Breaking Down the Penguins (Lack of) Top 6 Production So Far 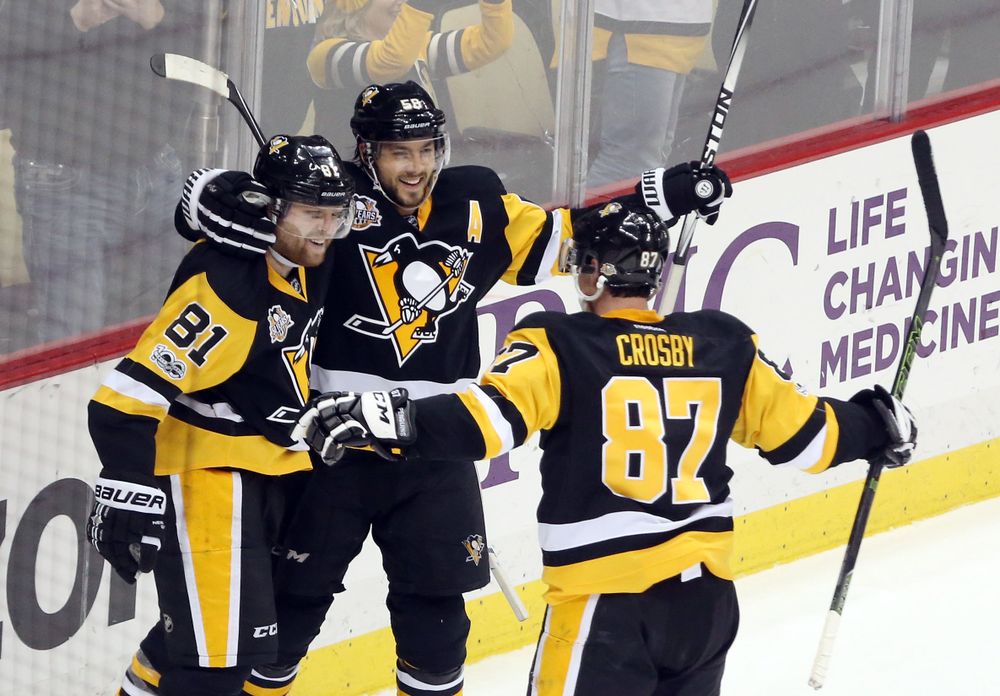 Breaking Down the Penguins (Lack of) Top 6 Production So Far

In the early part of the 2017-2018 season, it’s been a bit of a mixed bag for the Pittsburgh Penguins. Their Corsi numbers aren’t what one would call great. Both goalies are rocking a sub 900 save percentage thanks to a historically bad game in Chicago. They’re hanging out in the “fun” areas of graphs instead of the good ones. And ahead of the game against Florida, they were being led in scoring by Bryan Rust (Who the f*** is that guy?)

Some are saying it’s the grind of back-to-back cups creeping up on them. The truth is that it’s probably still way too early to make definitive statements about any teams. To get a decent sample size we’re going to need to wait until the ninth game of the season. That’s when they hit 500 minutes (540 to be specific but, it needs to be at least 500). Even then the sample size is still very small and only accounts for less than 11% of the season. But, that’s not the point.

The Penguins aren’t performing like the Vegas Golden Knights (yes, you read that right) so obviously Sidney Crosby, Evgeni Malkin, and Phil Kessel are getting old. Obviously losing flower to the expansion draft was a mistake. Well, I took a peek at the numbers and I’m here to tell you it’s not so much old as it is cold.

What does that mean? Let’s unpack.

Sidney Crosby, ahead of his two-goal outburst against Florida, was rocking a 7.1 s% (all of these numbers will be from NHL.com because I pulled them from the Penguins website itself). Now, for Norman Normal in the NHL that would be pretty common. But this isn’t Norman Normal. This is Sidney Crosby. His average shooting percentage usually clocks in around 13 and his career low is 10. So even if we’re looking at him at his least prolific as a scorer, he’s still been cold.

Of course, his outburst of 2 goals on 4 shots against the Panthers helped bring him up to 16 s% on the young season. Again, we need to caution that any sample under 500 minutes is probably too small. But it is important to note that it isn’t for lack of trying that Crosby doesn’t have more goals. More like lack of puck luck.

And Crosby isn’t alone. Yesterday, I saw someone write that the team needs more from its big three forwards. While this isn’t a wrong assessment (especially in the case of Evgeni Malkin) – it’s important to note it’s not for lack of effort.

Phil Kessel’s shooting percentage is a paltry 4.2. He is currently tied for the team lead in shots on goal at 24 (with Kris Letang but I’m not going to include him here because for all that he scores frequently he is a defenseman and I’m not in the habit of comparing apples to peppers) but they’re going in at an incredibly low rate. Since his joining the Penguins, Kessel has shot at an average rate of 9.7 so that number will almost assuredly go up. Which is again to say, he is trying hard enough they’re just not going in.

Finally, we have Evgeni Malkin. Malkin, the oldest of the three big scoring forwards, has probably been the worst early on. He’s been lazy and inattentive at times with the puck but that’s a different discussion for a different day. Today, we’re talking about his shooting percentage and his early season goal numbers.

The only times in his career Evgeni Malkin has posted a sub-10 shooting percentage was in his two most injury-laden seasons of 2010-2011 and 2012-2013. No, seriously. It’s kind of absurd how no one talks about that when you think about it… The last two years his numbers have been over 15 so it’s reasonable to assume that the 6.3 the Russian center currently sits at is bound to go up.

On the other side of the scale, early goings from Conor Sheary are just ridiculous. He’s putting pucks in the next almost 1/3 of the time. That is going to go down. Meanwhile, guys like Carl Hagelin are sitting at a big ole 0 in the shooting percentage column. And while Hagelin’s job isn’t necessarily to score a ton of goals – it’s only a matter of time.

The thing is that shooting percentages are averages and scoring, by nature, is streaky. All this to say, we are still really early but once some of these pucks start going in for the Penguins – look out.