Should the Knicks explore a trade for Bucks' wing Rashad Vaughn? 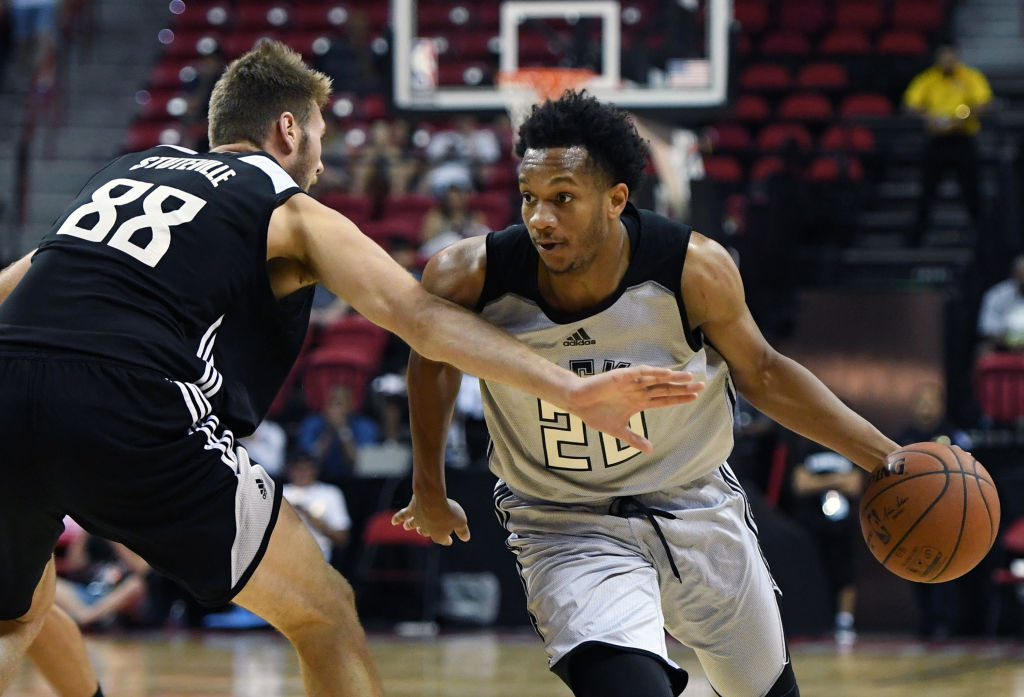 Should the Knicks explore a trade for Bucks' wing Rashad Vaughn?

With the start of the 2017-18 NBA Season just days away, the Knicks’ opening night roster appears to be set. As Steve Mills and Scott Perry have revamped this roster, it’s clear that the Knicks have an abundance of big men. In turn, the team is weak at the point guard position and will be forced to flex out its wing players to share time between shooting guard and small forward. As they assess different needs and consider how they can flip one or more of the aforementioned bigs for other assets, the Milwaukee Bucks have someone they may like available for trade.

According to Adrian Wojnarowski, Milwaukee is looking to move both Rashad Vaughn and John Henson, and would be willing to entice a trade partner to take on the former by adding a second round draft pick. The Knicks may be willing to explore such a deal, as they are already quite familiar with Vaughn. Pursuant to the NBA G League’s flex assignment rule, the 21 year old spent parts of two weeks with the affiliated Westchester Knicks last November. This allowed the organization’s minor league staff to work with him closely. Big league officials (like Steve Mills and Allan Houston) had an opportunity scout and evaluate him through local game action and feedback from the coaching staff. Before setting up shop for the Wisconsin Herd this season, the Bucks were without a minor league affiliate to call their own. The Knicks willingly allowed Vaughn to play for them and receive valuable experience. At the same time, this gave New York somewhat of an inside track on a prospect they otherwise would not have been privy to.

The former first round pick went on to average 12.3 points, shooting 47% from the field and 42% from deep in three appearances with Westchester. What does such experience mean, going forward?

If the Knicks liked what they saw before, there are definitely trade possibilities to explore now. With so many quality big men already on the roster (and the likes of Enes Kanter and Willy Hernangomez looking like potential starters to ponder for the long term), Kyle O’Quinn would look to be the most expendable (and easily as moveable — much more so than Joakim Noah) player. He’s very serviceable and is playing out an incredibly reasonable contract, so it would be imperative that New York acquires a pick or two in addition to Vaughn. If the Bucks were to use one of the team’s three trade exceptions, an O’Quinn for Vaughn swap would work straight up. The Knicks also have a trade exception from the Carmelo Anthony deal, so there are options to expand the deal a bit as well. Adding in Henson on behalf of the Bucks and Lance Thomas on behalf of the Knicks would also work. Given the Knicks’ glut of centers, acquiring Mirza Teletovic instead might make more sense. Despite being 32 years old, Teletovic has length and good shooting range. He would fit right in for New York as an international player who can help space the floor. The team has a glaring need for floor generals, so subbing in Matt Dellavedova would make the deal work financially as well, though that would appear less likely.

Such speculation is neither here or there if the Knicks are not interested in Vaughn. Having said that, looking to acquire him would make a lot of sense. He’s a former first round pick and the Bucks have been known to have a savvy scouting staff with success in recent years. At 21 years old, he’s still very young and looks to have plenty of potential. In addition to his success in Westchester, the young gun averaged 16 points on 52% shooting from the field to go along with 3.6 rebounds in 2017 NBA Summer League. Vaughn appeared in just 41 games last season due to injury and struggled to produce in limited action as he inched his way back. Still, there’s room to grow. With the Knicks’ newfound vision of exploring youthful and promising talent, having patience with Vaughn could make him an on-the-court asset in the years to come.