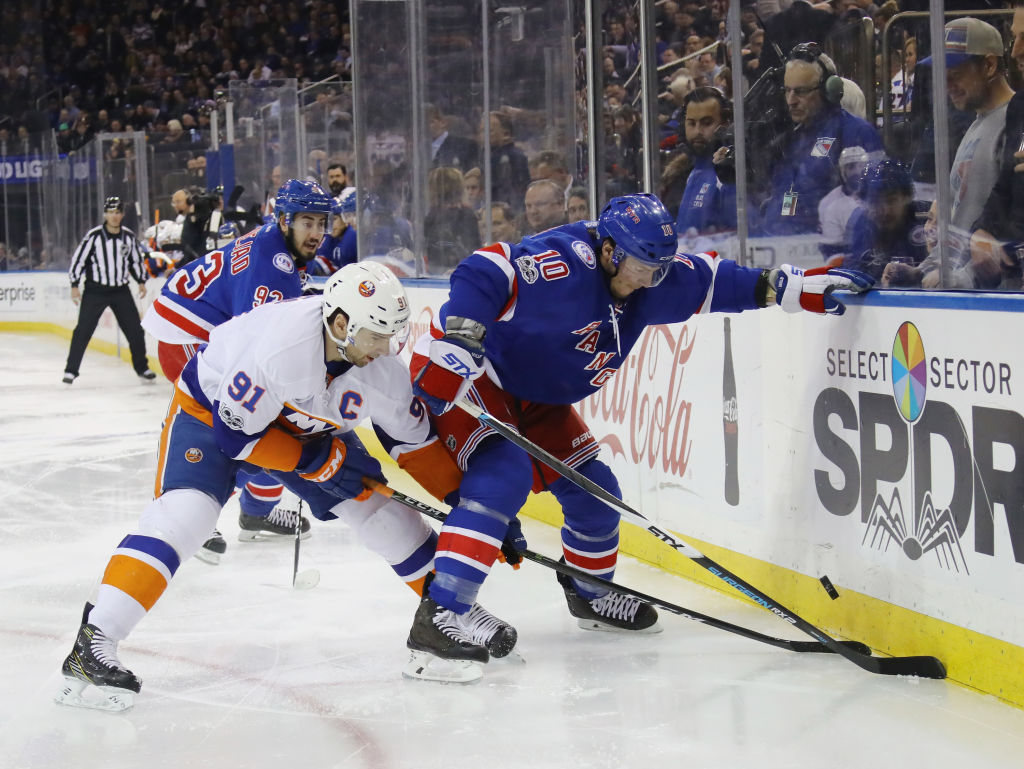 There has been no better time for an Islanders-Rangers rivalry game. Sure, we would trade this Thursday tilt for a playoff matchup. But, being that both teams are off to quiet starts, this infusion of excitement, intensity, bad blood is long overdue.

The Islanders are off to a less-than-stellar start, struggling on the power play and finding the back of the net, while their biggest rival can’t seem to find their 5-on-5 game early on. Call a doctor. Tell him to prescribe big hits, flashy goals and brash crowd chants. We need this.

“I think it comes at a good time,” said Captain John Tavares. “Coming off the west coast, sometimes you can be a little sluggish. We’ve got a few good practice days to get ready, but, the intensity of the rivalry and both fanbases are always great. Certainly, the points are big.”

The Islanders are 2-3-1 while their cross-river rivals are 1-5-1 through the first seven games. It’s not the start both teams wanted, especially with loftier expectations entering the 2017-2018 regular season. With the orange and blue having a slow start a season ago, all summer, the team stressed a quicker adjustment period to begin the year.

What hasn’t helped, the Islanders are 0-for-20 with the man advantage. It’s a statistic that concerns head coach Doug Weight as well as have the tendency to cripple team’s chances towards winning games.

“Nothing’s easily correctable, because you’ve got to do it,” Weight said when asked about his team’s 0-for-20 start on the power play. “I’m concerned about the power play. It could have easily won us a couple of games. We’ve got to get better, grittier and quicker with our puck movement, and get on it. The confidence hasn’t gone away but we have to keep doing things we’re doing well.”

Luckily for Weight’s team, a date with the Rangers always brings out the best in every player. It’s been the case for quite some time. Dating back to October 14, 2015, the Islanders have defeated the Rangers 10 times out of 13 chances. They’ve also outscored their rivals 48 to 30 in that span and are currently riding a three-game winning streak against the Rangers.

Veteran Andrew Ladd, who recently netted his 500th career NHL point on the west coast trip, said his team will be ready to go come Thursday evening at Madison Square Garden. The head coach shared the same sentiment. He admitted it’s a game each player circles on the calendar every season.

“It’s always a game you look at on the schedule,” Weight said. “Big rival, always fun to play in.”

Entering Thursday, the Islanders should be able to take advantage of a three day break before an expected intense game. Typically, teams struggle after a long trip across the country. With a mini break built in between, Jason Chimera thinks it can go both ways.

“It’s nice to have a couple of days break,” Chimera said. “But, it’s always a good game. It always has more hype to it than other games but it’s not hard to get up for Rangers-Islanders. It doesn’t matter where you’re from: Edmonton, Newfoundland or Sweden, you know Rangers-Islanders.

“Your neighbors, everyone lets you know how cool it’s going to be.”

This game comes at the perfect time. The early season is a lull with goals coming few and far between for both teams. The Islanders have yet to work out their kinks. What better way to test them on the ice against a rival who is struggling to get out of its own way? Like Chimera said, it’ll certainly be a “cool” game for both teams who are in desperate need for points. If you can’t get fired up for Rangers-Islanders, not much will.