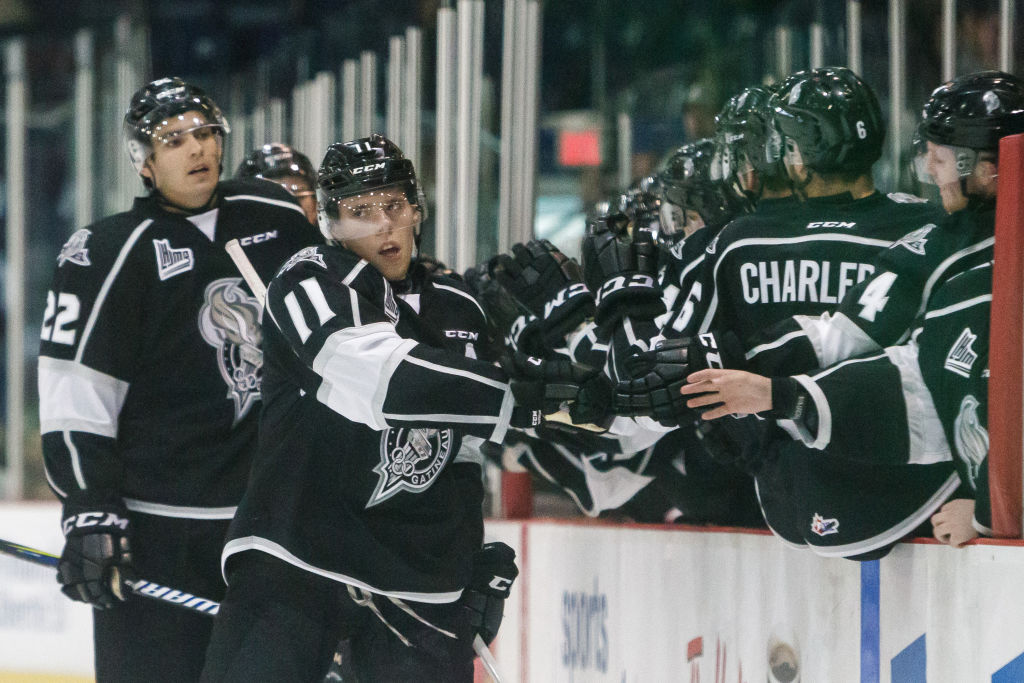 Hello, all. I’m finally, back with the weekly prospect recaps. I was going to start up last week with the Monsters beginning play…but then they laid a big old goose egg against Rockford in their only game.

So let’s pick up with the Monsters. This week it was off to Manitoba for a pair against the Moose. In the first game, Friday, the Moose took a 1-0 lead into the locker room before The Swiss Beast would strike. After a save, the Moose tried to clear the puck but Calvin Thurkauf gathered the puck before skating in and picking up his own rebound for his first pro goal and point. Miami alum, Carter Camper made it 2-1 with Hayden Hodgson picking up his first pro point to make it 2-1. The Moose and Monsters traded goals and Joe Pendenza scored twice to help the Monsters pick up a 4-3 victory. In the win Brad Thiessen made 26 saves.

In the rematch on Sunday, Matiss Kivlenieks made his pro debut and stopped 31 of 34 in a 4-1 loss. John Mitchell scored the only Monsters goal. Next week starts a string of four straight games against California teams with San Jose and Ontario (CA) coming to the Q.

For the first time in what seems like forever, I’ll have to keep track of a Jacket prospect playing in the ECHL along with a few Monsters signings that are also playing in the East Coast.

Just before the ECHL’s 30th anniversary season began, Jackets prospect Jacob Graves was assigned to the Quad City Mallards along with Monsters’ goalie Ivan Kulbakov. In the Mallards season opener, Jacob picked up an assist on Sam Warning’s goal to get the Fowls on the board after they went down 2-0 in what ended in a 3-2 loss to Toledo. The next night, Kulbakov made his pro debut against Tulsa. He stopped 27 of 31 for his first pro victory. Graves was in the starting lineup for both Quad City games. In the win, former Jackets prospect Keegan Kolesar had a three-point night and earned first star honors.

Staying in the ECHL, the Jacksonville IceMen received two Monsters players in Bobby MacIntyre and Scott Savage. Savage made IceMen history when he scored the first goal in franchise history just 3:32 into the game. Savage also picked up an assist in the 5-4 Jacksonville win. And here’s a random Columbus connection. The IceMen are coached by Columbus Chill great Jason “Smurf” Christie.

Now to do a bit of catch up on everyone else. Onto the rest of the prospects.

Kole Sherwood was expected to play in Cleveland this season but an ankle injury suffered in Traverse City threw a wrench into those plans and last week Kole was assigned back to the OHL’s Flint Firebirds. Kole didn’t dress in either of the Firebirds games last weekend, but I’m not sure if this is due to injury effects or just getting to the team.

Vitaly Abramov-Gatineau Olympiques (QMJHL)
Season Stats 4GP 3-5-8 +1 6PIM
After a five point weekend to open the season, The Meteor Man kept it going when he picked up an assist in a 4-3 Olympiques win. Early in the second, Abramov gathered a loose puck and attempted a wraparound. He lost the puck but Giordano Finoro drove the net to make it 1-1. Vitaly missed the Olympiques next game due to an injury that occurred during the team’s pregame sewer ball game (soccer game warm up).

Abramov made it back into the lineup to close out the week and he did what he does best. In the closing seconds of the first period, Vitaly checked the puck carrier and Pier-Olivier Lacombe plucked the puck out of the sky before passing to Abramov. He got behind the entire Remparts lineup and slid a backhand past Quebec’s goalie to make it 1-0 with tenths of a second remaining in the period. The Olympiques went on to win the game 3-2 in overtime.

A quick story to keep an eye on is the possibility of Vitaly being moved by the Olympique to begin a rebuild. Local reporter JF Plante reported three teams interested in Vitaly with a mystery fourth being interested in the high scoring Russian.

Robbie Stucker-Chicago Steel (USHL-Committed to Colorado College)
Season Stats 3GP 1-3-4 -1 6PIM
Robbie Stucker and the Steel only had one game this week and Stucker went without a point. But his four point opening weekend still has him second among USHL defenseman in scoring. Robbie currently has the highest point per game average among USHL defensemen.

Kale Howarth-Trail Smoke Eaters (BCHL-Committed to UConn)
Season Stats 12GP 10-11-21 14PIM
Kale kept his season opening point streak alive by picking up two assists in the Smokies 5-4 win over Victoria. The two assists gave him 11 on the season and 21 points total which is currently second among BCHL players. Due to an elbow injury, Kale missed Trail’s next game but the Smoke Eater’s play by play man made it seem like it’s not serious. Kale has 21 points in 12 games after putting up 59 in 51 games last year.

Jonathan Davidsson-Djurgarden (SHL)
Season Stats 9GP 2-1-3 -1 4PIM
Jonathan hooked up with his little brother Marcus to help Alexander Falk score his 1st goal of the season. Jonathan gathered a loose puck behind the net and passed to Marcus who sent the puck to a driving Falk. He hammered the puck home to make it 3-0 in a 6-0 DIF win.

Kevin Stenlund-HV71 (SHL)
Season Stats 2GP 1-0-1 +1 0PIM
What was probably supposed to be a breakout season for Kevin got off to a slow start. He missed eight straight games due to an injury before making an impact in his return on Saturday. In the second period of the game against Farjestad BK, Kevin got the puck out of a board battle and drove to the net. He fired a shot while being tripped to tie the game at 1 in a 4-2 Chainsaws loss.

Emil Bemstrom has been starring for the Leksands IF J20 team His 10 goals lead the team and puts him in a tie for the league lead. His 17 points is good enough for second in the entire league. You would think the club’s main team, which is in next to last place, would maybe give the offensive juggernaut a shot but what do I know.

I’d say going to Finland was a smart move for Jackets top pick Alexandre Texier. His three goals are tied with two other players for the team lead. Alexandre has been seeing anywhere from 11 to 13 minutes of ice time up until his last game where he was listed as the team’s 13th forward and saw no ice time.

Staying in Finland, after missing the opening of the Liiga season due to injury, Veeti Vainio is finally back playing. He was assigned to Kiekko-Vantaa in Finland’s Mestis league which is kinda like Finland’s AHL.

After missing all of last season, Daniil Tarasov has been playing well for Tolpar in Russia’s MHL. He’s earned four wins and two were shutouts. Lately though, Tarasov has not been dressing for the Pegasus. I was afraid he was injured, but when i asked the team account they told me he’s been traveling with the team’s KHL team HC Salavat Yulaev. He has yet to dress for any of those games.

Elvis Merzlikins-HC Lugano (National League A-Switzerland)
Season Stats 11GP .934Sv% 2.18GAA 7W 1SO
Lugano have been rolling lately. They’ve picked up six straight wins including a 24 save shutout by Elvis. During the streak, Elvis has played in five of the six games and stopped 158 of 165 shots for a .958 save percentage.

There you have it, folks, a recap of the start of the season for the Blue Jackets prospects from around the world.