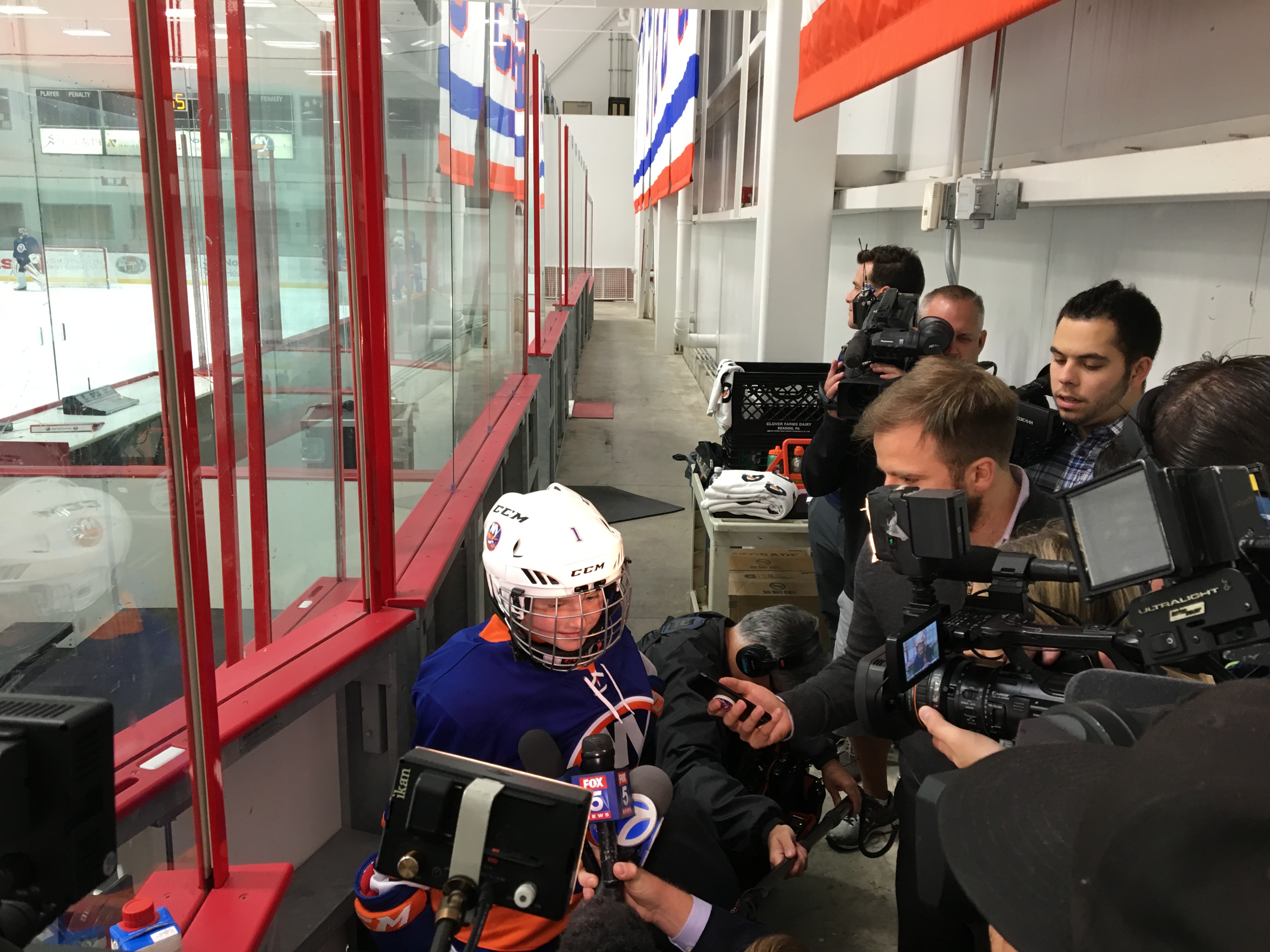 EAST MEADOW, N.Y. – The Islanders are battling their way out of a rough start to the 2017-18 season, but it paled in comparison to the struggle a person battling cancer goes through on a constant basis.

For 8-year-old Brandon Bloom his battle is with Stage 4 non-Hodgkin’s Lymphoma. The life-long Islanders fan has been treated for the disease since he was diagnosed with the disease last April, but on Tuesday he had the chance for a little reprieve from his daily fight.

Brandon was invited to be an Islander for the day, put together by the Leukemia & Lymphoma Society’s Random Acts of Light program. So Bloom and his family were at the Islanders practice facility eating breakfast with the team, sitting in on the pre-practice team meeting, putting on his own Islanders uniform and hitting the ice for practice. To cap it all off, he scored his first NHL goal on goaltender Thomas Greiss and players mobbed him after the puck crossed the line.

“I thought I would be so scared, but I had a lot of fun,” Brandon said as he sat at his own stall inside the team dressing room. As for his goal, Brandon called it “a dream come true.”

If this doesn’t make your day, I don’t know what will #Isles pic.twitter.com/yQkO3Qwd9y

The whole day could be considered a dream come true for the young boy from South Setauket. Brandon labeled the day a 100 on a scale from one to 10 when asked by reporters during a brief media scrum in the middle of practice.

And the Islanders newest member handled the press and the attention with poise that could have matched John Tavares. With camera’s following his every move, Brandon never took his eyes off the ice and the smile never left his face.

Across the rink, Brandon’s family never took their eyes off him as they took in a moment that their son rarely gets due to daily chemotherapy treatments and visits to the hospital.

“It’s just the most magical thing,” said Brandon’s mother Stefanie Bloom, whose smile was almost as big as her son’s on Tuesday. “He’s still going through treatment and he gets to take a break and forget about it for once and gets to enjoy the sport without actually being able to play it. This is just the best for a little boy like him.”

Brandon is no stranger to the Islanders. He had met several of the players already, including his favorite player Josh Bailey, who also had breakfast with Brandon before they hit the ice.

The 8-year-old with the wide smile was still on the ice as some of the players started to make their way back to the dressing room after practice. Andrew Ladd walked off and handed the puck Brandon had scored with to his mother. Casey Cizikas walked off before quickly return with tape and a marker to mark the significance of the puck.

Cal Clutterbuck walked over with a puck for his Brandon’s younger sister, who was shyly sitting next to her mom in the stands.

All the while Brandon remained on the ice to work on his hockey skills with John Tavares and several others. Skills that hadn’t been honed just yet because of the disease.

“He was teaching me how to push the puck and ice skate,” Brandon said when asked what Tavares was showing him.

Brandon will continue his treatments until August when doctors will reassess him. And while the day was one Brandon will likely never forget, the significance of the morning wasn’t lost on the players or coaches.

“It was a pretty cool experience and hopefully it’s something he’ll always remember and be a big confidence booster for him,” Tavares said.

Head coach Doug Weight added: “His eyes were wide for the last three and a half hours, so that was fun. We have good kids on our team so they love it.”