Isles Insights: Islanders down the Rangers in Shootout 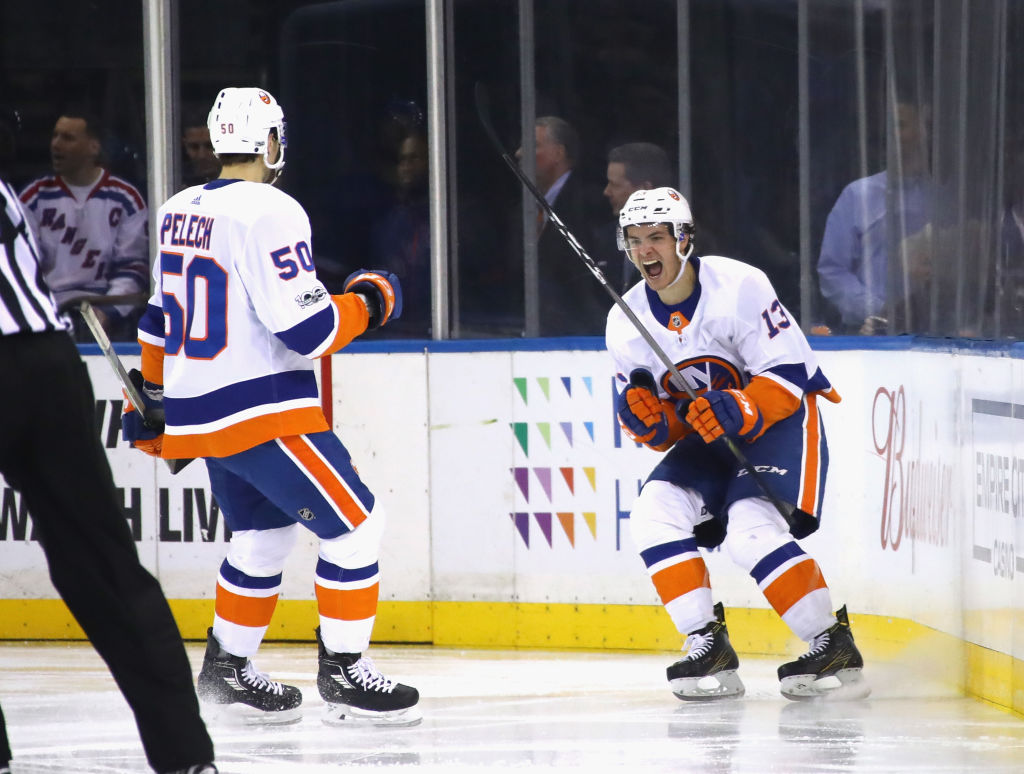 Isles Insights: Islanders down the Rangers in Shootout

NEW YORK — The Islanders left midtown Manhattan with two points on  Thursday night after allowing a two goal lead disappear in the third. Anders Lee, Brock Nelson and Mathew Barzal scored for the Islanders during regulation.

After five minutes of overtime failed to yield any results, it took a shootout to decide the  winner. Mats Zuccarello scored on the Rangers first shootout attempt, but Jordan Eberle and John Tavares converted on their attempts. Jaroslav Halak stopped stoned the next two Rangers shooters.

The Islanders jumped out to an early lead in the first period. Lee was able to bury a rebound from in front of the net to give the Isles their first power play goal of the season and a 1-0 lead at 2:40. The lead was short lived as the Rangers David Desharnais was able to even the score at one at the 5:02 mark.

READ: Barzal Shines on Broadway in Islanders Win Over Rangers

The Islanders recaptured the lead 1:04 later off Nelson’s team leading fourth goal of the year. Barzal added to the Islanders lead with his first career NHL goal 1:15 into the middle period. The Rangers pulled within one in the third period with a goal from Zuccarello.

The Islanders will host the San Jose Sharks on Sunday.

1. The Islanders finally converted on the power play. It took them 21 tries for it to finally happen, but Anders Lee was finally able to push the puck over the  goal line while the Islanders had a man-advantage. The Islanders power play unit played well during their first of three power play chances and were able to get the monkey off of their back with that goal. While the special teams wasn’t perfect the rest of the night, getting that first one out of the way was a step in the right direction.

“We made a couple of adjustments and things we wanted to emphasis,” Tavares said. It was a good job and nice to obviously get one. Get that monkey off our backs and hopefully it leads to more good opportunities and more results.”

2.  “We just needed a goal. I think we did some good things, we just needed to break through. WE needed to get a goal, it was early, it got us the lead. It kind of loosened the bench up a little bit.” — Doug Weight on the power play.

3. Ryan Pulock got his first taste on the power play against the Rangers. By the end of the night Pulock had played 3:18 on the man-advantage and had one shot that stood out on the Islanders second power play of the game. The Islanders defenseman was set up in the left side faceoff circle. Pulock didn’t get all of the shot, but it was enough to see the force that he can put behind a shot.

The one drawback from the young defenseman was his hesitation at times throughout the night to shoot the puck when he had it. He had three shots during 8:43 of playing time. If Pulock can be a little less hesitant with his shot the Islanders will have another offensive weapon on the blue line.

4. Speaking of the young players on the Islanders, Mathew Barzal was one of the best players on the ice Thursday night. The rookie scored his first NHL goal on another impressive rush into the Rangers zone and then backhanding the puck past Henrik Lundqvist. The goal was reminiscent of the one he scored against the New Jersey Devils during the preseason. That shot may have been the one that found the back of the net, but Barzal came pretty close to scoring on several occasions during the night.

“You know when you’re a scorer it wears on you, certainly for his first goal, even if he had been playing well and doing some good things, it was important for him to get it,” head coach Doug Weight said. “You could see it almost got him a little too light on his feet. He was flying around the next couple of shifts, I was a little worried about him. Making plays all over the place but it was good to see. He played a good game after that, it was a nice goal.”

5. On the flip side of that, Josh Ho-Sang found himself sitting on the bench for almost all of the third period. Ho-Sang has is as skilled as they come, but that has gotten him into trouble including against the Rangers on Thursday and he went over his shift time a few times. Ho-Sang played 12 shifts, eight of which were over 50 seconds.  Six of those eight shifts were more than a minute. The rookie also has had a habit of over-handling the puck when he is on the ice

“There are habits you got to break,” Weight said. “Its not about him not caring, its not about him taking a leak* on the system or anything like that. He just loves to play hockey and he got himself carried a way a little bit. You got to shorten the shifts a little bit, it’s a team game. Will speak about it.”

6. The Third period was the Rangers biggest push of the night. The Islanders caught a break when Brendan Smith’s game-tying goal was disallowed because of a kicking motion, but even that didn’t stem the Rangers momentum in the final 20-minutes of the game. Kevin Hayes tied it up at 14:06. Shots were even in the third, but it felt as if the Rangers had an onslaught of chances.

“We knew they were going to push and maybe sat back too much,” Brock Nelson said. “We stopped making plays we were making in the first couple of periods and it comes back to bite you and they tie it up. It’s a good job by Jaro. A couple of big saves there. We needed it to keep it tied up and then to get to overtime. A couple nice moves in the shootout.”

7. Halak made 38 saves in the win for the Islanders and can add another notch in the win column against the Rangers. The Islanders starter’s only gaffe really came in the shootout when he initially stopped Zuccarello’s shot, but kicked it into the net when it landed behind him.

“It was an unfortunate bounce – one of those where I tried to seal the post and it somehow went in,” Halak said. “It looked like the puck hit ice, and found a way. I think we didn’t panic, we stayed with it. We had chances at the end of the game, in overtime, that just didn’t go in. But I’m happy for the shootout win and we just need to build on it.”

8. Brock Nelson scored his team leading fourth goal of the season on Thursday night. He has points in four of the last five games and is tied for the team lead with five.

9. The Islanders made a few costly turnovers during the course of the game. Lee’s turnover in his own end helped set up the Zuccarello goal which brought the Rangers back within one and allowed them to gain the momentum in the third. Scott Mayfield had a turnover that Rick Nash nearly scored on moments later, but the Rangers star hit the post.

10. A win is a win, but the Islanders will need to find to stay away from having a third period like they did on Thursday. They have three winnable games coming up with San Jose, Arizona and Minnesota coming up. The Islanders have done good things here and there — not as consistently as needed — and they need to find a way to do that on a consistent basis.