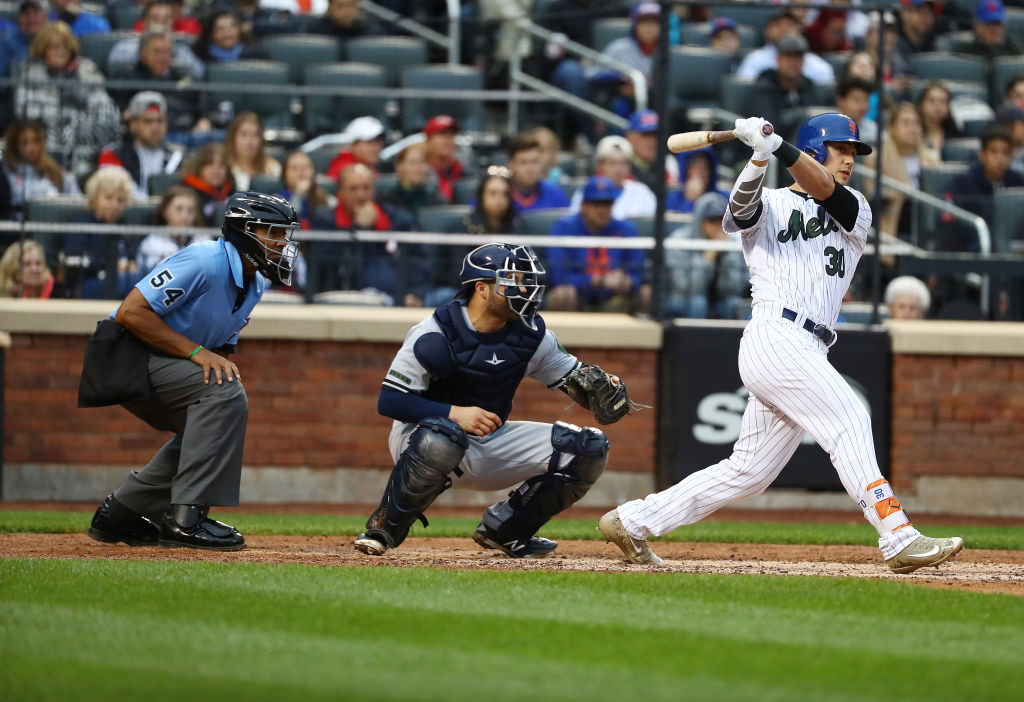 Now that the 2017 season is over for the New York Mets, we have been looking back at the year that was. After taking a more general view of the offense, pitching, and coaching staff, it’s time to take a look back at the Mets’ players. This series will take a look at every player on the active roster for the Mets at the end of season from A (Nori Aoki) to W (David Wright). The review will look at their season statistics, stories, and what role (if any) they will have next season. We continue our series today with a look at outfielder Michael Conforto.

NEW YORK, NY – MAY 29: Michael Conforto #30 of the New York Mets drives in Rene Rivera #44 with a double in the fifth inning during their game at Citi Field on May 29, 2017 in New York City. (Photo by Al Bello/Getty Images)

Story: After a rough 2016 season, Michael Conforto came into spring training needing to prove himself. Conforto raked in camp, but the Mets planned on sending him to Triple-A Las Vegas to start the season since their starting outfield was full. An injury to Juan Lagares in the last week of spring scrapped that plan, earning Conforto a bench spot on the Opening Day roster. Conforto took the role in stride, hitting when he did get chances to play, eventually earning more opportunities from manager Terry Collins. An injury to Yoenis Cespedes created an everyday job for Conforto, and he seized his opportunity by doing nothing but hit. Conforto was bumped up to the leadoff spot around the same time, a move that agreed with him as he batted .280 with 20 homers and 45 RBI’s atop the order.

A strong first half helped Conforto earn his first All Star appearance, and he used that trip to the Mid-Summer Classic as a springboard into the second half. Conforto continued to hit well after the All Star Break, batting .270 with 13 homers and 27 RBI’s, numbers that were very impressive since the lineup around him continued to deteriorate thanks to trades. The magic carpet ride came to a crashing halt for Conforto on August 24th, when he went down with a dislocated shoulder swinging at a fastball from Arizona’s Robbie Ray. That swing also caused a capsule tear in Conforto’s shoulder, ending his breakout season five weeks early and casting a cloud over his immediate future.

Conforto was an excellent player for the Mets in 2017, delivering All Star worthy numbers as a 24 year old. The return of Conforto’s tremendous opposite field skills were key to his breakout campaign, one that the Mets hope he can build on going forward.

Conforto is a lock to be back next season, and he will be the Mets’ starting right fielder at some point. The question is simply when he will be ready to return from that shoulder injury. Conforto underwent successful surgery to repair the shoulder, and he should be able to return at 100%, but his timetable is a bit loose at the moment. There is a chance that Conforto won’t be ready to start the season, so the Mets may need a place holder for a few weeks as he rounds back into game shape. Given the Mets’ luck with injuries this year they would happily sign for five productive months of Conforto next year.

Check back tomorrow as our Player Review Series continues with a look at catcher Travis d’Arnaud!