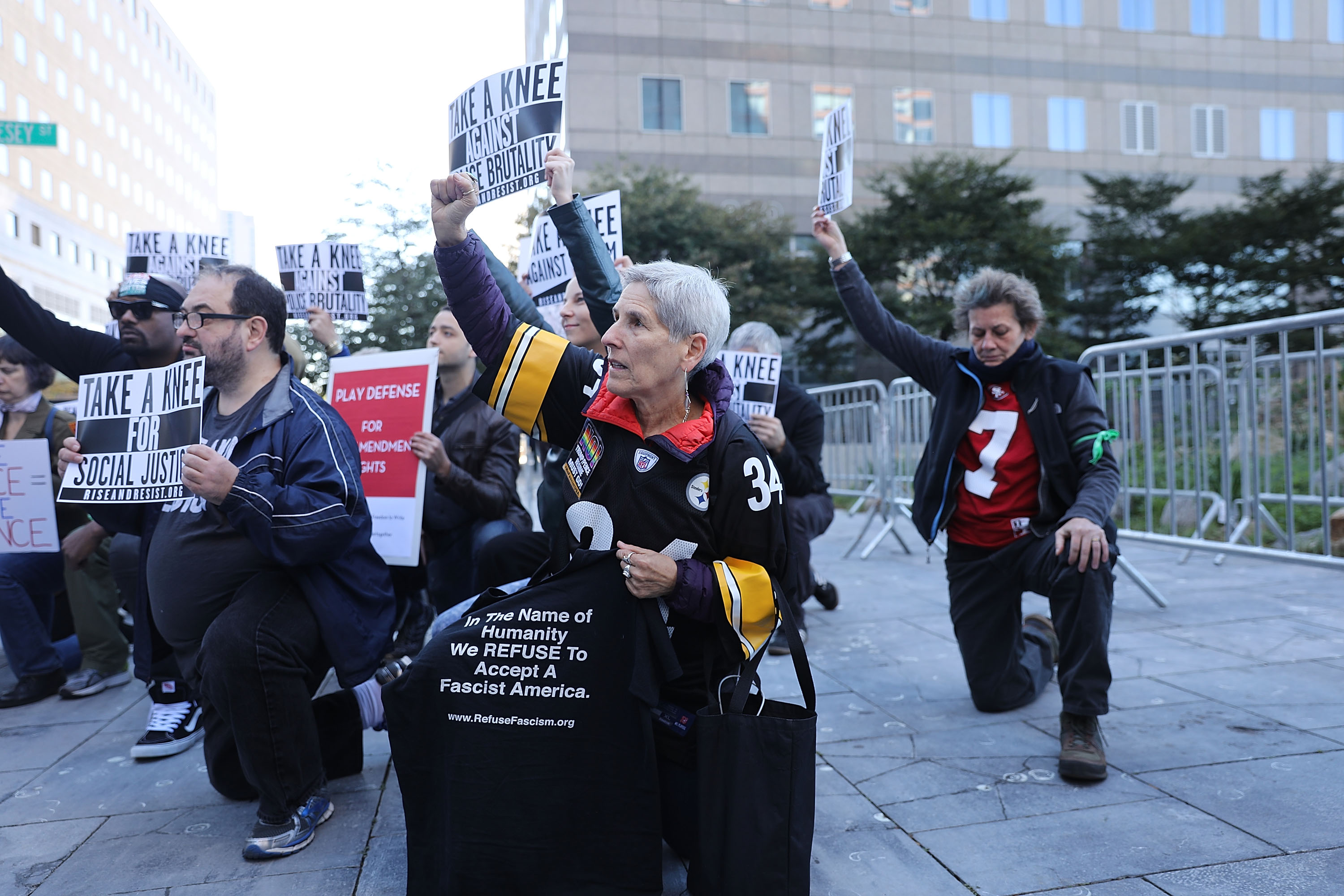 Full disclosure – I freelance a bit for the Buffalo News, covering the John Murphy Show. Because of that, I daily get a hyper-focused dose of the fandom of Western New York, and the #OneBuffalo slant to things that are surrounding the team.

It’s a blessing in terms of a nice gig with people that genuinely try to provide great content and a curse every time I hear the “Peterman would’ve won” rejoinder.

But what’s gotten under my skin the last few weeks has been the coverage of the pre-game protests by players. Instead of taking the facts of the why’s and the what’s of the protest – there are instances where John Murphy will intimate that this is just akin to holding one’s breath until you get your way on an issue. Considering this was sparked by a man stating “I can’t breathe” amongst the host of black and brown bodies laid slain – I want to underline the dangerousness of that mindset.

This week, the Bills, led by Lorenzo Alexander held several community outreach programs on their Tuesday day off. While this is commendable, as Lorenzo mentioned during his appearance on the the John Murphy Show, to John this was a great way for players to “put action” behind their protests.

A lot of what John Murphy and others have said are the dangerously benign commentary of moderation. However, when you look at it in the lens of the big picture as Leah Rigueur has in her piece, cited below, a lot becomes clearer to me.

When John Murphy  or anyone with a media reach declares they’re glad that players are putting their money where their mouth is with protests, they are also obtusely ignoring the fact that the protest’s goal is for those with a voice, with volition to assist in the plight of the protest. It’s akin to telling someone who is calling 9-1-1 for assistance, “Well I’d really appreciate if you stopped calling and started helping yourself out.”

Imagine this in the heart of the civil rights movement.

“I really wish these people wouldn’t sit in the front of the bus, they’re making a scene!”

“That MLK, marching to and fro – doesn’t he know people have to drive on those roads to work?”

You get the idea. In fact, reading MLK’s letter to the white moderate would be a great thing nationally to do – not just about the issues of systemic racism and oppression – but in the power of the male gaze and how misogyny can pervert someone’s dream of being an actor, or director, or teacher or just to exist into something out of the worst SVU episodes. Being the “both sides” person doesn’t help anyone or anything change. You merely just accept what is as what will be.

Because I think about all of my interests, my life even in this mixing pot and not in little silos, this discussion bleeds into what was said during the recent Marvel comics “Secret Empire” storyline. Many were disgusted (myself as well at first) – with the idea of Captain America being turned into a fascist. However, as you analyzed it further, such as Kriss, Dpalm and Justin did on their recap of the series – you get to the heart of what is wrong with not just white moderates, but anyone who ignores the power of privilege in society:

“And this is not just white people, this is privilege in general. If you are in a privileged class or you have privilege you have to confront your privilege. You can’t just sit on the sideline and be comfortable with it – you have to have that battle internally. You can’t just- if you don’t have that internal battle, the war will never be won. There’s only but so much people that don’t have the power, and don’t have the privilege can do. We can scream until we’re blue in the face – if you don’t ever decide to stand up and fight and face the ugly reflections inside of you, nothing’s ever going to happen – nothing’s ever going to [expletive deleted] change. That’s literally what this book is saying! What are we doing here?!”

You have to confront it. Whether it’s the junior Weinstein in your friend group, the person who says the inappropriate joke, or the radio host who determines that players are the sole arbiters of social justice. And you have to confront it, when said host asks blithely why Tyrod Taylor can’t give the answers that Micah Hyde gives to the media, or when no one wonders aloud why it took Buffalo News’ Kimberley Martin to get Tyrod Taylor to be honest without worrying his interviewer had an agenda or presupposed story to sell.

So at some point, I hope these points get through – either with a helpful aside from Donald Jones, or some self reflexion on the importance of allies.

Either way, I’ll be listening.