Happy Football Friday to you, Followers. Hope you have had a terrific week!

Last week, your now 15th ranked Washington State Cougars entered the hazy dusk of Northern California, and pardon the pun, got soundly SMOKED by the Golden Bears.  While I provided my recap of the game in this “Mourning After” post last Saturday, I wanted to take a quick moment to re-hash the concerns I advance in last week’s Football Friday post.  As I wrote:

This concern wasn’t particularly evident in Friday’s catastrophe (James Williams’ face mask notwithstanding).  But the issue still looms as significant this week, especially with Tavares Martin out of the game.

Inability to consistently run (or try to run) the ball to keep teams honest?  Check.

Let’s see.  Re-occurring Punting nightmare?  Check2.  Last week, one punt went for one yard, while another netted +7 yards and finished on our 23 yard line.  Each punt served as a turnover. Each resulted in a first half CAL touchdown.  #Brutal

Now, if we wanted to, we could add another mounting concern about this team—namely Luke Falk’s tendency to hold on to the ball too long.  But honestly, I don’t want to go there.  Moreoever, irrespective of what happens this week, I won’t go there next week either.

So, here’s the deal from my perspective—and I touched on this a bit on Saturday—there comes a time when teams  have seen so much of you that they start to figure you out.  And at this point in Luke Falk’s career, teams have not only figured out how to beat him and the Cougars, they are in the practice of perfecting it.  Their strategy? Try to get a good rush with 3-4 linemen, mix in some stunts, drop 7-8, play the safeties deep enough to take away the deep ball, rally to the check down with 3-4 guys, and watch Falk and the Cougars melt in the process.

Of course, the remedy to all of this is simple:  And that remedy is to run the damn football.  And when I say “run the football,” I’m not talking about those slow horizontal runs behind Dillard and the Continent, but quick hits that are directed straight up the middle of the defense.  Put a hat on a hat across the lines and let Morrow, Williams, and WICKS (?) do their thing.

And like I said on Saturday, once you do that, then the rest of the field opens up for Falk and his receivers. And when that happens, THERE IS NO STOPPING FALK AND THE AIR RAID.

Moreover, as we saw last week against CAL—who was giving up NOTHING through the air in the Red Zone–if you want to score touchdowns off non-explosive plays in this league, you need to run the ball into the endzone. 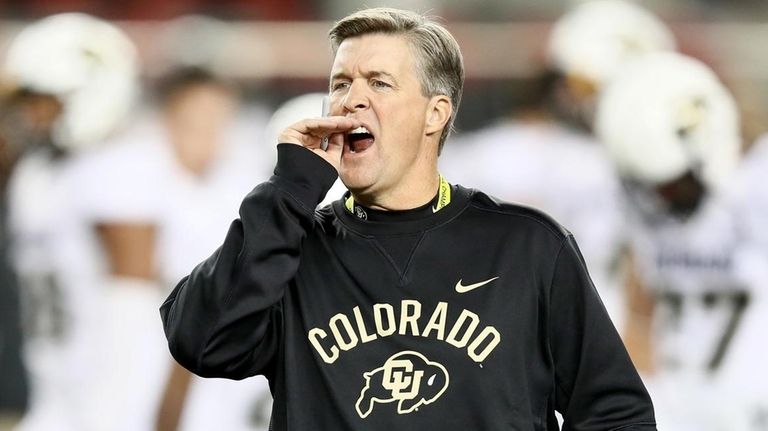 So with that rant mini-rant firmly in mind, I give you the Colorado Buffaloes.  This is a team that can’t stop the run to save their lives and to make matters worse (for them), they can’t mount a decent pass rush either. Their secondary and corners are pretty good, but as we saw with past Cougar teams, no secondary can hold up if the D-Line isn’t able to put pressure on the quarterback.

So, if you’re looking for an instant remedy for what is ailing this WSU Football team, Colorado is your prime candidate.

Unfortunately, Saturday night appears to offer a much more formidable opponent for the Cougars:  The weather.  The Weather Channel is calling for a wet, chilly 43 degrees (brrr…) night, winds between 15-20 mph with gusts over 40mph. And while I’m no Jeff Renner, that’s tropical storm force gusts, folks.

And when you factor in that Colorado’s primary (only?) strength as a football team is its ground game, and well, you have the recipe for what could be an absolute nightmare for WSU fans—we get behind early, get worn down on D as the game progresses, and Luke Falk suffers from untimely drops and turnovers that are caused by the wind and rain.

So, given that the weather figures to be a deciding factor in this game, the three keys are as follows:

If we do two of those three things,  we will win–perhaps handily.  Do only one of those things and this game is going to look like a watered down version of last week’s game.

And of course, a failure to win this game would be more than unfortunate . Because honestly, in optimal conditions, I think we would have rebounded to beat this Colorado team by three touchdowns.

THE KEYS TO WINNING:

Will Luke Falk Throw for 400 Yards?  Nope.  We might hope for 280 with a better touchdown to turnover ratio.  I am going 275, 2 touchdowns and 2 wind/rain caused picks.

Will WSU Rush for 100 Yards?  This question, in my book, is the question of the game and, as I’ve noted above, probably the season.  My sense is that we are not going to hit this benchmark because I think that the weather conditions plus the loss of Tavares Martin will result in Colorado stacking the box a bit.

Will WSU win the turnover battle?  I say no.  And this is why scoring early is so darn important.  Because if WSU can take an early lead, then the impetus is going to be on Montes to throw, and I think he has the ability to turn the ball over A LOT in poor conditions.  But if Colorado forces WSU into the mid-to-long range passing game in the wind and rain because we can’t run the ball, then you have to think that Falk is bound to sail a couple. Let’s call it -1.

Final Prediction. This is a hard one to call because, like I’ve said, I think we are MUCH better than Colorado and given decent conditions—I think we would shake off whatever “yips” still exist from last week and cruise to the tune of something like 42-20.

But the weather is going to make it hard, I think, for Luke and the O-Line to find much needed confidence and rhythm.  Moreover, as we saw last week, while I like our new Middle Linebackers, I don’t like their durability if they’re on the field a long time against a back like Lindsday and a QB who can make you pay with his legs if you cheat and/or miss assignments. Moreover, when you factor in that Colorado has a few TE sets that like to use, that’s adds to the probability of a couple of major assignment errors that prove costly in tight, low scoring affairs.

In the end, I am hoping that our young men—who I happen to still think are really good—prove me ridiculously wrong on this one and light the Buffs up early and often. But based solely on the weather report and the factors noted above, I’m calling this one 24-17 Buffs in a homecoming loss that what will send a panic storm throughout Cougar Nation.

(And I’ll be leading that panic!  You can watch the meltdown on twitter @CougSutra if you’d like)

Notre Dame 35 USC 31.  I don’t see a blow-out in this one like some others because I happen to think the Pac-12 is a bit underrated nationally. But given USC’s injury problems, it might be telling about how good they really are if the score is this close!

Arizona State 35  Utah 23.  One of the more curious results of last weekend’s game is the lack of discussion paid to ASU—a team that is sitting there one-half game back of the South lead.  To be sure, it had to help that they had two weeks to prepare for UW, but to me, ASU appears to be a fast team that is starting to figure it out under a new Offensive AND Defensive Coordinator.  They’ve already beaten Oregon with Herbert, UW, and after this weekend, the mighty Utes.

Arizona 41 CAL 28.  One of the factors lost in last week’s debacle at CAL was Jamal Morrow’s 53 first half rushing yards in spite of not getting many touches.  Here’s to thinking that Tate might add a “1” in front of that total. And that also might be in a half.

Oregon 28 UCLA 24.   UCLA can’t stop the run and Oregon is still really, really fast.  Oregon’s defense can’t stop the run, but UCLA can’t run it either.   So, here’s to thinking that this one might turn into the same kind of quasi defensive struggle that we saw a few week’s back in the UCLA/Colorado game.  Only this time, I think the Ducks will send Mora to the unemployment line.

Penn State 34  Michigan 17.   Earlier in the week, I heard Ivan Maisel call Michigan the most overrated top 15-20 team that he’s seen in a long time.  Meanwhile, Penn State is for real, IMO. I just think that Michigan’s defense is just good enough to keep the score respectable.

That’s all the time I have for today.  Hope you all have a great weekend—and let’s all hope that our Cougs can find a way to a W this weekend. Doesn’t matter how–#JustWin.