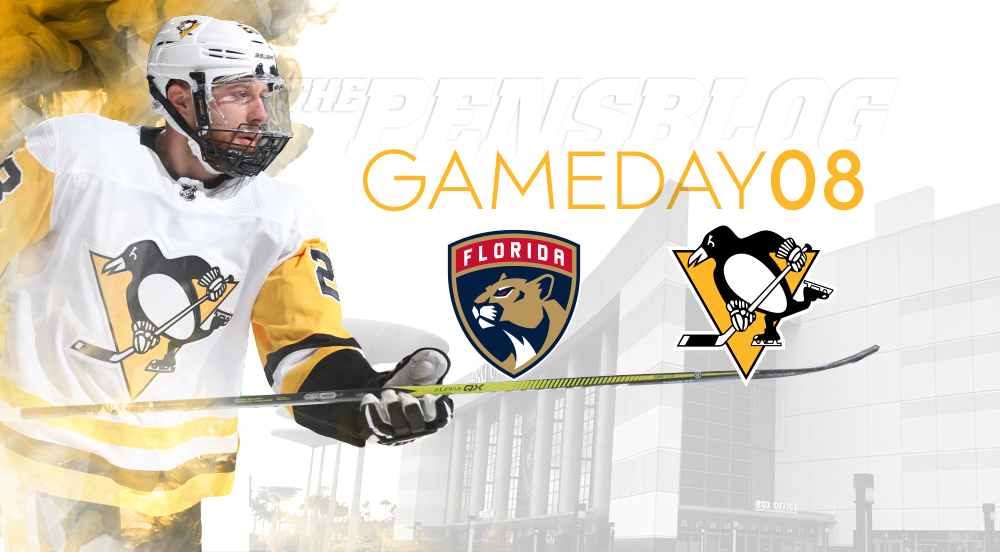 The Penguins were able to grab some much needed rest with two whole days off following their overtime win at Madison Square Garden on Tuesday. The team is back on the road however (a theme for the first half of the season) for another back-to-back weekend situation (also a theme). Mike Sullivan continues to be the gift that keeps giving:

Last Saturday the Penguins knocked off the Panthers 4-3, a brief recap from G-Off:

The Pens held on through 46 shots against and 5 powerplay chances against to bump themselves above .500 6 games into the season.

Matt Murray was, by and large, brilliant in this one, making 43 saves.  But his great was probably overshadowed by Crosby being a damn warlock in the two goals he scored.  Spoiler alert: they were pornographic.

The 2018 Quebec Nordiques, I mean Panthers went on to lose to the lesser of the two Pennsylvania teams on Tuesday night falling 5-1 to bring their record to 2-3-0 on the year. Following a preseason where they handed out new job titles to people who already had job titles it is safe to assume the Panthers currently do not know who in the fuck they are. Looking through the roster the Panthers have some solid young offensive talent but instead of supplementing that talent with veteran leadership they have decided to fill the holes with even younger unproven talent. It’s equivalent to a scenario where the 2009 Penguins decide that to add depth with a young Crosby and Malkin they would use Angelo Esposito and Chris Conner.

The Panthers had perhaps the best player coach in the league the last few seasons in Jaromir Jagr, with the age of this group I think not resigning him was a big mistake only because of how much he could teach the team.

It’s players like Jagr, Jussi Jokinen and hell even Thornton, okay not Thornton, fuck that guy, that the Panthers are missing. Having 4 really good young forwards under the age of 25 is not a bad position to be in for a rebuilding franchise, but when your only veteran presence is Radim Vrbata and captain(????) Derek MacKenzie you’re doing it wrong. Like I say with every Atlantic team, the benefit they have is playing in a division that should be named the American Dream because every team has a chance.

The Penguins put Matt Hunwick on IR Tuesday for a concussion that occurred during Mondays practice, he will be on IR for a minimum of one week. In addition they also sent press box gazer Chris Summers back to WBS for some more reps and replaced him with Zach Trotman. So far Sullivan has started Murray in the first of back-to-backs but it wouldn’t surprise me too much to see him give Niemi a go tonight and Murray in Tampa; the only issue is the Pens have played like shit in the second game so far this year so it runs a risk of two losses if when Niemi can’t perform and the team shits the bed the next night. Sullivan gets paid the big bucks and hasn’t let us down yet, I’m sure he will choose the right guy. The Panthers are very top heavy in forward distribution which opens up some nice mismatches for the bottom 6 if they can execute.

Letang has (as usual) flown under the radar in the first 7 games mainly because he only has 1 goal and 3 assists with a -4 rating so far. Letang has been showing us all how much we missed his closing speed and overall heads up defense, especially on this desperation stick lift in New York.

Last weekend Letang played 53 minutes between the two games. That’s 7 minutes shy of a whole game, also known as ridiculous for a dude who had a herniated disc in his neck requiring surgery 5 months ago. While I would prefer Letang to be under 25 a night this early in the season I am not going to argue with it because he is truly playing some great hockey, and I feel like tonight would be a good time for him to score. Being the blessed fanbase we are it is easy to overlook sound defensive play while always keeping eyes on the hotshot offensive production. Letang deserves a ton of credit on the defensive side of the puck in the early going of this season.

Huberdeau has looked fresh in the early part of this season and notched 2 goals in the last meeting against the Penguins. After only playing 31 games last year due to injury the young forward is hoping his 6th season (when did that happen, I feel like he was just drafted) will be his best. He has seemed to develop early chemistry with Evgenii Dadonov who recorded two assists against the Pens. The success of these two will most likely be challenged by the Letang Dumoulin pairing, which should go the Pens way but Huberdeau is a sneaky son of a bitch and finds himself alone in front often.

The Penguins should be somewhat rested even if it was only 2 days. Florida is struggling to find an identity behind their new coach and much like the Rangers game this isn’t one you want to let slip away, the more points you get now the more forgiveness you allow when the end of October/early November hell schedule begins. If you’re in the Florida area, go to this game… 4 tickets+4 hotdogs+4 drinks+ 4 popcorns starting at $99 = Quebec