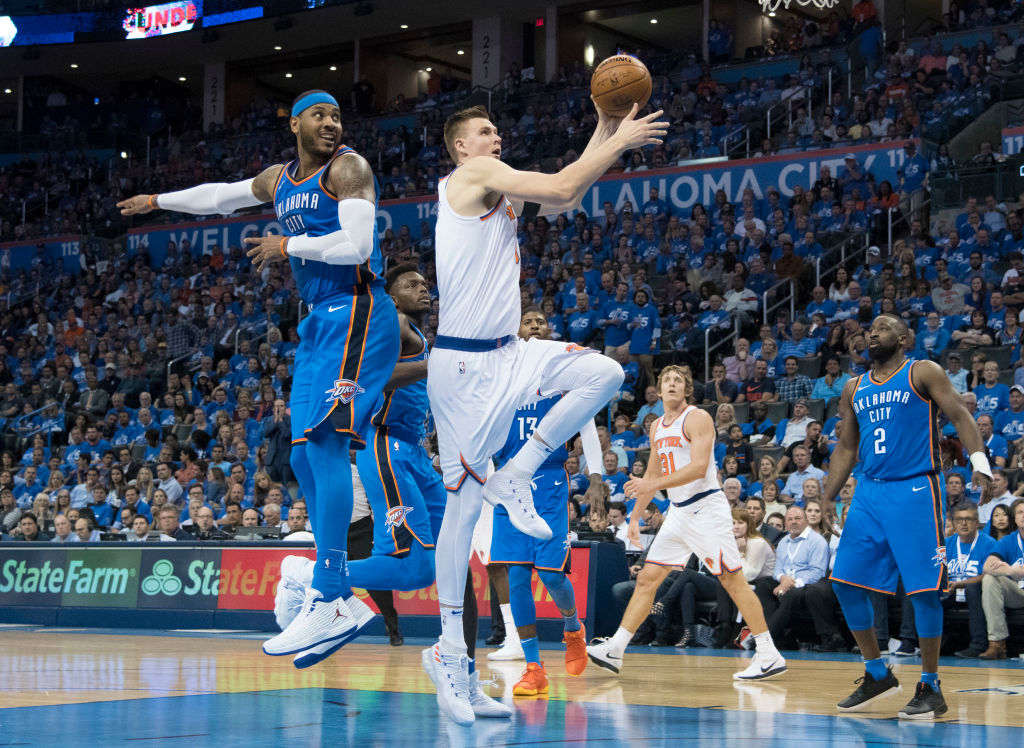 As the Knicks approach the start of this new season, it’s clear that the team will be going through a transitional period and patience will be needed. That being said, this youthful squad paced themselves by sticking with the firepower of the Oklahoma City Thunder through the early goings of opening night. The game was tied at 40 a piece, and for a hot minute, it looked like New York may be playing decent defense with OKC struggling to find a rhythm.

But alas, it proved to simply be first game jitters for Carmelo Anthony and the new look Thunder, much more so than anything that could be credited to something positive the Knicks were doing on that end of the floor. When the home team found their stride, they capped off the first half with a 13-2 run and never looked back. They took the opportunity in the second half to drown New York in their sorrows of what could be a rather painful rebuilding year, winning 105-84.

It’s been well noted that the Knicks are sure to struggle defensively in this new campaign. With offensive-minded players like Tim Hardaway Jr., Enes Kanter, and Doug McDermott representing the team’s top summer acquisitions, it’s easy to understand that reeling in a defensive stopper or two wasn’t exactly a priority. Still, as the Thunder made adjustments and experienced some growing pains of their own, New York may have arguably been able to stay afloat with their opponent, had they matched the offensive prowess (a la the Mike D’Antoni method). With Anthony’s 22 points now gracing the other side of the box score, his former team actually struggled to score and that came as a bit of a surprise.

Kristaps Porzingis certainly looked ready to step into his mentor’s shoes. Emerging as a man among boys, Porzingis gave Anthony some trouble inside and was undoubtedly in attack mode. In his first night as the team’s primary option, the big man flirted with his career-high of 35 by tallying 31 points on 11 of 25 from the field to go with 12 rebounds. He also converted on 7 of 9 shots from the charity stripe. Porzingis was red hot and undeterred, but his game lacked refinement. He was too aggressive, focused on overpowering opponents with dunk after dunk that failed to go in. It would have been beneficial to mix up his offensive approach. Unfortunately for Porzingis, he didn’t receive much help at all.

Beyond the 22 year old, just one Knick (Enes Kanter, 10 points) scored in double-figures. Perhaps even more telling, about the Knicks’ lack of offensive prowess, was the fact that just two players (Kanter and Tim Hardaway Jr.) hoisted up ten shots or more. Given all of the team’s offensive-minded players, such hesitation was very surprising to see. Players were rather tentative, looking unsure and/or uninterested in shooting the basketball. The staff needs to encourage everyone to begin stepping up. Players will need to embrace new roles and take on more responsibility in the wake of Anthony’s departure. It didn’t appear as though they were ready to do that just yet.

Moreover, Coach Jeff Hornacek’s rotation gave way to some cause for concern. Last season’s rookie revelation in Willy Hernangomez didn’t take the court until the game was out of reach, logging just 4 minutes in garbage time. New York’s poor flow on offense could be attributed to a lack of leadership and sloppy ball movement. Ron Baker, a more natural two-guard, played the most minutes at point guard and committed four turnovers in 23 minutes. Frank Ntilikina, this past summer’s No.8 pick, played just 8 minutes in his debut.

The Knicks did play a scrappy brand of basketball, which could help them develop some heart on the defensive end this season. But in order to embrace a new identity, they need to run and gun offensively and players need to know when to shoot their shot(s). To help guys find their flow, Coach Hornacek needs to settle on a rotation sooner than later. It would be beneficial for long term hopes if that rotation gave more of the team’s promising youth opportunities to shine.