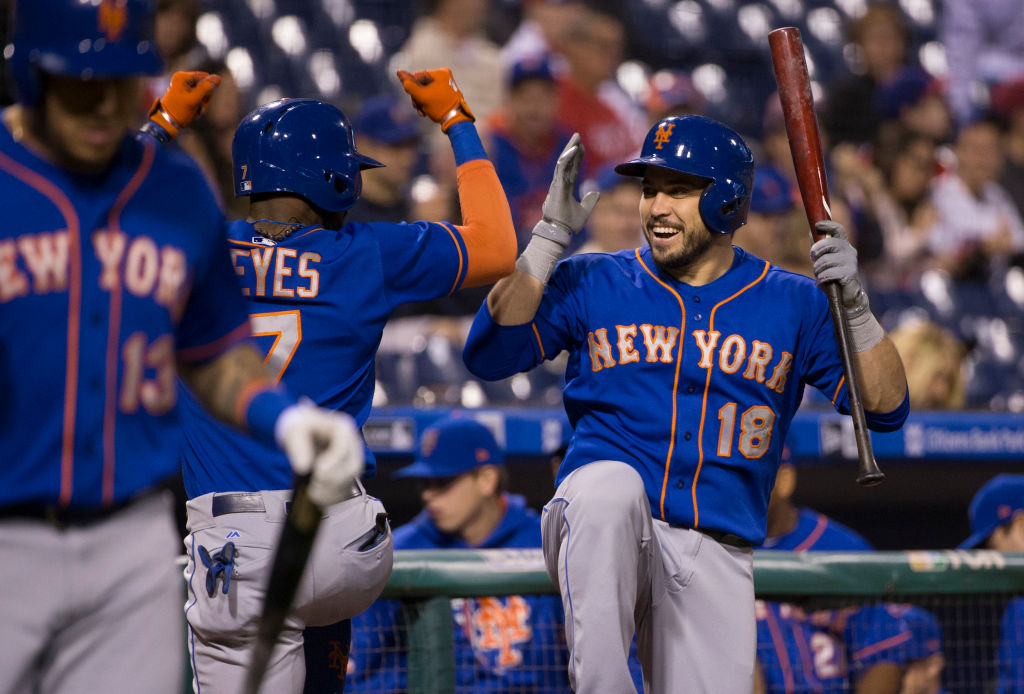 Now that the 2017 season is over for the New York Mets, we have been looking back at the year that was. After taking a more general view of the offense, pitching, and coaching staff, it’s time to take a look back at the Mets’ players. This series will take a look at every player on the active roster for the Mets at the end of season from A (Nori Aoki) to W (David Wright). The review will look at their season statistics, stories, and what role (if any) they will have next season. We continue our series today with a look at catcher Travis d’Arnaud.

PHILADELPHIA, PA – SEPTEMBER 29: Jose Reyes #7 of the New York Mets celebrates with Travis d’Arnaud #18 after hitting a solo home run in the top of the first inning against the Philadelphia Phillies at Citizens Bank Park on September 29, 2017 in Philadelphia, Pennsylvania. (Photo by Mitchell Leff/Getty Images)

Story: After a rough 2016, the Mets spent a lot of energy this spring trying to fix Travis d’Arnaud. The Mets imported third base coach Glenn Sherlock, a noted catching instructor, from the Arizona Diamondbacks specifically to help restore d’Arnaud’s confidence. The initial returns were disappointing as d’Arnaud failed to hit much at the start of the season and didn’t improve much at throwing out runners. To make matters worse, d’Arnaud injured his hand and landed on the disabled list in early May. The injury knocked d’Arnaud out of action for three weeks, and he still struggled a bit upon his return.

d’Arnaud was positively average for a couple of months, and the Mets began siphoning away some of his playing time as a result. Rene Rivera was the beneficiary initially, and after he went to the Chicago Cubs on waivers Kevin Plawecki started splitting time with d’Arnaud. That appeared to motivate d’Arnaud, who had his best month of the season in September, batting .297 with six homers and 19 RBI’s in just 64 at bats.

d’Arnaud established career highs in home runs and RBI’s, but it sure didn’t feel like he had a breakout season. The Mets have to hope that d’Arnaud’s September showing carries over to next season.

Mets’ General Manager Sandy Alderson expressed confidence in the catching tandem of d’Arnaud and Plawecki, who could grade out to be a league average catcher over the course of a full season. With both players cost effective and limited options available for an upgrade, the Mets will likely stick with d’Arnaud and Plawecki for another year.