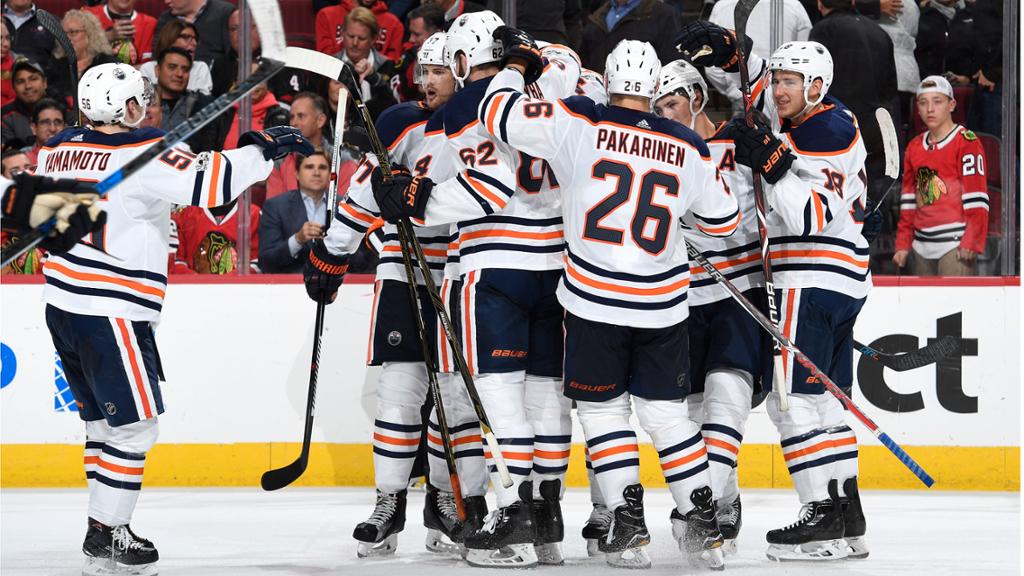 The Edmonton Oilers finally snapped the streak tonight. They went into the danger zone, weathered the storm, and will walk out of the windy city with two points. This was a gutsy win for the Oilers, mainly because things went south early and the team could have folded and moved onto Philly. Instead, they battled back and took down the Hawks.

After four really poor games, the Oilers came out tonight and committed to defense, playing a smart game all night long. The team didn’t commit any stupid turnovers, and Cam Talbot made the saves he needed to in this game. The penalty kill finally stepped up, while the Oilers’ top-six collectively played their best game of the year.

It wasn’t always pretty tonight, the Hawks dominated stretches and came close to winning it on multiple occasions, but the Oilers battled hard and got a huge victory to open this very tough road trip.

Cam Talbot really struggled early tonight, taking a poor penalty and then opening the scoring when he knocked a Patrick Kane shot into the back of the net. Luckily for the Oil, Talbot bounced right back and didn’t allow another goal past him on the evening. Talbot was stellar and made some key saves in tough positions to keep his team in it.

Later in the period, Connor McDavid made a move that, quite frankly, I can’t accurately describe. He set up Patrick Maroon, who tapped in his first goal of the season with ease to tie the contest. You can view McDavid’s magic right here.

There were some awesome scoring chances the rest of the way, including a Kailer Yamamoto partial breakaway, but there would be no more regulation time scoring.

In overtime, McDavid would draw a penalty in the final two minutes, giving the Oilers a four-on-three opportunity. Finally, the Oil would set up Mark Letestu as he blasted his first goal of the season past Anton Forsberg to give Edmonton the 2-1 victory.

Cam Talbot looked like his old self again tonight. He made key saves all night long and kept the Oilers in it at points. This is the kind of goaltending we have come to expect from Talbot, it’s nice to see him play that way again. It would be huge for the Oilers if he’s turned the corner again.

Brad Malone really impressed me on the fourth line tonight. He plays a physical style and works his backside off every single shift. To be honest, in two games he has looked better than Jujhar Khaira has at any point this season. I think Malone is closing in on a full-time role with the club.

Adam Larsson and Oscar Klefbom finally looked like themselves tonight, while Darnell Nurse continued what has been a really strong start to his season. Kailer Yamamoto, Patrick Maroon, Milan Lucic, Ryan Nugent-Hopkins and Ryan Strome all stuck out in a positive way tonight too.

Big ups to the Edmonton penalty kill as well tonight. The group has been horrible this season, but looked good here and made some big kills when the game could have gotten away from the Oil.

I really like Yohann Auvitu’s game in the offensive zone, but he is a total adventure in his own end and without the puck. I like him plenty as a depth option, but I’m in favor of bringing Matt Benning back into the fold on Saturday afternoon.

I thought Zack Kassian had a mediocre game tonight, but what bothered me the most was his hit on Ryan Hartman. That’s one of those dirty plays that can hurt a guy and can put your team in a bad position. Kassian has to get away from those penalties and get back to his normal self again.

Nothing stood out to me tonight as ugly, which is a really good thing. The Kane goal was really sloppy on Talbot’s part, but he more than made up for it the rest of the night.

That was a much needed victory from the Oilers tonight, no way around that. They played the kind of game you expect from them and got back to basics after wandering in the desert for the last two weeks. Hopefully this is a sign that the team has figured it out.

I’m interested to see what Todd McLellan does with his lineup on Saturday. With Leon Draisaitl back in, I think there is a chance to get three legit lines going. Keep Yamamoto with McDavid and Maroon and keep the RNH line together. That would give Leon a softer minutes role and could ease him back in.

I suspect we see both Leon and Benning back against the Flyers, which is another huge game. This team has to start to string a few wins together here to get that good feeling back.

Regardless, after an unfavorable start, the Oilers rode the storm out and got two points. At this point, that’s all that matters. We’re onto Philadelphia baby.