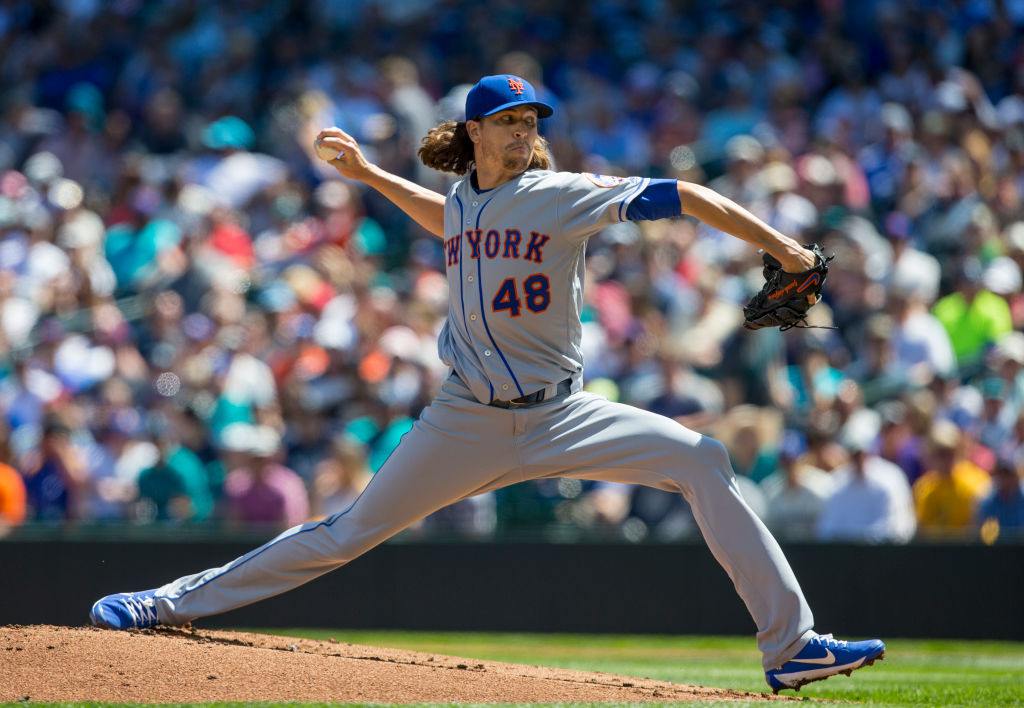 Now that the 2017 season is over for the New York Mets, we have been looking back at the year that was. After taking a more general view of the offense, pitching, and coaching staff, it’s time to take a look back at the Mets’ players. This series will take a look at every player on the active roster for the Mets at the end of season from A (Nori Aoki) to W (David Wright). The review will look at their season statistics, stories, and what role (if any) they will have next season. We continue our series today with a look at starting pitcher Jacob deGrom.

SEATTLE, WA – JULY 29: Starter Jacob deGrom #48 of the New York Mets delivers a pitch during the first inning of an interleague game against the Seattle Mariners at Safeco Field on July 29, 2017 in Seattle, Washington. (Photo by Stephen Brashear/Getty Images) *** Local Caption *** Jacob deGrom

Story: Jacob deGrom entered 2017 as the Mets’ number two starter, but an injury to Noah Syndergaard quickly elevated him to the role of ace. Things were a bit bumpy for deGrom early, as he was inconsistent early and a pair of rough starts at the beginning of June left deGrom with a 4-3 record and a 4.75 ERA. deGrom righted the ship in his very next start, tossing a complete game to defeat the Chicago Cubs on June 12th. That brilliant performance started a stretch of eight consecutive wins for deGrom, which was an outstanding run considering the subpar team playing behind him. deGrom’s hot pitching came too late to earn him a bid to the All Star Game, but he was able to build on that success during an equally strong second half. The Mets were able to count on deGrom for the whole season, as he was the only starter to remain in the rotation from start to finish without injury issues. deGrom ended up setting career highs in innings pitched (201.1), wins (15), and strikeouts (239) while establishing himself as the Mets’ most reliable starter.

In a year of shaky pitching performances for the Mets, deGrom became the one guy they could count on to get the job done. deGrom’s performance was elite and he stayed healthy, which was no small feat for any pitcher on the Mets’ staff this season.

deGrom became the Mets’ top pitcher in 2017, and despite rumors of interest from teams like the Houston Astros there is no chance the Mets move him. The Mets need deGrom to be the leader of their staff for years to come, and he should be poised to cash in with a nice raise over the $4.05 million he earned this season. The best course of action for both sides would to come to a long term agreement this winter, giving the Mets cost certainty for the next few years and giving deGrom financial security for five years or so.

Check back tomorrow as our Player Review Series continues with a look at infielder Phillip Evans!