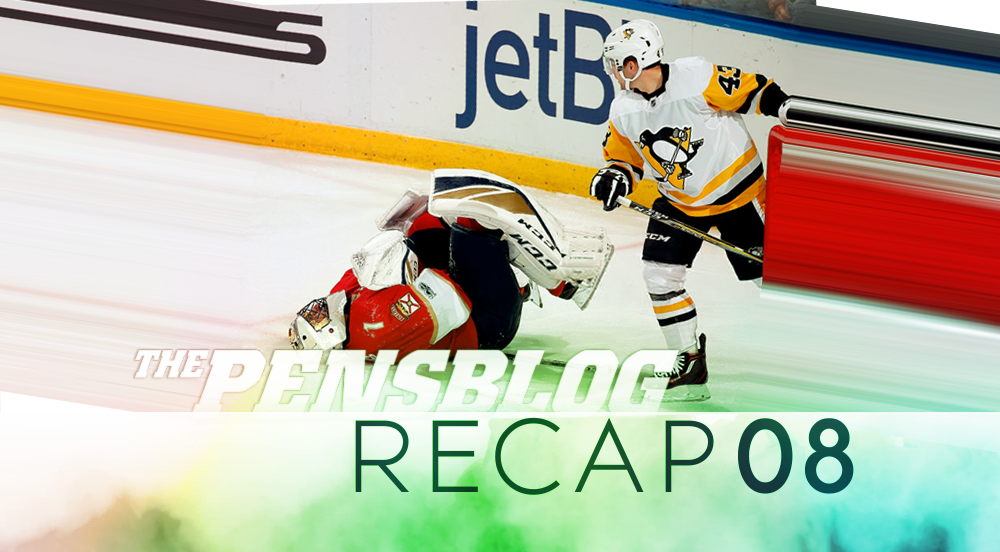 We’re only 8 games into the season, so let’s try to not get caught up too much in talking in absolutes.

The title pun fucking rules.  That’s an absolute.  Get over it.

Anyway.  The current state of the Penguins has a handful of shortcomings.  Namely in team defense.  They’ve found themselves too often chasing the puck or just wholly out of position a lot of times.  But for all of those goals they’ve given up, of which there have been plenty, there is one thing that is absolutely certain about this team:

For the first 10 minutes or so, the Penguins looked like a team that stayed up way too late the night before trying to create their own viral food meme on Meme Generator.  They spotted the Panthers an early 2 goal lead, which you may have heard is more dangerous than jai alai.

Unfortunately for the Panthers, any lead is dangerous when you’re facing a powerplay with the killing instinct and prowess the likes of which we haven’t seen since John Wayne Gacy.

No lineup changes from Tuesday night in New York.  Spoilers: Crosby would get McKegg’s wingers in the first.

Just seven seconds into this one, Vrbata took an errant Cole stick in the chops to put the Panthers on an early PP.  Murray was brilliant in killing it, but about 2 minutes after McGinn was robbed by Murray on the peep, he was the one that ended up opening the scoring on a rare mistake from Murr.  Money botched the redirected Vrbata zone entry, putting it right on the streaking McGinn’s twig for the easy finish.

Then just 94 seconds later the Panthers top line euthanized the Pens in their own end, whipping the puck more than an Amsterdam mistress.  But it was the point passing from Ekblad and Yandle that was the Pens undoing as no one acknowledged Barkov pulling out to the dot, opening up to hammer the one-timer short-side on Murr.

Then, on the very next shift and just 30 seconds after Malkin’s tally, the polarizing 4th line brought the Pens level.  Rowney got rubbed out initially, but some great puck support and a hit by the Kuhn put a target on Weener’s back for Reaves to chase him down and run him the fuck over.  Kuhnhackl was there once more to latch onto the turnover and hit RownDog on the back stick to tie it up.

About halfway through the period, Pittsburgh would head back to the powerplay because Phil got his hand literally slashed off of his body.  No better scene in hockey than when Phil gets slashed.  He always reacts as if he got stung by a bee and looks like he’s going to punch the bee in the face for being a bee.  Early on in the man-advantage, Luongo looked like he was going to drag the Panthers through it, namely committing larceny against Malkin.  But they kept coming and holding the puck in and zipping the puck around and doing all of those sexy things they should be doing up a man.  Panthers did nothing wrong, but just got picked apart by Letang, Phil, Malkin, and finished by Sid.

Following the goal to put the Pens up 1, the Panthers started turning it back on throughout the rest of the middle frame and into the 3rd.  But then Derek MacKenzie put them back up a man by hooking McKegg just 2:56 into the period.  This is notable because it was A) the only penalty the Panthers would kill and B) would result in Luongo’s night ending with about 10 seconds left on the penalty when he stuck his blocker out at Sheary, caught him, and had his armed/hand pulled and crushed against the post.  No penalty on the play because that shit’s on Lu.

But with 10:41 remaining, the Pens got themselves picked again with the Cats working the puck down low to up high, jamming them all up with quick point passes.  McKenzie Weener made a nice little play with some slick edge work to open up a lane and blast a shot passed Murr to even the score.

The Pens lost the 2v2 puck battle along the boards.  But the overload on the strong side of the ice firmly planted all 5 Pens players on that half of the zone.  Guentzel was quick enough on Pysyk to keep him from getting a clean look at the net, but Hornqvist posting up in the shooting lane as well caused him to be late getting over to Weegar and instead having to lay out to block the shot instead of keep him in place.

The equalizer opened up unlimited up and down, which is the least surprising thing from these two teams.  With Rust-Malkin-Kessel hammering the Panthers, Malkin drew a tripping penalty on Vrbata with 4:24 left to give the Pens their 4th and final PP of the night.  Tie game late and HCMS still kept 4 forwards out there with the first unit because chaos rules.  As a result, we had some heroic penalty killing by the Cats to block everything they had to to keep that unit from scoring, but after a huge clearance, Jultz retrieved the puck and deferred to Maatta.  Sheary was screaming up the wing from deep and all Maatta had to do was feed the child for Sheary to just absolutely fucking torched the entire Panthers team to streak in and beat Reimer on the backhand.  Sheary was bad all game, then does something like that to totally redeem himself.  What a goal.

Notably, though, was what the Panthers did in the neutral zone to open up Sheary up.  The seam was there and v large.

Maatta had all the space in the world to pick his pass as the entire Panthers gravitated towards him, leaving Sheary all alone.  Why?  Because the Panthers once more employed the Dick Defense.  These guys fucking suck.

Florida pulled Reimer for the extra skater with 1:48 to play, but they weren’t beating a hand-standing Matthew Murray.

Pens are back at it in Tampa tonight to wrap up this road trip.  Go Pens.