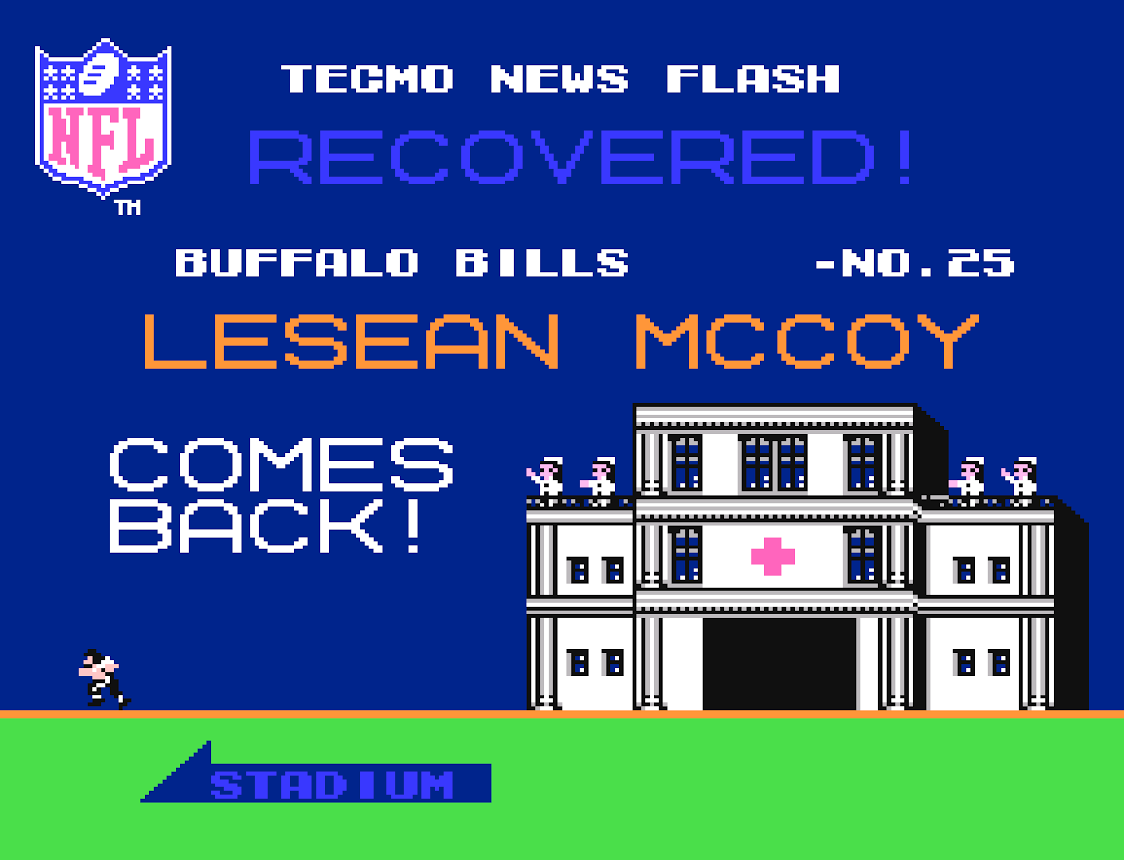 We’re back from bye week – and the Bills and Bucs are up. Here’s the staff’s predictions for the game!

Here I am putting my faith in the Bills again, even after a truly blessed week plus of not really thinking about them. LeSean McCoy should be able to get it going against the Bucs defense, Jameis will squint his way to a couple of interceptions, and the Bills will take this one at home.

I don’t think the Bills are “for real,” but then again, every team in the AFC seems somewhat crappy, so it seems like the Bills will be in the hunt till the very end. Might as well enjoy it.

Mike McKenzie (@mack10zie) 2-3.  I give up picking games for this team.  I have no idea what to expect.  Actually I do.  This team is going to have a chance to win most every game they play, but they are never going to beat anyone convincingly.  Things do line up nicely for this game as the Bills are coming off a bye, are getting a bit healthier as it appears Henderson and Mathews will be play, and the Bucs won’t have their starting QB.  Even with the roster and coaching turnover, there are enough guys here who have played Fitz multiple times.

Tampa has some nice weapons, but for the most part (minus AJ Green), the pass is not how you beat the Bills.  Tampa’s defense isn’t great, so the Bills should at least have some type of offense.  If Winston was healthy and playing, I’m not sure how I’d feel, but under these circumstances, I’m going Bills 20 Bucs 13.

I kinda wrote the Bills off after they lost to Cincinnati two weeks ago. It’s a combination of several factors, mainly that I’ve seen this act before with this team – the hot start followed by the back-to-reality downfall. Plus I mean we all kinda felt this team didn’t have enough on the roster to be a true playoff contender. The receiving corps is filled with car crash dummy body parts, and that was before Charles Clay got hurt. The coaching staff keeps doing this weird thing where they’re keeping good players on the sidelines during games (Cordy Glenn, Marcell Dareus, John Miller). They are bound to see a regression to the mean with their turnover margin. They look like a team heading to a 7-win season.

And yet here they are getting ready to host a Tampa team that has a banged-up quarterback and can’t stop a nosebleed. They are looking directly at 4-2 with winnable games against the Raiders and Jets coming up. Uh hey, this team could easily be 6-2 in a few weeks.

And I don’t trust them at all. It’s probably all the scar tissue from years of following this franchise and Buffalo’s other franchise, which finds itself at the bottom of the standings again. They could easily lose to a one-armed Jameis Winston, or FitzMagic could come off the bench and throw three second-half touchdowns to beat them.

With Winston playing hurt it appears, I think the Bills win. It’s just that I don’t trust this offense to score against anyone. It’s only been two games, but I’ll probably continue to pick the Bills to win their homes games until proven otherwise (or they play New England).

Also, I have to say it’s a shame that Buffalo will be losing Kimberly Martin to the Washington Post after this week. Obviously, good for her, but it’s a big loss for Buffalo sports journalism as she brings a unique perspective as an African American woman in a white-male-dominated field. She’s a damn good writer, as her piece on Tyrod Taylor this past weekend proved. I wish her the best but wish she was staying here to give us something different from the mayonnaise pouring out of the sports department at One News Plaza.

I’m starting to think that this game will be my breaking point with this team. I’ve been quite mad at Dennison and Beane with what they’ve done to the offense. I mean, rex took trash for trying to fix what wasn’t broken and that’s exactly what Dennison did with the running game (helped by Beane by getting rid of the receivers).

If, after a bye week, Dennison is not humble enough (which he has, since he’s changed stuff as the season went on) to re visit what he’s done and fix / adapt the offense to the player’s strengths, I’m done with him. This is a MUST win game if we want to be in the race. The offense has to do MUCH better.

Luckily, I think the Defense will continue to be good and even better if Gaines and Humber come back. I really want them to win and I think this is a winnable game.

Hey! I’m 1-4, so that’s really fun. It’s also very fun and enjoyable to try and figure out which Bills team we’re going to see on a given week. With a week to prepare I can’t help but think the Bills are in a better spot to pick up another key win. Who exactly will produce on offense is still anyone’s guess and even with Jordan Matthews returning to practice, I find it hard to imagine a scenario where this offense carries the team to a win.

However, I don’t feel any more confident about Tampa’s offense, especially if Fitzmagic is under center. Give me the Bills 21-12.

This is only the 2nd time the Bucs have ever visited Buffalo which makes zero sense. The Bucs have a very talented offense, but we aren’t sure if Winston is going to play or not.

Defensively, they may be the least formidable the Bills have played since opening day. I think the bye week pays off and the running game finally gets back on track. Bills win, 23-20.

So, I forgot to play my game two weeks ago, so here’s the end result, it was a nailbiter, I had a 2-3 score lead until the 4th quarter, and held on in the end

The Bills would blow out the Bucs

The Bills are on top of the AFC East, despite their bad run defense,

Also, Jay Cutler with 4th in pass rating is LOL

As for the real Bills, oh I dunno, Bills 35, Bucs 21, I don’t really care about the real Bills, I’m just writing these because of the Tecmo Bowl updates. The Sabres are bad and fire Russ Brandon immediately.