Kristaps Porzingis shut down late as Knicks lose to Detroit 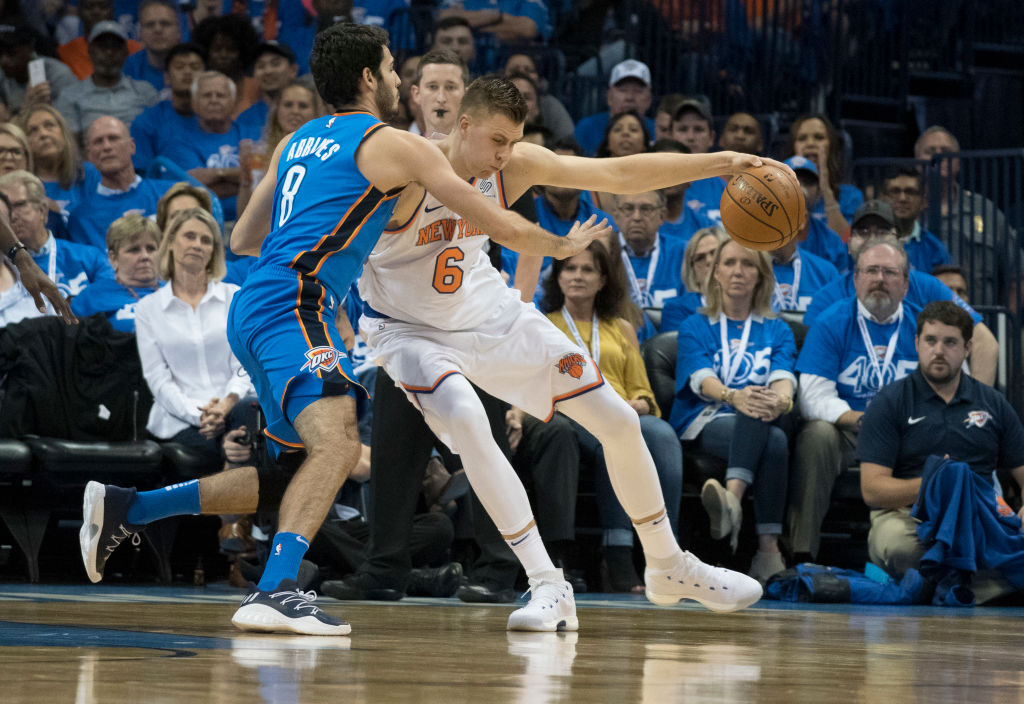 Kristaps Porzingis shut down late as Knicks lose to Detroit

For the second straight game, Kristaps Porzingis looked like a man amongst boys, clearly more than comfortable with rising up as the Knicks’ headlining attraction. Flirting with his career-high in points yet again, Porzingis exploded for 33 points on Saturday against Detroit. Appearing capable of carrying New York on his shoulders, the big man scored 23 in the first half alone as his team advanced to a thirteen point lead.

Everything looked to be in line for the Knicks to secure their first October win (the team has lost five preseason and one regular season games), but in came Anthony Tolliver.

Stan Van Gundy and the Pistons made the perfect (yet still very underrated, nonetheless) adjustment in allowing Tolliver to start the second half. Appearing in his first contest of the young season, the nine-year roleplaying veteran was an absolute bloodhound on Porzingis. Tolliver was very physical, providing a rather menacing inside presence on Porzingis that undeniably disrupted the budding star’s rhythm. As someone who prides himself on doing all the dirty work, Tolliver had perfect placement and positioning inside throughout the second half. He knew exactly where to be and how to pester Porzingis as much as possible without getting called for foul after foul. The 22 year old was visibly frustrated.

With Porzingis proving to be ineffective, the Knicks struggled to regain their offensive flow. In the meantime, Tolliver and the Pistons came charging in. The veteran forward knocked down two three-point field goals to propel his team to what eventually became a 28-16 third quarter victory. This was quite a swing, one that New York couldn’t come back from. The momentum was gone and while the two teams were neck and neck with the game on the line, the Knicks failed to get late fourth quarter stops. Long Island native Tobias Harris (31 points) proved to be too physical for Courtney Lee and Tim Hardaway Jr. and much too evasive for Kristaps Porzingis to cover as he scored from inside and outside.

On the positive side, Porzingis did receive some of the offensive help he’s going to need as he paces this Knicks squad. Enes Kanter was absolutely excellent down low, scoring from underneath and being especially active on the offensive glass. He finished with 17 points and 10 rebounds, despite playing just 24 minutes. It’s clear that playing Porzingis and Kanter together for long stretches is going to leave the team vulnerable on the defensive end. Kyle O’Quinn, Ramon Sessions, and Hardaway Jr. also scored in double figures. Still, such scoring prowess only came in bunches. Hardaway Jr. started the game shooting 1 of 12 and 0 for 6 from downtown before sinking a few late buckets and padding his line in the box score.

In this 111-107 defeat, Porzingis received his first official taste of what it means to have teams make the necessary adjustments to shut him down. It’ll be up to him to rise up and stand resilient more often than not, but he’s also bound to struggle from time to time. It’s Jeff Hornacek’s job to fine tune his lineups, find the proper balance between offense and defense, and provide Porzingis with the support he needs so that when things aren’t going his way, New York doesn’t drown like a sinking ship.