It was a second round of eliminations for the Monster Energy Series as they were at Kansas for 400 miles of racing.

The race started off with Martin Truex Jr. leading lap after lap and build a 4 second lead over the full field. At lap 30 we got the competition caution and the leaders pitted under the caution with Martin keeping the race lead. At the restart Martin Truex Jr. was below the white line before the start/finish line which caused him to get a penalty.  This put Kyle Busch in the race lead.  At lap 47 Brett Moffitt smoking enough to bring out the caution. The race continued with Kyle Busch leading laps and at lap 65 Kyle Larson was on pit road with an engine problem.  He was sent back out on the track and at lap 77 he was smoking badly and it brought out the caution and easily helped Kyle Busch win stage 1.  At the end of the day Kyle Larson wound up eliminated.

The second stage started off with Kyle Busch leading more laps.  At lap 92 it was Martin Truex Jr. coming down pit road to replace a bad tire.  The lon g green flag run continued and at lap 129 we started to see green flag pit stops.  Brad Keselowski got to lead a bunch of laps during this time period and then Kyle Busch was back in the race lead after he pitted. With 4 laps left to go in the stage Brett Moffitt brings out a new caution.  This was a quickie yellow and some cars up front pit.  This left Denny Hamlin the race lead as the race restarted with one lap left in the second stage.  The race restarted with Kevin Harvick on fresh tire moving up through the field big time as Jimmie Johnson on old tire was losing spots in a hurry.  Denny was able to stay in front and take the stage 2 win as Kevin Harvick got up to second.  Cars that did not pit do and both Denny Hamlin and Brad Keselowski got a speeding penalty on pit road.

The third stage started off with Kevin Harvick in the race lead for a short green flag run that ended at lap 172 as Ricky Stenhouse Jr. smacked the wall.  The race continued with Kevin Harvick leading more laps and at lap 188 it was caution time once more as Jimmie Johnson takes a ride through the grass.  As the race restarts it was back to caution time quickly as Jimmie spins out once more.  At lap 198 the race restarts  and we get a major wreck this time where Erik Jones hits the wall hard and almost goes over. Matt Kenseth, Jamie McMurray, Aric Almirola, and others get damage from this wreck.  This brought out the red flag.  Matt Kenseth did get some service on pit road and had one member too many on pit road which picked up a penalty that ended his race.

Jamie McMurray stated that it looked that Erik Jones over corrected.

When the race finally continued Martin Truex Jr. got hot and took the race lead at lap 211.  With 34 laps left Kyle Busch pits and it was not long and A.J. Allmendinger goes though the grass to bring out the next caution.  We got the final restart of the race and Martin Truex Jr. was back to leading lap after lap to win yet another race this season.

“I can’t believe how this day went,” said Martin Truex Jr.  The win is his sixth this season for Martin on the 1.5 tracks which is a new NASCAR record.

“I thought we had a great racecar today,” said Kyle Busch. “Just proud of my guys.” 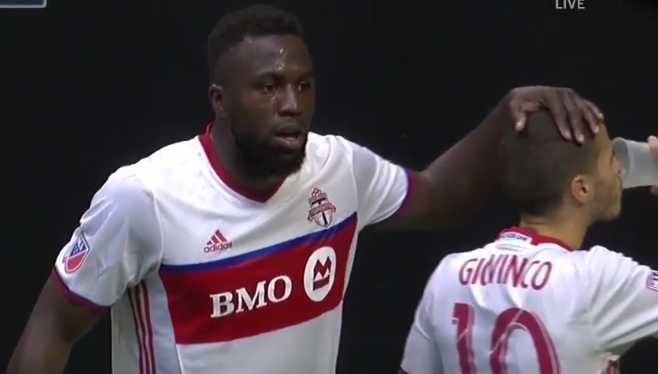 Jozy Altidore gets beer thrown at him, Sebastian Giovinco drinks out of cup

Toronto FC essentially had nothing to play for in Sunday’s match against Atlanta United, as they had already locked up a Supporters’ Shield win. But...