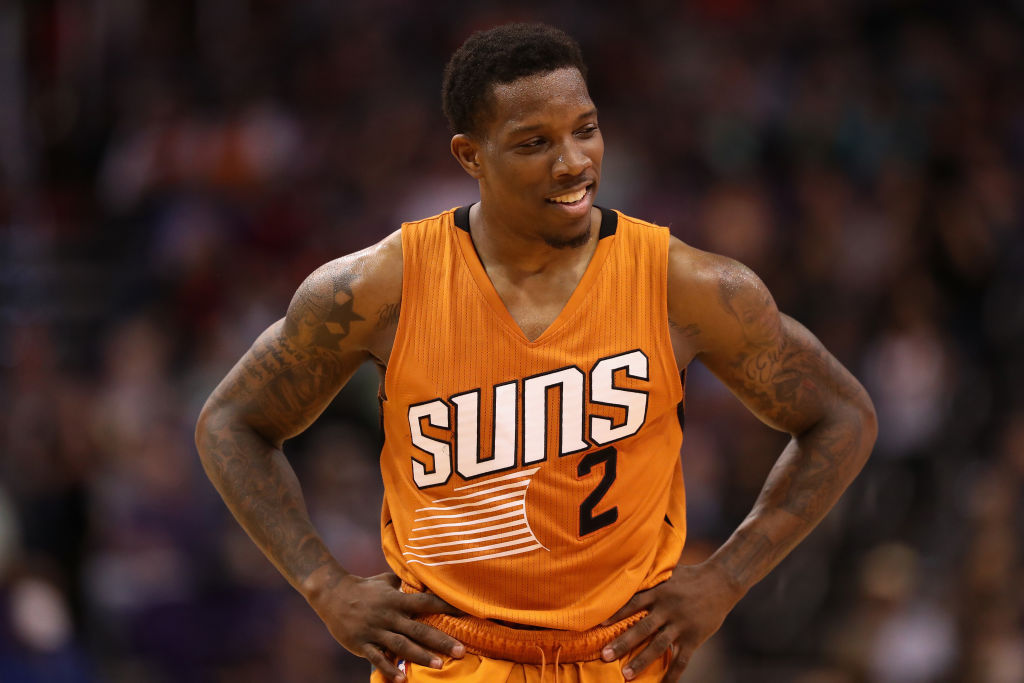 Based on the Suns slow start, in a couple weeks I was planning to pen a piece on potential Eric Bledsoe trades. But then yesterday, Bledsoe tweeted, so here are five optimistic (or not!) deals I came up with for Phoenix.

The quality of return varies due to the unknown level of interest from the other 29 teams. Few thought the Cavaliers could extract such an enticing package when they moved star point guard Kyrie Irving. Could that be a good sign for the Suns?

Well, it’s tough to say. Bledsoe is arguably still in the prime of his career. He turns 28 in December, but he has notably suffered more than his fair share of injuries. Irving is several years younger and came with less red flags in the health department (plus a title to his name). Nevertheless, sometimes a bidding war surfaces when a high-risk high-reward player like Bledsoe is available.

The team that acquires Bledsoe will almost certainly be in win-now mode, and at this stage Eric is a clear upgrade over Derrick Rose and Dwyane Wade. Bledsoe can eventually start alongside Isaiah Thomas in the backcourt, and would occupy the starting point guard spot alongside Wade until Thomas returns. Is Bledsoe worth Brooklyn’s pick? Well, that depends. The Nets are off to a 2-1 start, albeit against weak competition. Nevertheless, that pick could be closer to 10th than fifth. Only time will tell, and perhaps the Cavaliers would rather make another last-ditch attempt to convince LeBron he should stay in Cleveland.

The Pistons are 2-1 heading into Monday’s matchup with Philly, and there’s still some hope that Jackson and Andre Drummond can recapture what made them a special pick-and-roll tandem two seasons ago. However, these two lead guards might be better off switching places. Drummond would benefit from the additional spacing provided by Bledsoe’s superior outside shooting, while Devin Booker and Phoenix need all the help they can get on defense. This probably won’t happen, but it really should.

Signing a star who turns 33 in February (Paul Millsap) signaled Denver’s readiness to run. Even though the Nuggets could change course thanks to a team option (of $30.5 million!) for 2019-20, Millsap moves the timetable up in the Mile High City. Paul has the skills to play at an elite level for another couple seasons, but beyond that it’s tougher to predict. Throwing in a first-rounder should be enough to satisfy the Suns even if they don’t value Mudiay much. Faried has seen his stock fall as far as anyone over the last half decade, but he would give great effort and leadership (and he’ll be a free agent following 2018-19).

The Pelicans narrowly held onto their first win last night against the Lakers, but Bledsoe would be a welcome addition in the Big Easy. It might be illegal to stack this many Kentucky Wildcats on the same squad, but I’m not adhering to those rules. Furthermore, the Pelicans have essentially traded all of their first-round picks in recent memory, so this is not that farfetched.

Utah is 2-1, with wins over Denver and OKC. Still, the starting frontcourt of Rudy Gobert and Favors has a negative net rating of Minus-3.4 through 75 minutes. Moreover, Rodney Hood can’t seem to stay healthy. This might seem silly months from now if the Jazz steamroll their way to home-court advantage in the first round of the playoffs. But Bledsoe could add a new dimension to an offense that might stall out when things matter most. Will Utah stick with its twin tower duo, or make a move for Bledsoe?