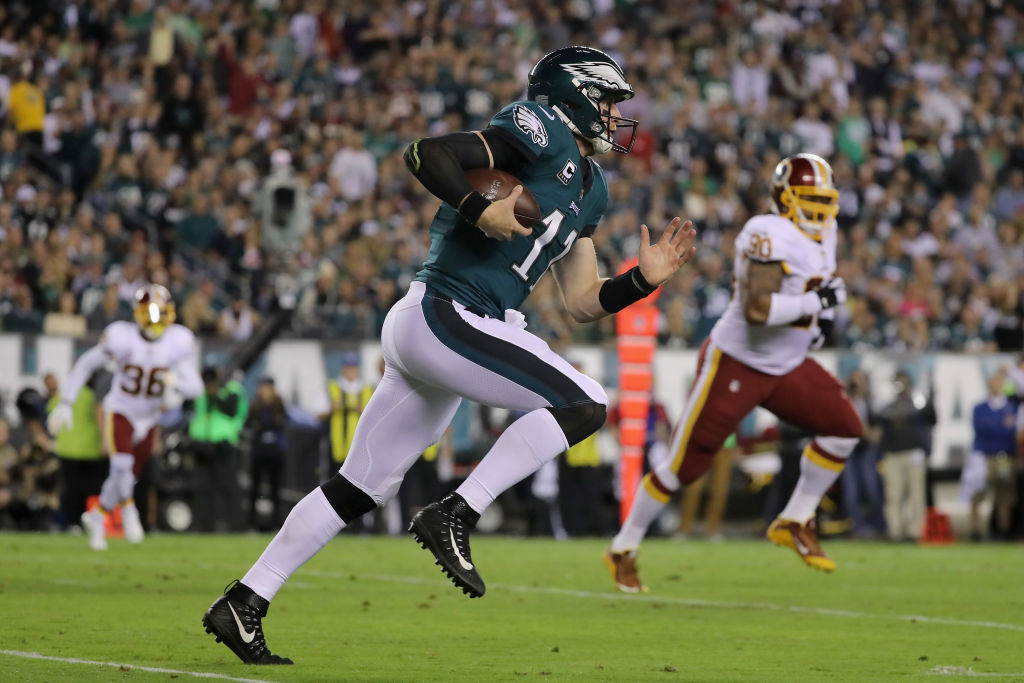 The Philadelphia Eagles were the league’s top team coming into tonight’s match-up and they made sure to keep the momentum rolling as they flew past the Washington Redskins by the final score of 34-24.

After some solid ball movement during their first possession, the Redskins jumped out to an early 3-0 lead with a 27-yard field goal by Nick Rose.

The Eagles first possession seemed to feature more yellow flags than actual plays with penalties against Lane Johnson, Alshon Jeffrey, Zach Ertz, and the entire offense for 12 men in the huddle. Just when the possession seemingly could not get worse. Carson Wentz heaved up a deep pass that would be picked off by Quinton Dunbar.

The penalties continued to fly for both teams, including one instance where the Eagles took advantage of two straight face-mask penalties committed by Washington. The fouls put the Eagles in field goal range where Jake Elliott hit a 50-yard field goal to tie the game.

Although the Eagles defense had Washington’s number through the rest of the opening quarter, they let their foot off the gas in the second, allowing Kirk Cousins and the offense to move down the field and eventually take the lead with a seven-yard touchdown pass from Cousins to running back Chris Thompson.

Later in the second half, Wentz and the Eagles offense found a spark, putting together a seven-play drive that was capped off by a 64-yard touchdown pass from Wentz to rookie receiver Mack Hollins.

On their very next drive, Wentz hit Ertz with a beauty of a 46-yard pass. Following that, a pass interference call on Dunbar put the ball on the one yard-line. Ertz would eventually seal the deal with a four-yard touchdown reception.

The momentum continued into the second half when the Eagles put together an 81-yard drive, taking over five minutes off the clock. The drive ended when a pressured Wentz quickly got rid of the ball which ended up in the hands of Corey Clement for a touchdown.

Just before the end of the third quarter, the Redskins pulled back within seven when the Eagles defense allowed Cousins move the ball through the air, and convert on huge third downs. They ended their drive with a five-yard touchdown pass from Cousins to tight end Jordan Reed.

The Eagles next drive showed every bit of why Wentz is the man in Philly as he showed off his elusiveness to extend plays for the Eagles. The drive was capped off with a 10-yard touchdown pass from Wentz to Nelson Agholor.

The defense kept up their end of the game as well when the next Redskins possession saw Cousins get hit by Brandon Graham which led to an interception by Corey Graham. The Eagles took advantage with a 42-yard field goal by Elliott.

Although Cousins and Reed hooked up for another late touchdown, the Eagles rode the clock to their NFL-best sixth win on the year.

Next Sunday, the Eagles will continue their home stretch as they host the San Francisco 49ers. Kickoff is scheduled for 1 p.m.