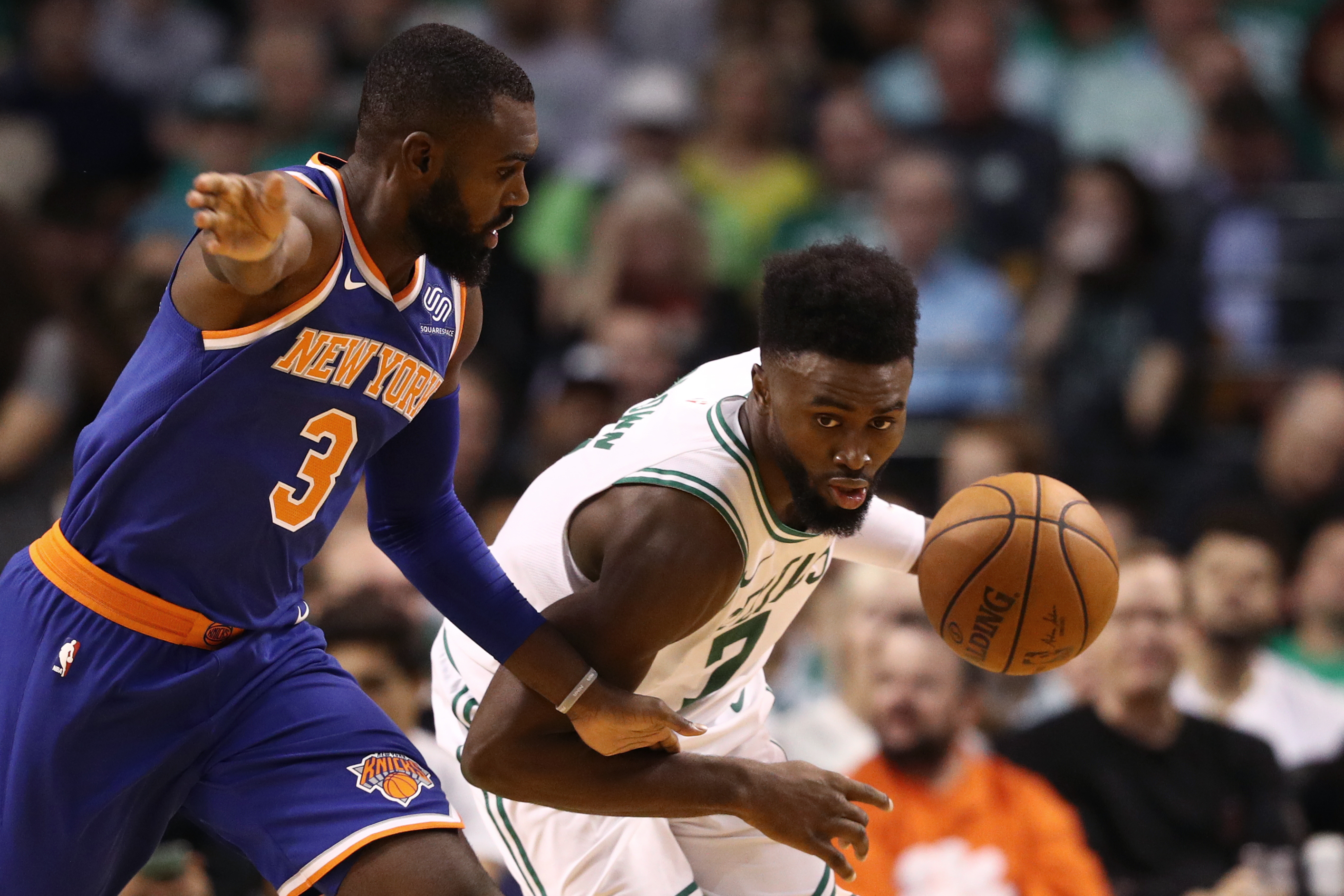 A duo that has clicked since Game 1, Celtics forwards Jaylen Brown and rookie phenom Jayson Tatum combined for 45 points in a Tuesday showcase, as the Celtics improve to 2-2 by drubbing the Knicks 110-89.

Headlined by “The Unicorn” (aka Kristaps Porzingis’s alias nickname), the Celtics shut down the 7’3 Latvian center to 12 points and shooting 3/14 on field goals. From the start of the game, the rhythm for the Knicks was slightly off with the virtual elimination of Porzingis, thanks to tough defense by all around big man Al Horford of Boston. One Knicks player which was a bright spot was former Jazz and Thunder offensive weapon Enes Kanter. With the defense locked on Porzingis, rebounds and points floated in Kanter’s direction and took full advantage of the offensive struggles. Finishing with 16 points, Kanter was the top scorer for the 0-3 Knicks, but the impressive statistic was grabbing 19 rebounds, six more than the next highest player ( Horford 13). Playing 30 or so minutes, Kanter was the one guy the C’s could not wipe out entirely. Constantly around the basket while getting help from guard Ramon Sessions, who finished with 8 points and 7 assists, the 25 year old center went 7/11 on field goals and helped everyone around him as well.

Allowing only 89 points, a lot of positive feedback from the Celtics victory at home. The dynamic duo of young players, the C’s were led by former Duke sensation Jayson Tatum and Jaylen Brown, the athletic freak. Tatum, who has not reached a major climax in scoring points, finally got his break with an explosion of 22 points, going 4/6 on threes and 9/15 from the field. Alongside Tatum was Jaylen Brown, who turns 21 today and made the most of his birthday. The leading scorer of the entire game, Brown dropped 23 points on 9/16 from the field and made his mark on the defensive side of the ball. Consistently forcing turnovers from the Knicks, Brown converting that into points, exemplified in a steal at the top of the key from Courtney Lee during the first quarter and made a showboating dunk which was quite impressive simply because Jaylen’s head was almost leveled with the rim. Tatum got a part of the action as well, making a fast start in the first quarter off a Aron Baynes missed shot, flying out of nowhere, securing the ball and throwing it home to fire up TD Garden.

Other impressive feats from Boston was the all around effort of big man Al Horford. Five assists away from a triple double, Horford ripped 13 rebounds while contributing 13 points over the course of a 29 minute performance. Being the source of passing and smart decisions, Horford is a big guide for decision making while improving the guys around him, helping Tatum and Brown each be a big part of tonight’s victory. One guy who Coach Stevens see plentiful of minutes was reserve point guard Shane Larkin. Although his stats weren’t exciting with 6 points, Larkin saw 20 minutes of action while making off the ball plays which helped the team’s efficiency on each offensive possession he was near. The former University of Miami guard came over this offseason is going to see a considerable amount of minutes as the season continues with the depth and plays he has contributed early on.