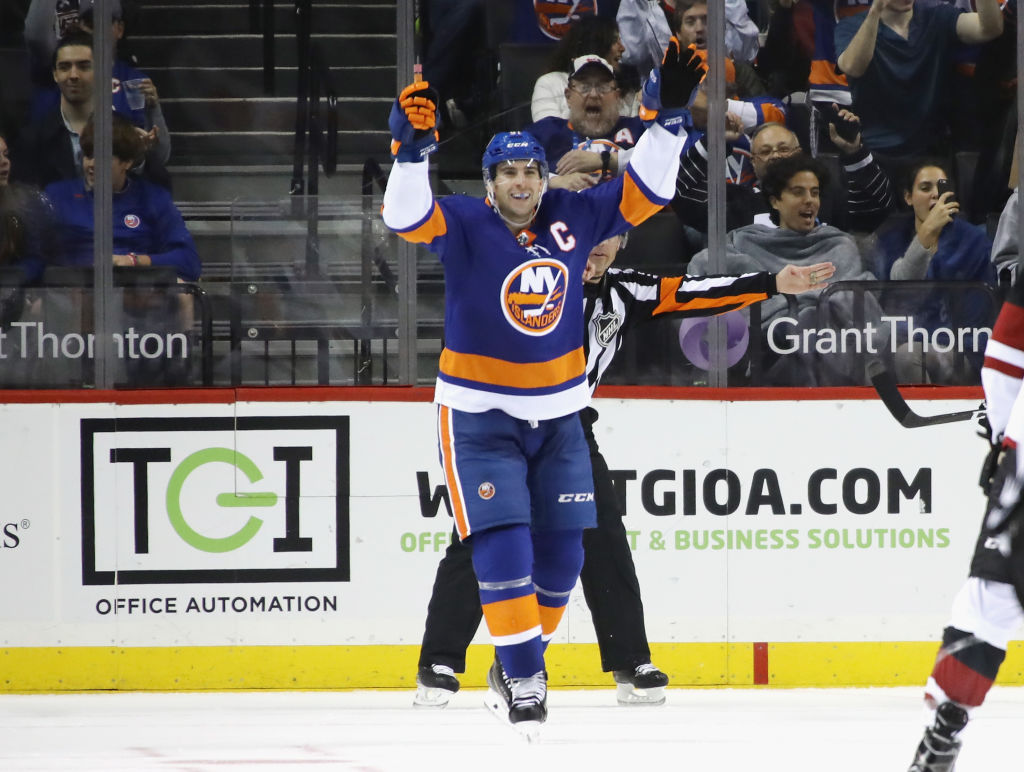 NEW YORK — John Tavares took the Islanders and put them on his back on Tuesday night, leading them to a 5-3 win over the Arizona Coyotes. The Islanders captain recorded a hat trick and an assist, while Brock Nelson and Scott Mayfield also scored in the win.

The Islanders’ captain’s first goal of the night on a redirection from in front of the net to tie the game at one in the second period. Jordan Eberle threw a shot on net and Tavares, who was coming across the front of the net, stuck his stick out to deflect the puck in.

Tavares added his second goal of the night later on in the second period, which also came on a redirect in front of the net. This time a shot from Pelech hit off an Arizona player and then was knocked in by Tavares’ skate and stick.  The goal put the Islanders in front, 2-1.

The Coyotes answered back early in the third period with a goal from Mario Kempe to tie the game back up at two. Nelson scored a power play goal at 4:21 to give the Islanders a 3-2 lead, but Nick Cousins in the middle of the third to once again even the score.

READ: Tuesday Performance Just Another Day at the Office for John Tavares

Tavares completed the hat trick at 12:41 to put the Islanders back in front for good and Scott Mayfield solidified the win with a goal at 17:03.

1. It was only a matter of time before Tavares returned to form this season. The Islanders’ captain had gone five games without a single point before having a three-point night against San Jose over the weekend. Tavares has stepped up when the Islanders have needed him to in the past and he did so again on Tuesday. The Islanders put on a sluggish performance against a Coyotes team that has not won a game this season.

It was the effort the Islanders needed out of their captain and star player, especially when the rest of team isn’t coming through in the moment.

“He led us tonight,”  Islanders head coach Doug Weight said. “I’m not all that pleased with the game, so we need his leadership tonight… It was great to see him score and he was awesome tonight.”

2. I mentioned in a previous story that Tavares has been prone in previous years to stretches where he struggles to produce points. So, it wasn’t that overly concerning to see Tavares go through the stretch that he did for five games, and with that being said he sure did have his chances to put one in before he snapped the streak on Saturday.

“The results are coming, which is nice,” Tavares said. “I think before that I had some really good opportunities. I was making some plays. Obviously we haven’s been great on the power play this year, which takes away from some production and some offense. Just getting rewarded and read off my linemates, off my teammates and getting rewarded from some good plays.”

3. John Tavares passed two Islanders’ legends with his four-point night. He moved passed Bob Bourne for seventh all-time for goals as an Islander (239) and surpassed John Tonelli in points (547). A reminder of just how entrenched Tavares is with the Islanders organization.

4. Doug Weight wasn’t thrilled with the game the Islanders played against the Coyotes. Arizona came into the night without a single win on the year and were the better team to start the game. The Islanders were outshot 14-6 in the first period and struggled to get quality shots past Arizona defenders and put themselves down a man several times in the opening period, including giving the Coyotes a five-on-three opportunity.

The Islanders sluggish play in the first period and the lackadaisicalness of their effort at times in the third nearly allowed the Coyotes to leave Brooklyn with a win, or at the very least a point for their efforts.

5. The Coyotes knew they let a chance slip away. As the team was coming off the ice after the game an audible expletive could be heard from the Arizona tunnel. The Coyotes are now 0-8-1.

6. Jaroslav Halak turned aside 32 shots on Tuesday and finished the night with a .91 save percentage. However, it’s safe to assume he would have liked to have had that goal he gave up to Mario Kempe back. It didn’t appear to be a hard shot by Kempe and on most nights that is one Halak would have stopped.

7. If you had pegged Scott Mayfield to be the first Islanders’ defenseman to score this season, you were likely among the few. It’s hard to say that even Mayfield himself would have guessed that to be the case, but sure enough it was Tuesday. Mayfield’s shot from the point turned into the first goal for a defenseman all year.

Mayfield had been scratched the previous night due to a minor ailment.