RECAP 10: Money Over Everything 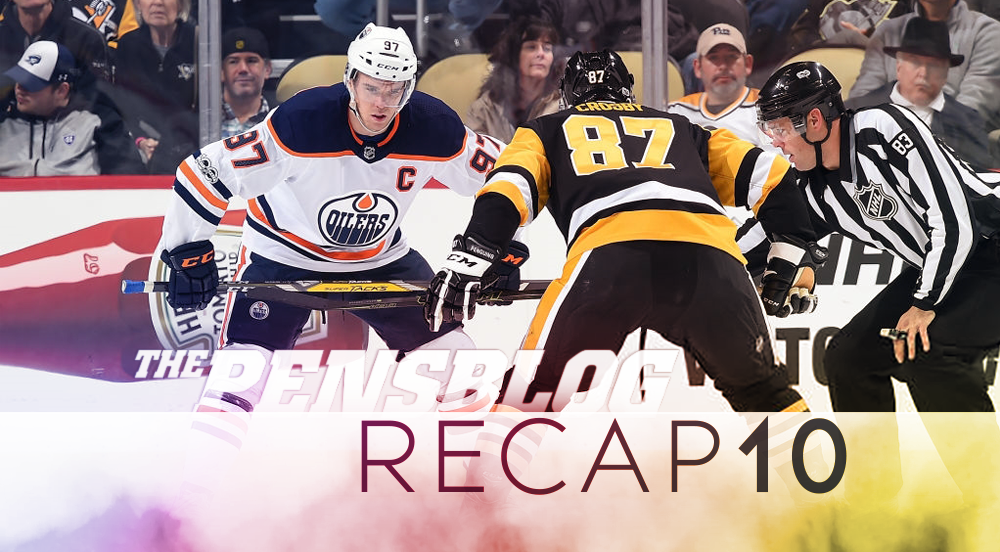 RECAP 10: Money Over Everything

As sports fans, we have this innate, incessant infatuation with clamoring on about who the best player on the planet is. It’s an unabridged, unabashed addiction.

In a marquee showdown between the Penguins and Oilers, regardless of your opinion or stance, the best player was on the ice.

Connor McDavid and Sidney Crosby were there too.

But last night, the best player on the ice was not a former 1st overall pick.  It was Matt Murray.

He stole the show. He was the story. He was sensational.

This, too, coming on a date where Riley Sheahan made his Penguins debut and Antti Niemi was claimed by the Panthers as Luongo insurance after being waived straight to Hell, thus opening the door for Casey DeSmith to back-up Murr.

Certainly, there were enough taeks and chatter about Crosby, McDavid, Sheahan, and Niemi to resurrect Alan Turing and procure him build another machine to decipher all of it.  Surely, he’d have preferred chemical castration over sifting through all of that.  Who wouldn’t? But with last night’s clinic, the only code we’d need to crack is “how in the holy hell is Matt Murray the greatest human being on Earth.”

At this point, it’s worth noting that Newton’s 3rd Law of Sportsing states that for every elite performance, there is a near equal and opposite elite performance.  While Crosby and McDavid were off doing their thing, the real battle of the night was between Money and Cam Talbot.

If Murr were Hulk Hogan, Talbot would have undoubtedly been Andre the Giant.  Batman and Joker.  Unstoppable force and immovable object.

Under literally any other circumstance, we’re probably shown a 10-goal track meet.  But Talbot was brilliant all night, particularly in being able to track the puck through traffic, deflections, and ricochets, tracking the puck to make big time saves on Rust/Phil and Malkin a little later.

Even when Crosby looked poised to break the deadlock in the 2nd, Talbot was the only Oiler up to the stopping Crosby task, squaring up and staying tall to take up every bit of the cage he needed to.

But for all of those monster saves Talbot made, Murray arguably made the bigger and better ones, including his own Save of the Year candidate.  No words do this justice.

Even with that save, all the credit in the world has to be thrown on Hags and Dumo for their remarkable desperation efforts to thwart Lucic and McDavid with the yawning 4×6 begging for puck insertion.

And, gang, with as orgasmic as that save was, it really overshadowed another incredible save Murr made on McJesus earlier in the game.

First of all, McDavid isn’t walking past some slouch d-man.  It’s not Rob Scuderi, FFS.  That’s Kris Letang that he just gets flat-footed and walks past with literally one stride.  But watch Murr.  He’s tight to his post and reads that McDavid has to go backhand there.  As other-worldly as McJesus is, even he probably isn’t elevating the puck enough from that close to find twine short-side.  He waits 97 out, pushes off, then subtly drops his shoulder/chest to attack the puck with his upper body as it’s rising to keep it from going shelf.  It’s little things like that that make him so damn good and go wholly unnoticed in real time by people betting on sports in the USA.

With the goalies doing their thing, it took over 43 minutes for the scoreless drought to be rectified.  Just 11 seconds into the period, Taylor Hall Trade Bait went to the box for elbowing Guentzel in the chops.  Oilers managed to stifle the Pens powerplay all night and killed it off, but could only hold on to the goose egg for about a minute longer.  The Pens makeshift line of Hagelin-Sheahan-Reaves outworked and outplayed the Oilers down low for Reaves to feed Cole at the point.  Sheahan and Hags went straight to the net and were accompanied by their Edmonton counterparts. With more bodies in front of Talbot than hit the floor in that Drowning Pool song, Talbot was left with no chance on the Cole wrister.  Give Sheahan his first point of the season and, therefore, his first as a Penguin.

Pens all business to try to see it out, effectively going into a defensive shell.  It was working…until it stopped.  With 2:53 remaining, the Pens broke down.  All 5 players on the ice got caught watching the puck in the neutral zone, allowing McDavid to sneak in behind Malkin and somehow latch onto a backhand at the end of his shift and in one motion, rifled it as upper 90 as upper 90 can get to send this game to OT. [Note: I broke down this goal on the Twitter machine last night.  That thread can be read here.  No need to follow, like, or RT.  I hate attention.]

Meanwhile, in “Hockey players are boring, no fun, and lack personality” Land:

Come on, kid.  You gotta acknowledge those drunk bastards.

As to be expected with 3v3 OT between two insanely skilled and fast teams, the opening 42 seconds of overtime was a better rush than you’d get from any drug.  Right off the opening draw, Letang damn near ended it on a short-side snapper.  Talbot was up to the task and it sprung his squad of McDavid and Co. on a 3v1 with Guentzel the lone boy back.  Letang eventually got into the fray as Murray read the pass to Nurse joining late.  Instead of freezing the puck following the save, he left it for Letang to throw it up ice to a lurking Crosby.  McDavid busted his ass to get back on Crosby, by 87 being 87 shrugged off McDavid with one hand and got a backhander off with the other, but the dramatic storybook finish wasn’t in the cards.

The action wasn’t stopping there- Gene and Phil jumped over the boards.  With Malkin steaking up the left wing wall, Phil smoked Lucic through the neutral zone and was all alone to collect the feed from 71 and grip and rip home the winner.

The Peng finish up this mini-home stand Thursday night as AtlantaPeg comes to town before heading out west for the Minnesota+Western Canada road swing on Saturday.  Go Pens.