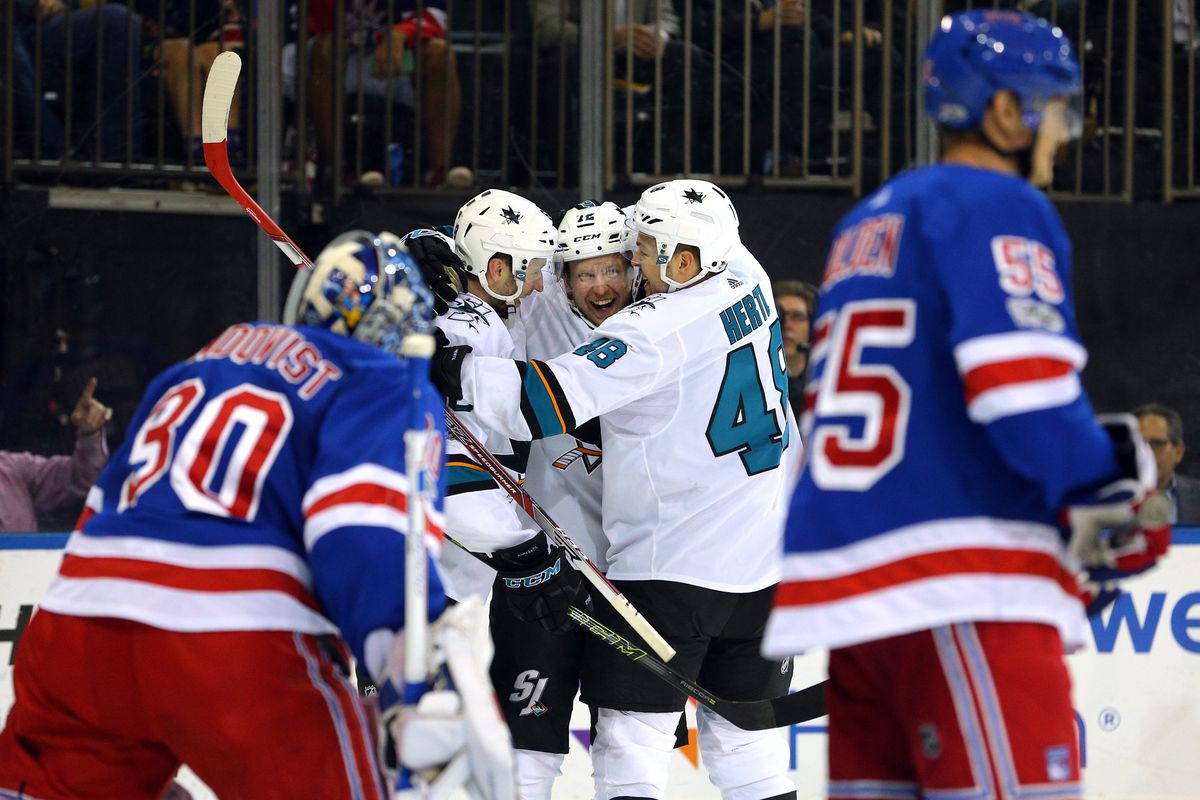 After snapping a five game losing streak on Saturday against the Predators, there was hope amongst Rangers fans that the victory would be a springboard towards something great. Instead, it ended up being nothing more than an outlier as AV and the boys were up to their old tricks Monday night when they handed the Sharks an early lead on their way to the club’s sixth loss in seven games (1-4-2).

Instead of recapping the two games, I’d rather give a state of the union a mere 10-games into the season.

1. On opening night, Filip Chytil was the second line center, Pavel Buchnevich was on the top line, Anthony DeAngelo was in the starting lineup, Kevin Shattenkirk was on the top defensive pair, JT Miller was going to fill the hole at center, Adam Cracknell was in Dallas, Boo Nieves was in Hartford, Brendan Smith was going to be Brady Skjei’s Beukeboom and Steven Kampfer was the eighth defenseman. And somehow, someway, just 10 games later Chytil & DeAngelo are in Hartford, Buchnevich is on the fourth line, Shattenkirk is on the third pair, Miller is back on the wing, Cracknell was signed and waived, Nieves has been recalled, Smith has been a healthy scratch twice and Kampfer has played in two games. Not to mention that AV has gone with a line-up of 11 forwards and 7 defensemen in 40% of those games.

Meanwhile, Oscar Lindberg is getting top line minutes for the 6-1-0 Vegas expansion team, Dan Girardi is on the top defensive pair for the 8-1-1 Lightning and Tanner Glass is getting playing time for the 5-4-0 Calgary Flames.

If it makes you feel any better, Derek Stepan, Antti Raanta, Anthony Duclair and the rest of Rangers West out in Arizona are winless so far this season. At least until Thursday they are.

2. So how did we get here? Why has it gone so wrong, so quickly? While it’s easy to point the finger at AV and his endless string of mindboggling personnel moves and deployments, our attention should be focused a little bit higher up the food chain. When Vegas selected Lindberg in the expansion draft it was a big blow to the Rangers depth at center ice. Not something that couldn’t be overcome, but a player who was expected to expand their role was now gone. So when the Rangers then made the salary cap induced decision to trade Stepan before his no-trade clause kicked in, it was painstakingly obvious that the club had a major problem up the middle.

Obvious to everyone except Jeff Gorton, apparently. While clubs around the NHL were bolstering their center ice position this offseason, the Rangers GM was signing a player who isn’t know for his defensive prowess to pivot the fourth line (in his defense David Desharnais has been a bright spot this early season) and pinning his hopes on 18-year old, 7th overall pick Lias Andersson being NHL ready.

Well, he wasn’t. And while the Rangers were initially let off the hook by the inspired play of fellow 18-year old first round pick Chytil, it was short lived as AV pulled the plug at the first sign of adversity and the club once again found themselves with a cavernous hole down the middle.

And what was the club’s contingency plan? Evidently, playing a 7th defenseman.

I caught shit from readers this summer when I predicted the Rangers were a bubble team until they were able to figure out the center ice position. But who knew that I was actually giving the team too much credit?

So what’s the answer? Probably not today’s recall of Nieves. Although, if nothing else, at least he’s better than dressing a seventh defenseman. I think.

What about a trade for Matt Duchene, who’s apparently still on the block? Or maybe Alex Galchenyuk who’s been demoted to Montreal’s fourth line? Are you ready to give up Skjei or Kreider to salvage a season that could already be over? I guess that all depends on the vision for this team. Which brings me to my next point.

3. Besides failing to fill the need at the center ice position, Gorton’s game plan this offseason was fatally flawed.

While I assume his strategy was to build on the fly, his two biggest moves were huge contradictions. He completes a build for the future trade by moving Stepan for a young asset & a 1st round pick, followed by a win now signing of Shattenkirk. Talk about mixed messages for your head coach. Is Vigneault supposed to be giving young players prominent roles to develop into while asking Shattenkirk and Lundqvist to deal with the growing pains? Or should he find a way to win at the expense of the younger players in an attempt to get his All World goaltender one more chance at the Cup?

It appears as though Vigneault is caught in the middle of developing kids and winning. Which is likely the cause of his carousel of personnel decisions up until this point.

Don’t get me wrong, AV deserves plenty of blame, but this was an unfair position for Gorton to put him in especially when the Rangers head coach is essentially, in my opinion, coaching for his life.

I’m not sure if this can get pointed in the right direction until Gorton commits to either a rebuild or to win now.

4. While the optics of not having either piece of Stepan/Raanta trade on the roster is not pretty for the Rangers, let’s remember that DeAngelo was always going to be a project, while first round picks, unless their names are Crosby, Ovechkin or Tavares, are far from guaranteed a spot on the opening night roster.

So to me, the Stepan trade really wouldn’t look so terrible if the Rangers had actually made a corresponding move to address the humongous hole it created at center.

5. Wouldn’t it be nice if some of the Rangers players actually got mad about their embarrassing play to start the season? I see a lot of sulking and self pity, but very little anger.

Sure, grabbing an early lead would be nice, but that’s easier said than done with this club. I’d love to see someone like JT Miller attempt to wake the bench up with a thunderous hit or a fight. Maybe trash talk the opponent to generate a little emotion in the game. I’ve mentioned it already this season, but this is as bland a roster as I’ve seen on Broadway in a while.

Maybe attempting to pry someone like an Antoine Roussel out of Dallas could be the kind of move that shakes the Rangers up.

6. One player who won’t be helping the Rangers, at least immediately, is Chytil, who suffered a minor injury blocking a shot for the Wolf Pack on Saturday. The injury isn’t considered serious, but it did keep the youngster from playing the next night.

7. Brendan Smith before getting married this summer…

Seriously, what happened to this guy’s toughness because the Rangers could sure use it on the blueline these days.

8. I have to assume the reasoning behind the Rangers defense being in such a state of flux this early season is due to the coaching staff not anticipating how bad Shattenkirk was in his own end. The Rangers are quickly finding out what the Capitals learned after acquiring the New Rochelle native at the trade deadline last season: he can’t be matched up against an opponent’s top line. Which is fine, except with Smith and Skjei struggling as well, AV is having a difficult time finding a partner for McDonagh, who is having issues of his own. Until AV feels comfortable that either Smith or Skjei have found their game, the best option alongside McD might be the surprisingly solid Marc Staal.

9. Even at 2-6-2, could you imagine how much worse it would be without a functioning power play. Oh wait, after watching the Rangers go 0-for-6 in the 4-1 beating to the Sharks we actually do know. I’m sure sending DeAngelo down to Hartford should help rejuvenate the power play immediately.

10. The Rangers penalty kill looks like it’s been missing something, but I just can’t put my finger on it…

11. Our worst nightmare has come true as Henrik Lundqvist can no longer bail out the Rangers porous defense night in and night out. While he’s still capable of making the highlight reel save, he’s becoming more prone to the soft goal…

It also doesn’t help that because of the Rangers slow start, AV has been forced to lean on Lundqvist as the 35-year old goaltender is currently on pace for an unsustainable 74 starts this year. But fear not Blueshirt fans, Ondrej Pavelec gets the start on Thursday.

12. In a bit of irony, Stepan, Raanta, Duclair and Clendening could potentially put the final nail in AV’s coffin with a victory against their former team on Thursday. I can’t imagine a scenario in which the Rangers lose to the winless Coyotes and AV makes it out the door as the head coach of the Blueshirts. We’re beyond the point of poor decision making with AV. As I outlined in thought #1, we’re at ludicrous levels.

There’s still 72 games remaining, so I’m far from conceding this season, but man, it’s fallen apart quickly and I’m not seeing any signs that this team is ready to turn things around anytime soon.