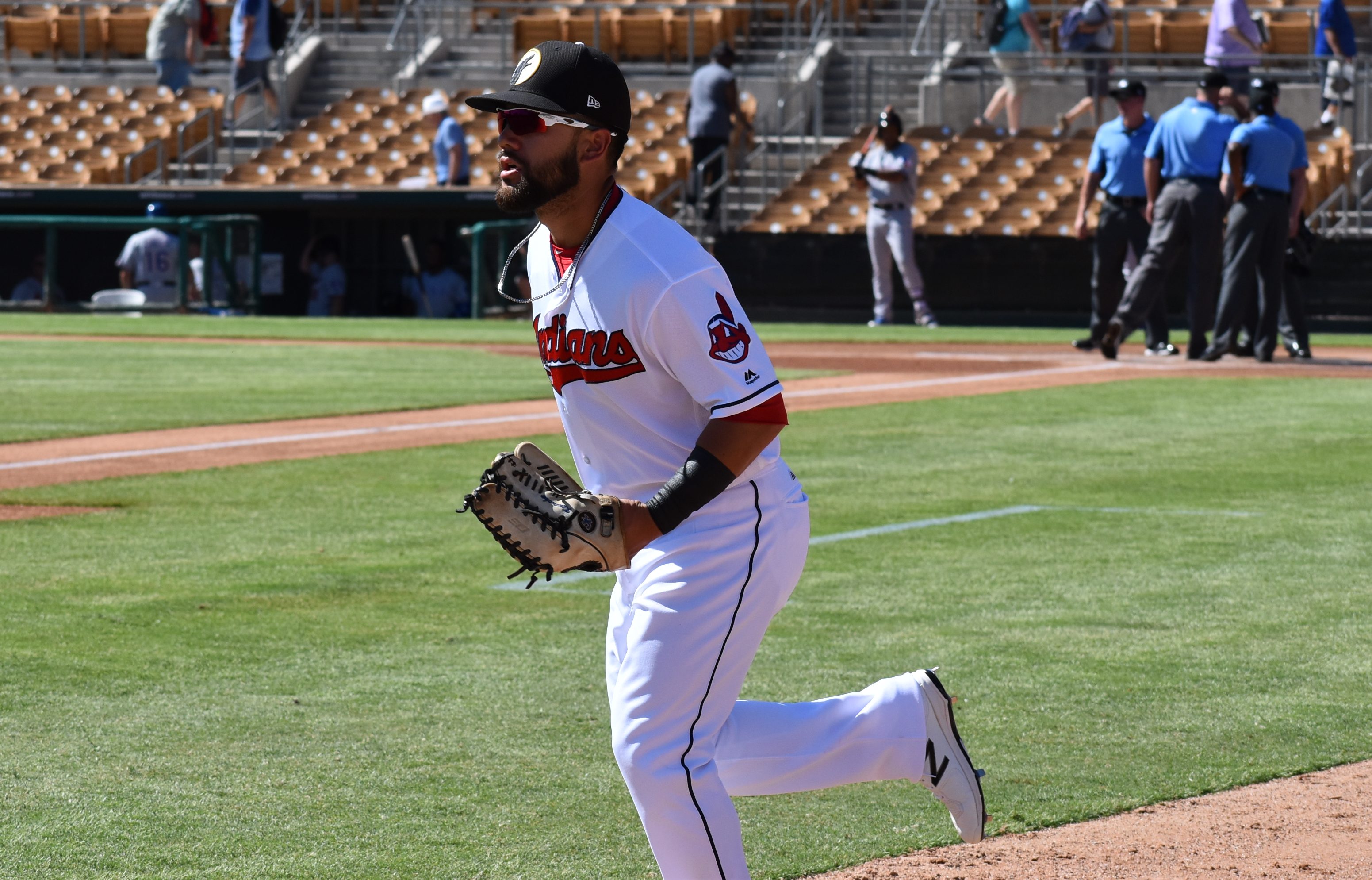 Two weeks into the Arizona Fall League season, the Indians affiliate Glendale Desert Dogs sit in the middle of the pack in the middle of the season. The team is shared with the Phillies, Pirates, Dodgers and White Sox (the last two of which play their home games at Camelback Ranch in Glendale), so the overall team effort isn’t particularly indicative of the Indians prospects performances.

Mejia stands at the plate for the Desert Dogs at Camelback Ranch in October, 2017. – Joseph Coblitz, BurningRiverBaseball

Starting with the man everyone wants to know the most about, it took a little while for Francisco Mejia to get into games at third, but he has played there three times now. Unfortunately, I have not been able to see him play third base in person yet, but he has already been credited with two errors. It is far too early to judge this transition, however, and he is certainly ahead of where Carlos Santana was when he attempted to play third to start the 2014 season.

Offensively, Mejia has been a constant reminder of why the Indians want to get him into the line-up in 2017 in any possible way. His .387/.406/.484 batting line is among the best in the AFL and he hit his first home run of the fall in one of those starts at third. In another start at third, he had four hits in five at bats against Surprise, so the early indication is that the position switch is not affecting the rest of his game.

Bradley looks up for a fly ball while playing 1B for the Glendale Desert Dogs in 2017. – Joseph Coblitz, BurningRiverBaseball

Bobby Bradley has perhaps been the complete opposite of Mejia as he has impressed defensively, but struggled greatly at the plate. He has a few hard hit balls with a home run and a triple that hit off the top of the wall in left at Camelback, but has struck out 13 times to lead the team and hasn’t walked, leading to an average and OBP of .258. This is a mixed league, so he is facing some pitchers who are older and more advanced, but it doesn’t bode well for his expected jump to AAA next year. Of course, this is an extremely small sample size of eight games.

Krieger warms up before a 2017 AFL game in Glendale, AZ. – Joseph Coblitz, BurningRiverBaseball

Despite poor overall offensive numbers, Tyler Krieger has shown good speed and solid defense. This is an incredibly long season for Krieger as he was the starting second baseman for team Israel in the World Baseball Classic. With that in mind, he played his first game that mattered this season on March 6th, then went straight into Spring Training with Akron and is now scheduled to continue through November 18th. While his numbers didn’t look great in Akron or in Glendale (he played fine in the WBC considering the level of competition), he has certainly had quite the experience in 2017. Undoubtedly, this chance to learn and grow as a player is more important than any individual minor league stats.

Ka’ai Tom has also played, although sparingly, in both left and center field. Like Krieger, his numbers don’t look good, but his is an even smaller sample size than the rest and he has worked five walks for a .389 OBP to make up for the lack of hits. He hasn’t been tested on anything extremely difficult in the outfield, but has made all the routine plays.

Sean Brady only made four starts in Lynchburg this year and he is making up for lost time in Arizona. So far he has made two starts, allowing four hits and one walk in six innings. The lefty has struck out five and is yet to allow an earned run.

Leandro Linares is also yet to allow a run, although he hasn’t quite been as lights out. He’s only struck out one batter through four innings and allowed five hits, but has been hurt by poor defense as five unearned runs have scored behind him.

Two other Indians relievers have had a much harder time with Argenis Angulo walking six in two innings and Luke Eubank allowing six hits and three runs in 4.2.