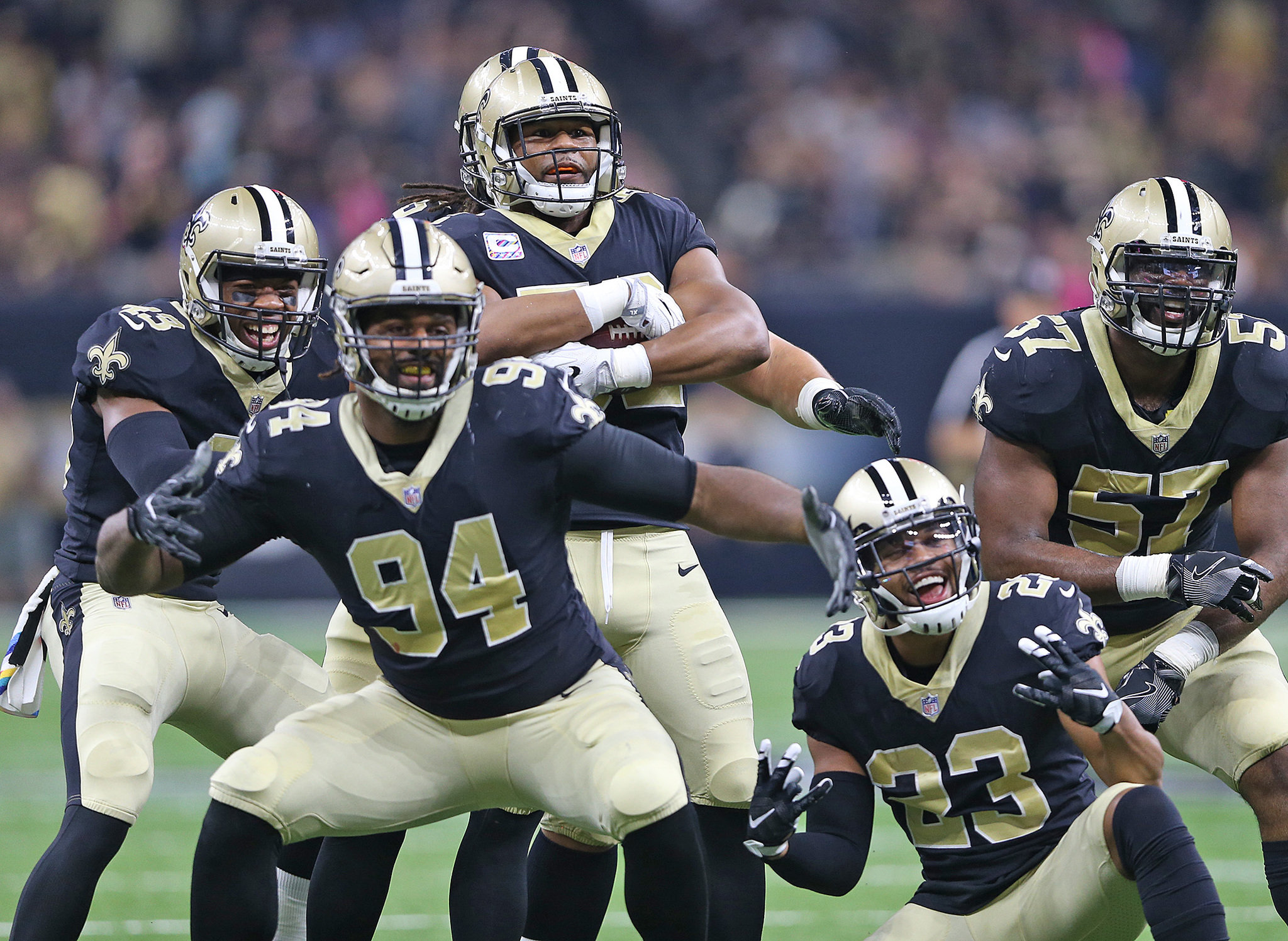 Welcome back to the second part of a two-part series looking at the Saints current four game win streak. If you missed the first part looking at the offense you can check it out HERE. In this part we will look at the defense.

This was a hard one because the defense seems to be much improved during the current win streak. There is an argument to be made that it is because of the defense that the team has been able to have a four game win streak. But I am not buying into the Saints defensive line just yet. Sure Cam Jordan has been playing out of his mind but outside of that the defensive line just hasn’t jumped out at me. Currently the Saints rank 20th in rushing defense. Running backs are gaining on average 4.9 yards per carry and are racking up an average of 114 yards per game. If this team is going to be a force they are going to have to better win the matchups in the trenches. If a team knows they can get almost 5 yards on a carry on first down it makes second down and third down a lot more manageable. The Saints need to get teams in third and long situations so that they are able to either force a three and out or at the least not sustain a drive down the field and get the ball back in Drew Brees’ hand. One positive thing about this team is the pass rush. The Saints are ranked 13th in the league in pass rush and currently have 17 sacks on the year. They are on pace to have 45 sacks this year which would be the highest number in the Sean Payton Era. Jordan and Okafor are both ranked in the top 25 of defensive linemen, 13th and 24th respectfully, but the Saints don’t have another lineman in the rankings until 100 which is Tyeler Davison. If I could see a little more consistency in the rushing defense I would be all in on the defensive line. Until then I’m just not buying it.

Side Note: How awesome would it be if we could see Fairly on this defense…….

If you are comparing this linebacker core to that of the last three years then yes by all means you should be buying into the linebackers but I am comparing them to other linebackers in the league and the Saints linebackers just don’t compare. Hands down the best linebacker on the team is AJ Klein. Klein is ranked at number 52 with 22 tackles, 1 sack and 1 forced fumble that wasn’t recovered. Craig Robertson comes in a second with 16 tackles, a sack and a forced fumble that was recovered. The linebackers are just meh. They too are directly linked to the poor rushing defense. Once a running back gets to the second level the Saints linebackers just aren’t making a whole lot of plays. The Saints linebackers aren’t bad by any stretch of the imagination they just aren’t a liability to the team so they are serviceable. It’s a shame that Anzalone was knocked out so early, he was actually showing great speed and awareness. If he can manage to stay healthy he will be a good linebacker for many years in the black and gold. This is one area the Saints MUST address in the draft and Free Agency next year if they want this defense to continue to improve.

I am all in on the Saints secondary. I am putting the Safeties and Corners all in one category because I have bought into all of them. Literally as I have bought a Lattimore jersey! Call me crazy but I am all in on the secondary. Words I never thought I would say as a Saints fan. First lets look at the corners. Now that Dennis Allen is done with the De’Vonte Harris experiment the corners have been downright dominate. Of the Saints 17 sacks only 7 are from the blitz. That means that the Saints have 10 other “coverage sacks.” Meaning the secondary has done a good job of covering receivers and making the quarterback hold on to the ball so that the pass rushers can get to him. This hasn’t happened for several years for the Saints so this is a big deal. Marshon Lattimore has been a “shut down” corner and Ken Crawley has been doing an above average job as well. Crawley, for better or for worse, is extremely physical and gets handsy at times but unlike Brandon Browner of the past he hasn’t let that physicality get flagged too often. Another way you can tell how good these corners have been is by the release of backup cornerback Sterling Moore this week. The Saints cut their best cornerback in 2016 this week and no one is really talking about it, mainly because Moore has rarely even seen the field. This is a good thing! This also is probably a sign that the coaching staff believes that Breaux will be back fully healthy and be able to contribute. But if I am being honest, I am not sure where Breaux fits in on the team. The corners are playing so well it doesn’t really make sense to mess up a good thing. Vaccaro has been playing the slot a lot thanks to the Saints three safety sets they seem to thrive in so I don’t know if you put him there either. I think the starting roles belong to Lattimore and Crawley until one proves they are no longer worthy and Breaux is able to win the job back. This goes without saying but this is the best shape the Saints have been in as far as corners are concerned in a long time. Now on to the safeties. Marcus Williams was a home run of a pick. Vonn Bell has been solid and Kenny Vaccaro has been his usual self. I like where the team is going and I would urge anyone reading this to chill on the Vaccaro trade rumors. I don’t think there was much merit to that and I fully believe that Kenny will be back with the team next year. Bottom line, there is nothing to hate about the Saints secondary.