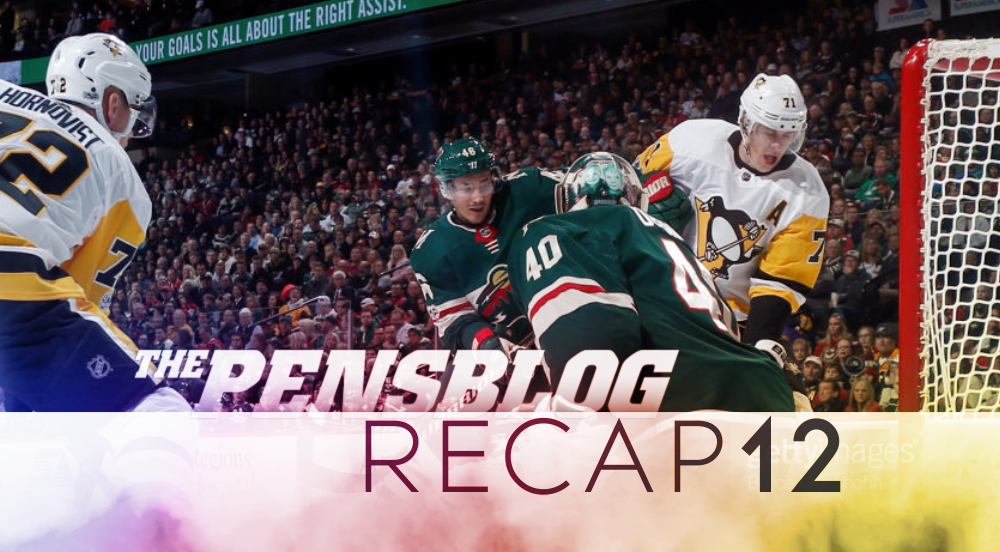 Raise your hand if you stayed in to watch the Pens game on a Saturday night in October instead of going out for Halloween or watching Game 4 of the World Series.

Before you even had a chance to sit down and think about what you were doing, Bob Errey and Steve Mears successfully mentioned that Matt Cullen used to play for the Penguins no less than 42 times. Did you know that? I didn’t! Glad we’re all up to speed on things. I bet you probably didn’t know Jake Guentzel was from Minnesota, either. Nice to know! Apparently Minnesotans are so nice that they invite opposing hockey teams over to their house for dinner and knee hockey on nights before games. So gracious!

Around the same time Mears and Errey stopping dry heaving about all things Minnesota, shit started happening on the ice. Not even seven minutes into the game, Eric Staal (who’s apparently still relevant) went to the box for tripping and the Penguins were granted their first power play of the evening. It sorta looked something like this:

After recording only one shot on goal on their first PP courtesy of Zach Trotman (*Verne Lundquist voice*: Who the hell is Zach Trotman?), the Wild got called for another penalty a few minutes later. This time, the Penguins capitalized on the man-advantage courtesy of this seeing-eye one-timer off the stick of Evgeni Malkin.

Less than two minutes later, former-Penguin, Matt Cullen, set up former-Capital, Daniel Lose-ik (get it!), with an absolutely perfect shot-pass (this would become a trend for the Wild) off the boards.

In all honesty, it was a very nice goal by Daniel Winnik, but I’m still petty af about how AWFUL Winnick was when he played for the Penguins a few years ago. It’s not really his fault Mike Johnston (#NeverForget) put him on Sid’s line during the 2015 playoffs, but it’s his fault he couldn’t produce a single point while playing alongside a guy who once made Matt Cooke look like Mark Messier.

The second period was about as exciting as hockey in October. The Penguins had one power play, and the Wild had two. Neither team scored or did anything remotely exciting. And that was the second period.

The third period was a little bit more eventful than the second. A puck actually found its way to the back of a net. Sadly, it wasn’t for the good guys.

Almost halfway into the third, Minnesota Wild defenseman Mike O’Reilly delivered a sneaky shot-pass directly to the tape of Mikko Koivu’s stick who redirected the puck in between the wickets of Matt Murray.

Valiant effort by Kuhnhackl. B- celebration (or as John Buccigross would say, “Celly!”) by Koivu.

Unfortunately, there would be no patented comeback in this one as Ian Cole decided to take an idiot penalty with 1:30 remaining with the Penguins down a goal (not smart!). However, Cole’s penalty paved the way for history to be made. For the first time ever, Phil Joseph Kessel, Jr. played on the penalty kill. Sadly, he wasn’t able to record his first-career shorthanded goal.

Notes (in no particular order):

Well, Mike Sullivan had some things to say. I've seen him more angry. But I'd expect a good effort in Winnipeg tomorrow. Wasn't happy at all