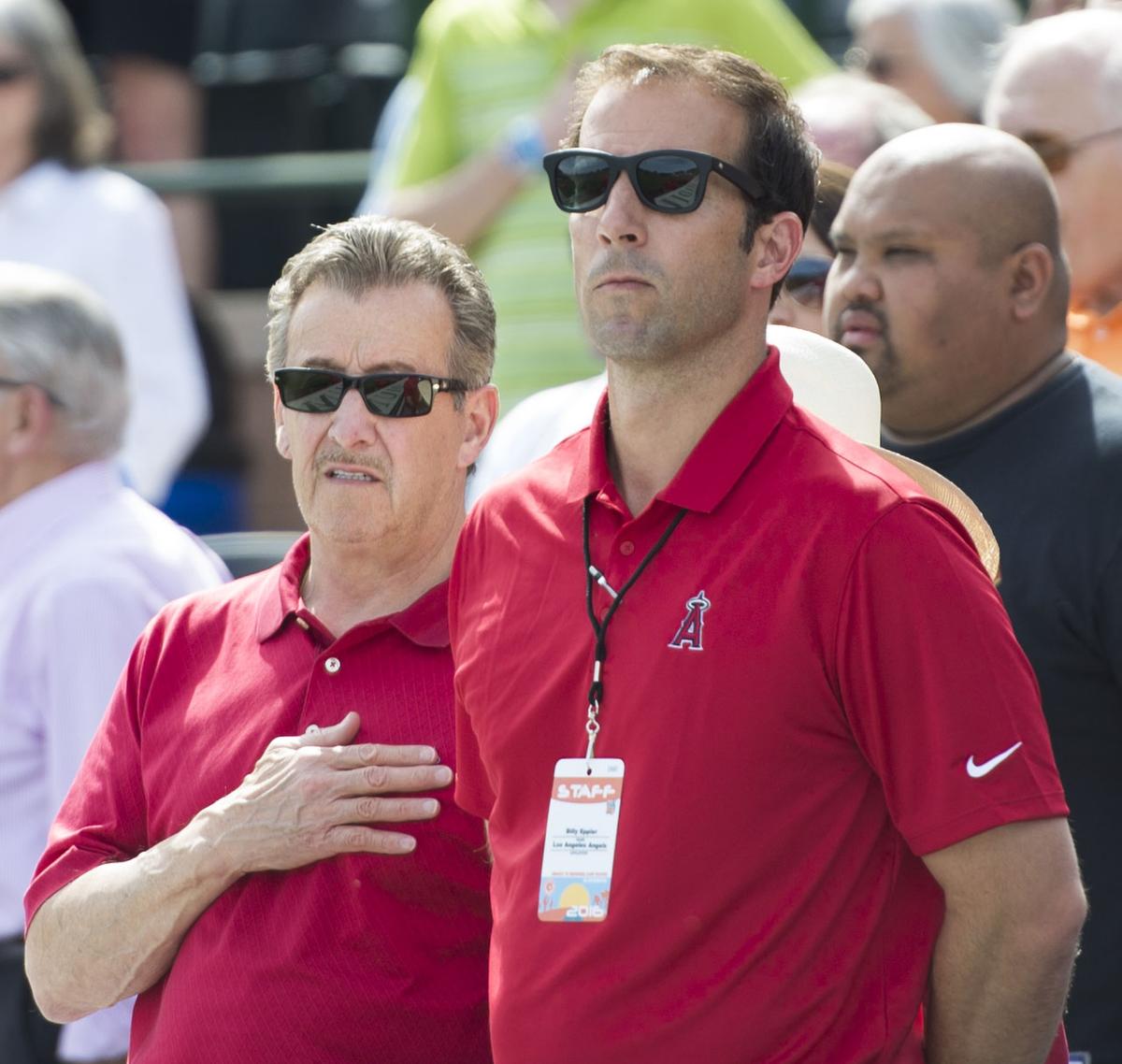 Now that we have established some of the Angels primary goals, restrictions, and needs we can take a deeper dive into the teams projected finances heading into the off-season.

As it currently stands, if Justin Upton elects to not opt-out and the Angels bring back all of their contractually controlled (including team options), pre-arbitration eligible, and arbitration eligible players and you add in team benefits and any/all payouts (option buyouts, dead contracts, etc.), projected salary (actual) and AAV will be approximately $181.5M and $165.3M, respectively, as seen below:

First of all you may notice that the ‘Payouts’ line is empty heading into the off-season.

This is, of course, due to Josh Hamilton’s contract finally falling off of the books, freeing up a lot of money that can be applied this season.

However the ‘Payouts’ line will probably change slightly once the 2017 season is over because the Angels are unlikely to exercise Huston Street’s $10M team option which will result in a $1M buy-out added to the table above (a net $9M savings). Once this very probable event occurs, it will lower actual and AAV payroll to approximately $172,504,800 and $156,323,848, respectively.

Beyond Street, Ricky Nolasco has a clause in his contract that if he exceeds 400 innings pitched, between 2016 and 2017, his 2018 option becomes a player option. The 2012-2016 version of the CBA, Section E (5) (a) (iii), states that if an option year can potentially be both a team and a player option, that option year will be considered a guaranteed year for the purposes of AAV calculation.

Simply put Ricky’s option year appears to count towards AAV whereas if it was only a club option it would not. Note that the new CBA clearly states that any year in a multi-year contract that is not a guaranteed year shall be treated as a club option year for the purposes of AAV (2017-2021 CBA, Article XXIII, Section E, (5), (a), (i)).

If the Angels elect to decline his option, total AAV will drop by an additional $12.2M. Fortunately, here, when Eppler moved Hector Santiago to the Twins he convinced Minnesota to cover Ricky’s $1M buyout so the Halos will not be on the hook for it if they do part ways with Nolasco. If this happens, the actual and AAV ledgers will decrease to $159,505,800 and $144,123,848, severally.

The projected arbitration numbers, in the table above, were obtained from MLBTradeRumors.com. They publish an annual snapshot of all arbitration controlled players, by team, and their projected salaries. Their system has proven to be reliably accurate over the years and the projected salaries for each of the Angels players, listed above, should not vary too widely, resulting in a negligible impact to this payroll discussion.

Additionally certain players, like Carlos Perez and Jefry Marte, had 2017 salaries that were slightly higher than the league minimum salary, per Baseball-Reference.com. The author has made rough estimates of 2018 increases for those particular players. These estimates, if off, should also have a negligible impact to the payroll discussion.

The league minimum player salary for 2018 is $545,700, a $10K increase over last year. This, of course, applies to most of the pre-arbitration players except for the two listed in the paragraph above. Please remember that any player not on the 25-man roster receives only Minor League pay unless their contract says otherwise. This simply means that the total payroll number, above, will be offset by about $2M-4M due to roster fluctuation throughout the 2018 season so please keep that in mind.

Basically if total player salaries, across MLB, increase significantly from one season to the next it could likely result in a percentage increase to Player Benefit Costs above the standard 6%. We may see evidence of this in 2019 if the 2018-2019 free agent class appreciably increases total player salaries.

Based on research in previous Primer series articles, from 2015 and 2016, this appears to be a significant decrease (about 35%-40%) in cost for player benefits. A firm benefits number is a bit nebulous here, due to the new CBA, so it may be slightly higher or lower but the difference is small and will only marginally impact Angels payroll each season and the results of this discussion.

Also the stadium question, posed last year, seems to have been put to rest as Arte Moreno has decided to remain in Anaheim stadium through the 2029 season per their original lease agreement. Instead they will focus on renovations over the next 13 seasons to the tune of an estimated $40 million capital outlay. Essentially Arte has punted this decision way down the line to a time and place where he may not even be the owner of the team.

In the end, though, Billy Eppler should have good to very good payroll flexibility once the current financial year closes on December 2nd, 2017. This will allow him to target virtually any player he likes whether it is in trade or through free agency to help reinforce the 2018 Halos.

As was stated over the last three years, the caveat to this financial discussion is that Arte has consistently and fully funded team payroll during his time as owner so these perceived cash-related issues and thresholds may just be guidelines and could be violated at Moreno’s whim. In fact Arte did go over the Luxury Tax threshold once back in 2004, albeit, by a measly $927,000.

One potential roadblock that could curtail spending is actual team payroll  which is about $15M-$16M higher than AAV. If Moreno does not allow Eppler to go over a specific number, say $190M (versus the CBT threshold of $197M) in actual payroll, then Billy will not be able to fully utilize all of the Luxury Tax space available. On the other hand, Arte probably could authorize and handle a measured increase but by how much is anyone’s guess due to our lack of complete team financial information and insight into Moreno’s economical approach to spending.

Remember that the team pulls in an annual sum of $150M from their cable deal plus an unknown amount from their partial control of the Fox Sports West Regional Sports Network (RSN) in addition to ticket ($104M in 2017) and merchandise sales. Also, in this past year, the team pulled in $68.1M in operating income, per Forbes, continuing a 4-year trend of rising income.

The crux is that a significant increase in payroll, even over a short 3-year period, would, in probably the worst case, make the team break-even, i.e. Arte would likely still profit, albeit in the slimmest meaning of the term, if he makes this aggressive, bold move to spend in this window. After 2020 the Angels can bring payroll back under the CBT threshold and reset their tax rate to avoid the most severe penalties under the new CBA.

In the end Moreno completely controls how far the Angels dive in, but it seems crystal clear that Eppler has set a path that will allow Arte to choose exactly how much money is spent, how many resources are expended and where they are applied, and even how long we stay in the deep-end of the pool, which gives Moreno a great deal of leeway to get involved as much or as little as he desires.

As part of last year’s Primer we discussed, briefly, the opportunity the Angels missed to exceed the CBT threshold in the 2015-2016 off-season. In hindsight that actually proved to be a blessing for the team heading into 2018 as the Angels have shed bad contracts and are better positioned to address the challenges of the new season (and beyond).

To illustrate that here is a snapshot of the guaranteed contractual money owed to Angels players in the coming seasons:

The Angels currently have six guaranteed contracts to pay in 2018 for Trout, Pujols, Upton (if he does not opt-out), Calhoun, Simmons, and Valbuena, totaling $94,494,048. If the Angels do not hand out any more guaranteed deals before Dec. 2nd, 2019 and they decline Luis’ team option, the total guaranteed money owed in that season will decrease to $86,827,381.

Finally, if Andrelton Simmons is not extended and he departs and the unthinkable happens and Mike Trout leaves, the Angels guaranteed money owed drops to $46,125,000 in 2021, the last year of Albert’s and Justin’s (current) contracts.

The good news here is that the Angels look really sound, financially, heading into this off-season. We have relatively few guaranteed commitments resulting in a reasonable impact to team payroll in terms of AAV.

However it should be noted that the Angels have a large group of qualified players heading into their 2nd year of arbitration control in 2019. This will result in a lot more money being allocated to pay their salaries so although our guaranteed commitments are decreasing, the teams arbitration numbers will rise resulting in a net, but mitigated, decrease.

This situation worsens in 2020 when a lot of these players hit their 3rd year of arbitration which will likely result in Eppler trading one or more of them away for prospects and replacing them with internal, trade, or free agent solutions to assuage payroll concerns.

Despite the arbitration rise, the freedom of those decreasing guaranteed commitments leaves enough room for the Angels to extend Mike Trout, in the next year or two, likely sometime before Opening Day 2019. Frankly there are virtually zero roadblocks in Eppler’s way to re-sign Trout other than Moreno’s willingness to spend which, honestly, has never been an issue.

In particular that potential extension seems most likely to occur after the 2018-2019 free agent market has dolled out record contracts to Bryce Harper, Clayton Kershaw, and Manny Machado. Once they have set the bar, the Angels will know what they have to do to secure Mike for the rest of his career (Hint: It is a mind-bogglingly big number which will be discussed in the Outfield section).

Mike Trout himself is fully aware that the Angels are trying to improve the team to convince him to eventually sign a career-long extension. Jeff Fletcher quoted him in an October 1st, 2017 article, saying, ““It’s going to be a crazy off-season, … We’ve got a lot of money freed up. It’s going to be interesting. I like the direction we’re going.”

The bottom-line is that the Angels are entering the 2017-2018 off-season with solid financial flexibility, a core group of competent players to compliment Mike Trout (and the ability to acquire more), and a rapidly growing farm system to increasingly draw upon as needed in the coming seasons. We may look back and point to this off-season as the turning point for a sustained run over the next several years.

Just remember, as we said above, that Arte Moreno holds all of the cards in terms of how far the Angels push, from 2018-2020, in terms of payroll. Although our actual and AAV payroll numbers posted above could be off by as much as $10M, due to imperfect financial insight and information, in the end Eppler can only go as far as the owner will let him.

Angels fans should temper their most fantastic expectations in 2018 as it is unlikely that the Angels will exceed the CBT threshold this upcoming season in favor of keeping that option open for 2019 and 2020, instead.

Billy will improve the team, for sure, but the Angels will probably stay within their means and under the 2018 CBT threshold of $197M (AAV), probably sitting at an actual payroll of absolutely no more than $195M, if that.

In the next section we will discuss Eppler’s possible off-season strategy.