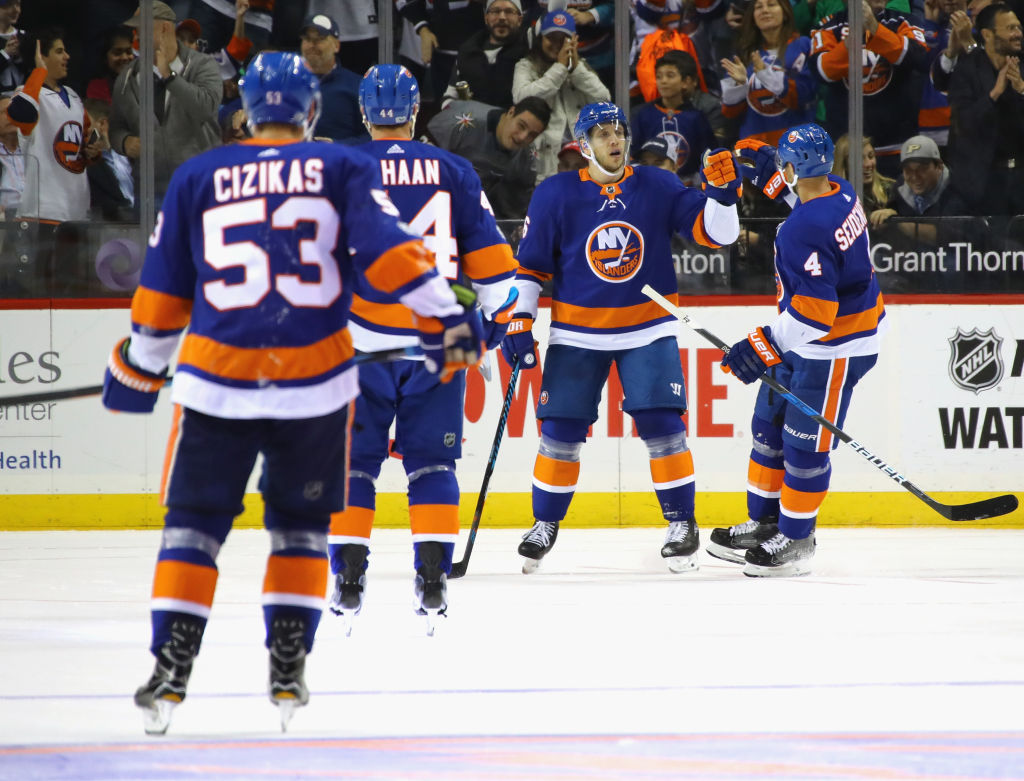 Despite falling behind in the first period nine and a half minutes in, Ladd’s third goal of the year tied the game up at one at 13:50 of the first period. The tie game was short lived with Alex Tuch scoring on the power play to put Vegas back in front, 2-1.

However, the Islanders would score the next five goals through the second and third periods, starting with a power play goal from Tavares at 14:50 of the second and then another goal on the man-advantage at 17:44 from Barzal. Clutterbuck gave New York a 4-2 lead 4:44 into the third, followed by breakaway goals from Kulemin and Tavares.

Collin Miller scored Vegas’ third goal of the night at 14:41 of the third period. The Islanders won’t play again until in Washington DC.

1. Monday night was the third time in the last four games that Tavares has scored  two or more goals against an opponent. The Islanders’ captain started off the season slow, scoring just twice through the first seven games of the season, but has since put up nine goals in his last five games, which includes two hat tricks. Tavares leads the Islanders in both goals (11) and points (15).

2. It took a few tries, but the Islanders’ power play finally got going when the team needed it the most against Vegas. Tavares was able to redirect a shot from the point by Nick Leddy to tie the game at two 41 seconds into the power play. They followed it up with some good puck movement on their next power play chance, which resulted in Barzal burying the puck into a wide open net on a rebound.

It was a big improvement from the Islanders first three power play chances earlier in the game. Resembling some of their failed attempts from earlier in the season, the Islanders failed to create much zone or enter the offensive zone smoothly, and they surrendered a shorthanded goal on their first power play of the night. It wasn’t quite clear what Nick Leddy was doing going after the puck in his own end so slow, especially with Coady Eakin right behind him, but Anthony Beauvillier didn’t help matter by not getting to William Karlsson quick enough to break up the setup pass.

3. Still the Islanders power play has been worlds better in the previous two games than it was to start the year. The Islanders are now five-for-nine on the man-advantage in their last two games, which is the most consistent that particular special teams unit has played.

4. Speaking of Mathew Barzal, the rookie had another impressive night on the ice. He picked up his third career NHL goal when put the puck into the net on the Islanders’ fifth power play of the game. It’s been becoming a bit challenging to come up with new ways to describe just how well he has played for the Islanders. His speed and skill are a real sight to see and even for the biggest Barzal fans it was hard to imagine that he’d have this much of an impact in the first month of his rookie season.

5. “I think he will surprise some guys. The league is so vast now that unless a guy has 12 or 13 points at the age of 19 or 20, they’re probably not noticing him as much. I think his numbers have been guarded a bit. Not really reflecting the way he played. He’s generated a lot.” — Doug Weight on Barzal

6. At this point in time, you can’t talk about Mathew Barzal without mentioning Josh Bailey. The two have been the Islanders a huge help for the Islanders and Bailey extended his point streak to seven games with three assists on the night. There are a lot of people who have given Bailey a hard time over the years and attributed his success last season to playing alongside Tavares, but his start to this season should squash some of that.

“Josh is a heck of a player,” Tavares said. “He doesn’t get enough credit. Not just his offensive ability, which is really flourishing, but his all around game. To win games and to be a successful team you need guys like Josh.”

7. The Islanders have closed out the month of October with wins in five of their last six games of the month.