Your Morning Dump... Where the student finally beat the master 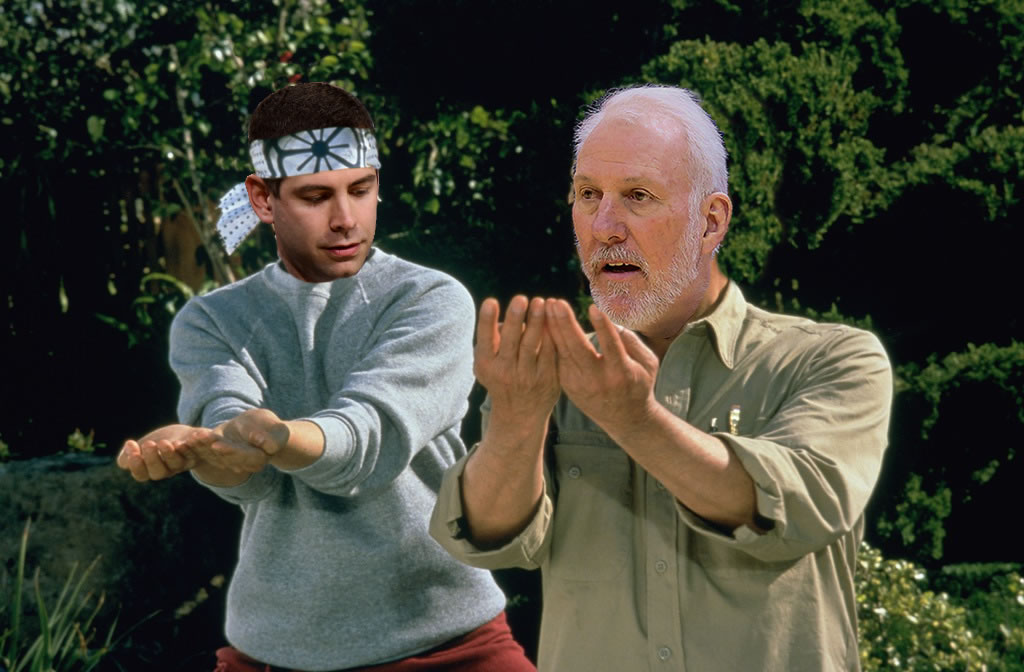 Your Morning Dump... Where the student finally beat the master

“When (the Butler Bulldogs) were on TV, I watched the game to see what I could pick up, to see what (now-Boston Celtics head coach Brad Stevens) did, because he did such a fine job,” Popovich said Wednesday before his Spurs downed Boston, 104-93.

In the aftermath of the Spurs’ 111-89 triumph at TD Garden, Popovich took some time to shower Stevens with praise. “Coaches always talk to each other, but he doesn’t need much from me,” the 65-year-old Popovich said. “He was a hell of a coach before he got here and he’ll be an even better coach as time goes on. He’s a special guy, that’s why Danny Ainge went and got him.”

He says Boston’s young coach has always been one of his favorite targets.

“I had already stolen from him plenty,” Popovich acknowledged before San Antonio’s home game against Boston on Friday. The Spurs never trailed in the game, in holding off the Celtics 101-89 after getting a late scare.

By now, it has become tradition: every time the Boston Celtics and San Antonio Spurs meet, head coaches Brad Stevens and Gregg Popovich lob praise at each other through the media.

Saturday night was no different. Before the Celtics fell to San Antonio, 108-105, both coaches discussed their mutual respect.

“Unless he’s been talking badly about me,” Popovich said. “But it’s been great. I’ve enjoyed, from Day 1 when he came into league, we talked several times and we’ve continued that. He’s a fine young mind, of great character, and one of the fine coaches in the league now already.”

Over the past four years, there have been two constants in the Pop/Stevens relationship: They say great things about each other before the game, and then the Spurs go out and beat the Celtics. Stevens came into last night’s game riding an 8 game losing streak against Pop. But the Spurs without Kawhi weren’t as good as the Celtics without Hayward. At least not last night.

Kyrie Irving’s playmaking brilliance and another strong defensive performance lifted the Celtics to a 108-94 home win — the franchise’s first victory against San Antonio since Doc Rivers was the coach, the Big Three were the stars, and the Boston bench consisted of Glen Davis, Sasha Pavlovic and Von Wafer, among others.

Irving’s one of the stars now, and he was fantastic during his best game with his new team. The guard finished with 24 points and six assists despite sitting for most of the fourth quarter.

If you’re looking for evidence of Stevens’ adaptability as a coach, look no further than the resurgent defense of this season’s team. Robbed of one of their main offensive talents five minutes into the season, the Celtics have jumped to the top of the Eastern Conference by playing exceptionally good defense. Last year’s team struggled with defense all season, but Stevens was able to adapt well enough for the Celtics to win 53 games, secure the top seed and advance to the ECF. Rather than insist on imposing last season’s template on this season’s personnel, Stevens and his staff have made the most of newfound rebounding and defensive capabilities.

Page 2: Where the Pop and Brad mutual admiration society is still in session

“He is a special person, and that’s on and off the court. He’s very intelligent, and intelligence is fine, but if it doesn’t come along with incisiveness and judgment and an emotional maturity, it doesn’t do you much good. And he’s got all those things, and that’s large. Not that many people have that, and it shows the way he handles people, the way he coaches. He’s going to be a great one before it’s all over with. I think he’s already a hell of a coach.”

It was noted that Stevens said he’d never coach long enough to approach the 1,154 wins Popovich carried into last night’s game, the latter grinned and said, “That would be smart on his part. I would advise him to do that. He’s got many more capabilities than me. This is all I can do.”

Stevens said, “He’s nice in the media to us. He’s a great role model for our profession. He’s a guy who’s a basketball coach, but he’s not defined as a basketball coach. He’s got a lot of other interests. He does a lot of good things in the community. He’s always open to helping other coaches. I can’t say enough good things about him. I think he’s at the top of the profession.”

Aron Baynes, who’s now played for both Stevens and Pop was asked to compare them before last night’s game:

Aron Baynes asked for the difference between Stevens and Pop:

“One’s older than the other.” pic.twitter.com/0gG4Qck52R

That quote pretty much says it all.

Also, Baynes needs to study up on his Celtics history.

Irving’s eyes flicked downward instantaneously. The in-and-out dribble is a move Irving has perfected, so it made sense that he anticipated it, and in perfect sequence — as Mills tried to bring the ball across his body and start his drive — Irving planted himself and stuck out a hand. He deflected the dribble, Mills fumbled it, and Irving took off the other direction. A huge dribble pushed him out ahead of Mills, and he swung the ball around in transition to avoid the defender for the layup.

So, Kyrie and Jae Crowder switched teams in a trade over this past summer (likely you already knew this). Jae looks about ready to fall out of the rotation in Cleveland, while Kyrie is actually paying attention on defense.

Guys, I don’t know a better way of illustrating the importance of coaching, even for players as skilled as Kyrie.

If this is the way Kyrie has wanted to play for years (and he says it is), then there’s a real question of what his career would’ve looked like if he continued to play for guys like Ty Lue. Would he be remembered only as a one-dimensional scorer who didn’t have an all-around game? And also, what about a guy like Jae Crowder? How good would he be if he spent his career playing for guys like Lue? How many players over the years have had their abilities squandered because, let’s be honest here, most basketball coaches aren’t very good.

The rest of the links, five game winning streak edition

NBC Sports Boston: Irving leads Celtics as they cruise to 108-94 win over Spurs | ‘A good team win’ vs. Spurs | A perfect basketball marriage | Stevens: You can tell Kyrie is getting more comfortable