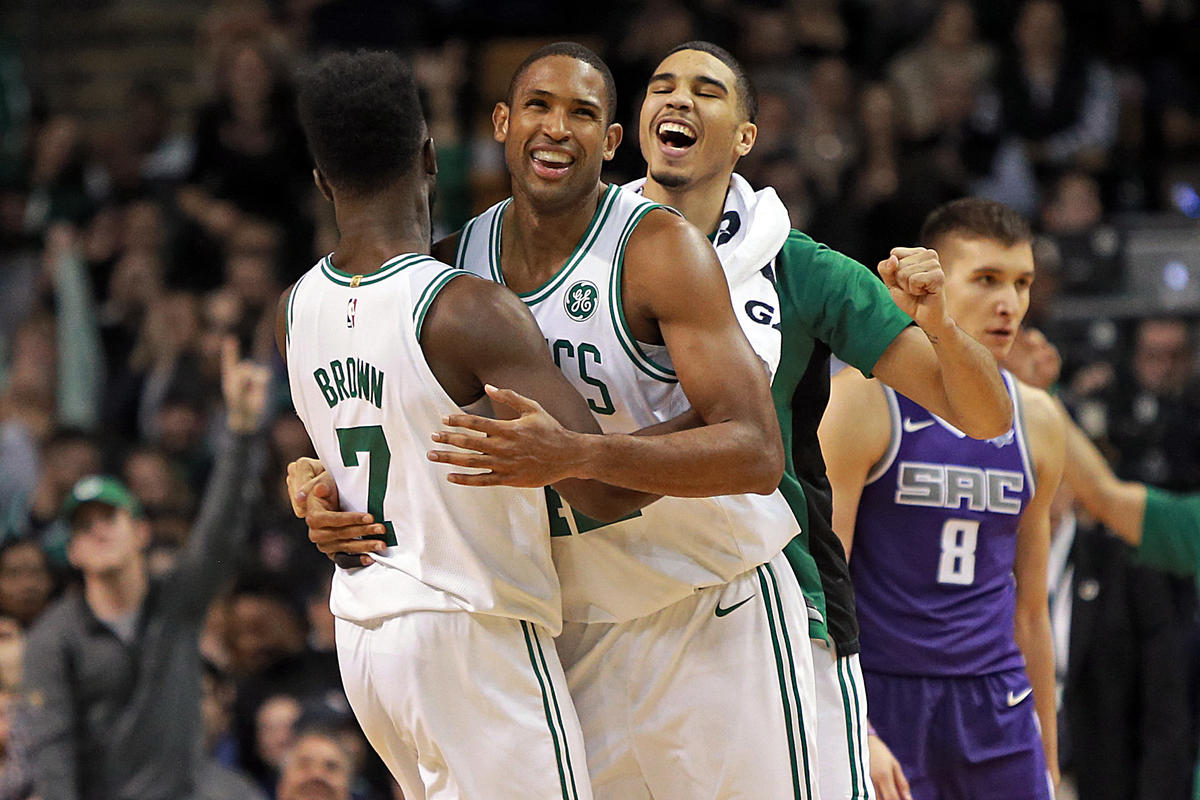 Kyrie and Jaylen led the way with 22 points each, but the Celtics received contributions from just about everybody on the active roster tonight. Now after starting the season 0-2, Boston has stretched their league leading win-streak to 6 games with a 113-86 victory over the Kings.

Kyrie set the tone for the game by using aggressive cuts to the basket and staying active in the passing lanes on defense from the jump. It began with a back door cut and a pass out of the high post from Aron Baynes, which Kyrie finished at the basket with ease. But he also soon added a nice assist to Baynes, used a perfectly-placed Horford screen to drill an open 3, and made some noise on the defensive end. Jaylen Brown must have noticed, because he responded in kind with a couple of drives to the basket and a fall away jumper plus the foul. What really got people talking was his slam over Willy Cauley-Stein (a strong defender in his own right) – and while they didn’t call a foul on this possession, its good knowing Brown still finished it with authority anyway.

Jaylen Brown wants to get in on #SunLifeDunk4Diabetes too! Don't miss this vicious dunk 👀 pic.twitter.com/4lVP3jdo3e

The first quarter really was all about Jaylen and Kyrie, as the pair scored 21 of the teams first 27 points. An ugly 6 turnovers for Boston was the only thing keeping this game close at 27-24 after the first.

Once Q2 came, the game switched gears and the C’s bench took over – Jaylen and Kyrie didn’t score a single point during the quarter. Normally that’d be a huge problem for the Celtics, but this game, against one of the worst teams in the NBA, the bench was able to pick up the slack. Daniel Theis broke out and had 6 points and 6 rebounds in just 8 short minutes of work for the half. Terry Rozier and Jayson Tatum added a couple of 3’s of their own. Most importantly, though, the Celtics bench stifled the Kings horrid offense and completely dominated them on the boards, 25-12.

Boston brought a 58-45 lead into half and only built upon it as the night waned on. Much to the delight of Brad Stevens and Celtics fans everywhere, Kyrie and Jaylen got into a competitive “anything you can do, I can do better” type of match in the 3rd quarter, as the pair went back and forth scoring points from everywhere on the court. At one point Jaylen Brown hit two straight from deep (making a new career high of 5 tonight) and gave the Celtics their largest lead of the night at 24. Not to be outdone, Kyrie answered with a steal, an assist, and a 3 of his own to give the Celtics a NEW high lead. Brad had seen enough and pulled Kyrie before the end of Q3 while the team was up 86-56. He played just 27 minutes tonight. Zach Randolph, the Kings leading scorer with 16pts, played just 23.

The bench came in and secured the lead for the rest of the game. Semi Ojeyele’s confidence continued to grow as he drilled a few more shots from deep and kept his feet shuffling on defense. He joined Daniel Theis, and Terry Rozier, as Celtics bench players that reached double digits tonight when he finished with 11.

Gino-Time once again reigned at the Garden, and the Celtics officially won another against the lowly Kings. Final Score: 113-86

The Hot (And Not)

Hot: The Celtics defense when they hold their opponents under a 100. That’s now 43(!) straight games where they’ll walk away with a W due to their stingy D.

Not: The team is on a 6 game winning streak and everybody save for Marcus Smart and Shane Larkin scored tonight – this team is pretty much all hot right now. (In Marcus’ defense, he still had 8 assists and was a whopping +20 while on the floor tonight, and in Shane’s defense he only played 8 minutes…. see?! I got nothin’ for “Not”)

What the Hell Just Happened?!

Listen, Daniel Theis had a double-double (10 pts. and 10 boards) and threw down an alley-oop from Marcus Smart in which he almost looks athletic. The Kings are definitely wondering what the hell happened there.

The dunks keep piling up! Smart lobs it up for Theis who throws down the #SunLifeDunk4Diabetes! RT to raise $1 👍 pic.twitter.com/C6678qKhHh

And ANOTHER #SunLifeDunk4Diabetes! This time Irving gets the steal, brings it down the court and lobs it up for Al Horford! RT to raise $1! pic.twitter.com/1jwVpwe7Pp