"In The Hunt" For Dummies by @2itb_buffalo 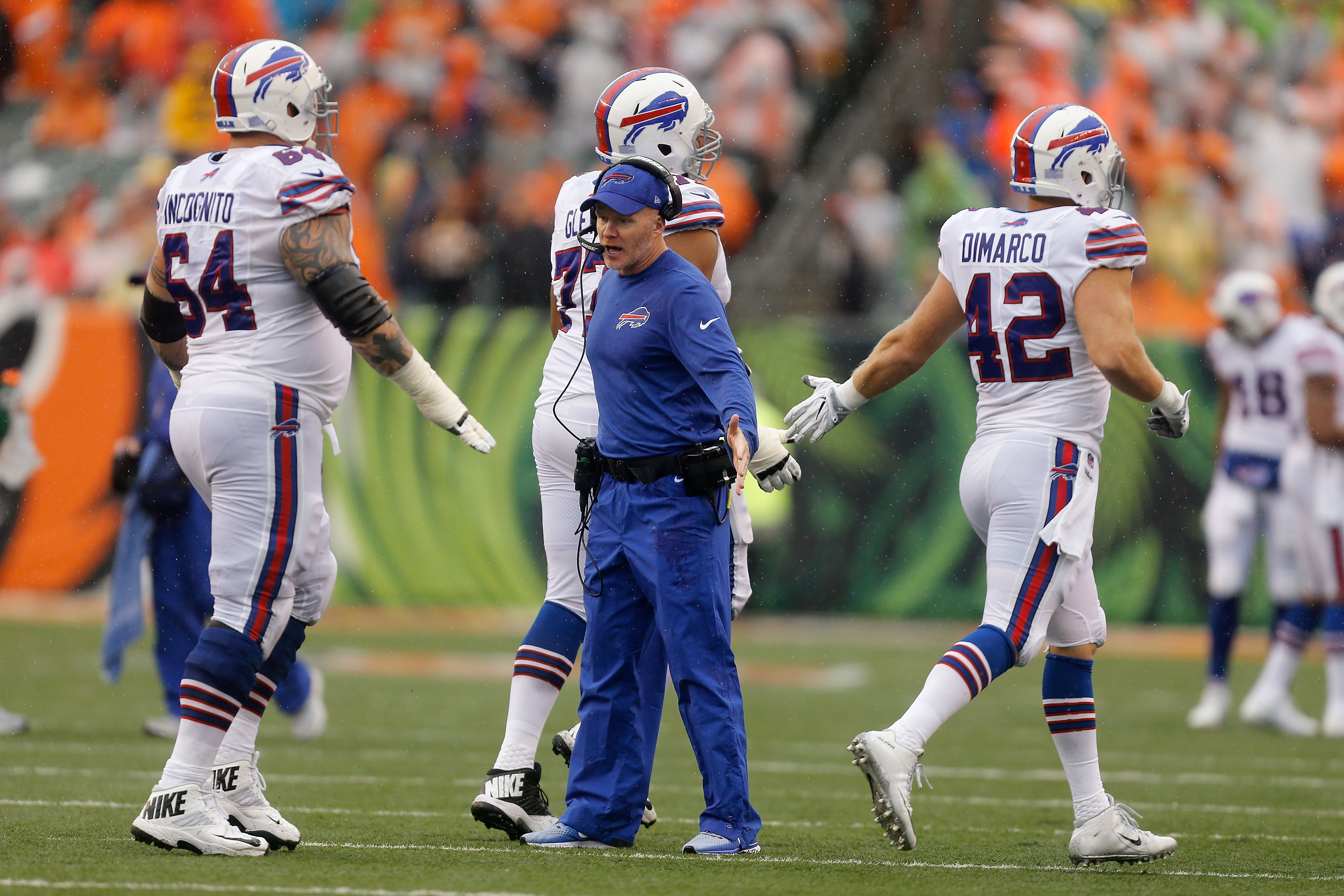 "In The Hunt" For Dummies by @2itb_buffalo

In the Hunt for Dummies will be a weekly installment that seeks to identify Buffalo’s path to the playoffs through what the Bills can control and what they can’t. Namely which out of town scores need to fall the right way to help the Bills secure a playoff berth. I’ll use the New York Times and ESPN Playoff Simulators to help identify which games carry the most weight concerning Buffalo’s playoff chances.

The narratives surrounding Buffalo’s generation-long playoff drought are many. Very few stones have been left unturned when it comes to exploring the failures that have plagued this franchise since Homerun Throwback. It’s a subject that has erased the dominance of the 90s and has bred a great deal of anxiety whenever the Bills get a sniff of relevance.

Thursday night didn’t present an opportunity for this Bills team to exorcise the demons of the drought but it was a game that would have provided some much-needed cushion for a franchise and fanbase that is desperate for it.

As the clock ticked down yesterday there was a lot of “we should have known better” going around. There was a fair bit of “I knew this loss was coming”, as well. I can’t say that my mindset regarding Thursday’s game against the Jets was negative, but it certainly wasn’t positive either.

The loss to the Jets featured every ingredient for a Bills Drought Letdown. Winning record, impressive, confidence building win, big ticket acquisition, downtrodden opponent, national broadcast. All of the reasons that the Jets game stood as a sign that these Bills were For Real have also featured prominently in each year’s slog to a mid-first round draft pick.

It says a lot about what this playoff drought has done to us as a collective fanbase when the first reaction of many entering a game like Thursday’s is trepidation. That the knee-jerk reaction is a nervous, sarcastic chuckle followed by some pretext as to why they’ll choke, is a pretty brutal way to go about rooting for a team.

Yet, here we are.

What’s probably been lost in the wake of the loss to the Jets is that this one game didn’t serve as a proverbial nail in the Bills’ coffin – although I’ve seen far too many references to watching the draft class for my liking. The Bills still exert plenty of control over their playoff fate, it just may be a more difficult path to that goal than it would have been with a win in New Jersey.

For me, the magic number is always going to be 10. Getting to 10 wins all but guarantees a playoff spot whereas 9-7 leaves a little too much meat on the bone.

My biggest concern following the loss is that the Jets were one of the last remaining opponents on the Bills’ schedule who were fairly easy to pencil in as a victory. Subtracting this game from the win column makes the path to 10 wins a bit more challenging and means we may need to watch the scoreboard a little closer.

Even with a win over the Jets, it wasn’t going to be child’s play to get to 10 wins for the Bills. Even accounting for San Deigo’s struggles, they won’t be an easy out and it’s just as difficult to pin down what kind of team the Dolphins are this year.

A win would’ve put the Bills at 6-2, needing to find only four, maybe three, more wins over the rest of the schedule in order to put an end to the playoff drought. A win would’ve let fans relax a bit more for challenging matchups against New Orleans or New England, a necessary cushion that would allow for a couple of expected slip ups down the stretch.

Instead we’ll be clenching the steering wheel a little tighter now, knowing that the team needs to be that much closer to perfect. Buffalo’s unfortunate residence in Tom Brady’s division doesn’t help matters when attempting to figure their standing in the AFC. Until shown otherwise, the Patriots are the odds-on favorite to take the AFC East, therefore hamstringing Buffalo’s path to the postseason.

That status, as New England’s little brother means that the fewer competitors the Bills have to deal with, the better. The fewer teams at or above .500 on the In the Hunt graphic, the better. If the Patriots and Chiefs are going to run away with their divisions, let them, just let them cannibalize their compatriots while they’re at it.

With that in mind, my approach to this will not to play oracle, plugging in wins or losses for the Bills, but identifying which conference opponents Bills fans should be rooting for and against (read: all of them) each week.

I picked a hell of a week to start this little venture (thanks, Joe) as there are no more than three head-to-head matchups which offer very little benefit to the Bills regardless of outcome. From here on out I’ll list each game, the outcome we should be rooting for and why. Feel free to chime in along the way if you’ve found different results affecting Buffalo’s outlook. After all, we’re all in this together.

Bills vs. Jets – Man, this one would’ve been really nice to win.

Colts vs. Texans – The loss of Deshaun Watson has probably doomed Houston’s season regardless of the outcome of this game. However, Indy’s struggles have all but eliminated them from the playoff conversation and pulling Houston out of the close race for the AFC South lead is beneficial for the overall wild card race. Plus a win would help boost Buffalo’s strength of schedule if a potential tiebreaker got that far down the line.

Bengals vs. Jaguars – This is a tough one to call considering the Bengals win over the Bills and Jacksonville’s race for the AFC South lead. I feel more concern over adding another win to the record of a team in a close race like the Jaguars than I do to a team like the Bengals who have had so many struggles. The NYT simulator says a Jags win does more for the Bills than the Bengals, so I’ll side with the analytics on this one even though I’d fear seeing the 9-6 Jags, Bills, Titans and Ravens all vying for three playoff spots come week 17.

Broncos vs. Eagles – This is an easy one, let another wild card contender get knocked off by a non-conference opponent. Go Eagles.

Ravens vs. Titans – As stated above, the race for the AFC South is tight and it’s the one that spooks me the most when it comes to strengthening records of potential wild card clubs. However, the Ravens are in the same exact boat at 4-4. So root for the Titans in this one.

Chiefs vs. Cowboys – Given Kansas City’s dominance this season, a win or loss here doesn’t move the needle all that much from a Bills perspective. KC already has the inside track at a first round bye and a win only helps that cause. Plus, a KC win, like a win for the Colts, helps Buffalo’s strength of schedule if needed.

Raiders vs. Dolphins – Even though they’re pretty much dead in the water, a Raiders win would keep their playoff life support going a bit longer. The Dolphins, on the other hand sport a threatening 4-3 record despite the Jekyll and Hyde act they’ve been pulling all season. It’s much more beneficial to the Bills for the Raiders to wake up and win this game. So paint your folding tables black this week, Bills Mafia.

The Bills playoff odds move to 63% on the New York Times playoff simulator after accounting for the loss to the Jets and wins for the Colts, Jags, Eagles, Titans, Chiefs and Raiders. That doesn’t account for the work the Bills have ahead of them in the form of the Saints and Chargers – games that would go a long way in aiding their playoff hopes – but it would be another small step forward if the scoreboard fell that way come Sunday.