Your Morning Dump... Where Brad dumps cold water on our frivolity 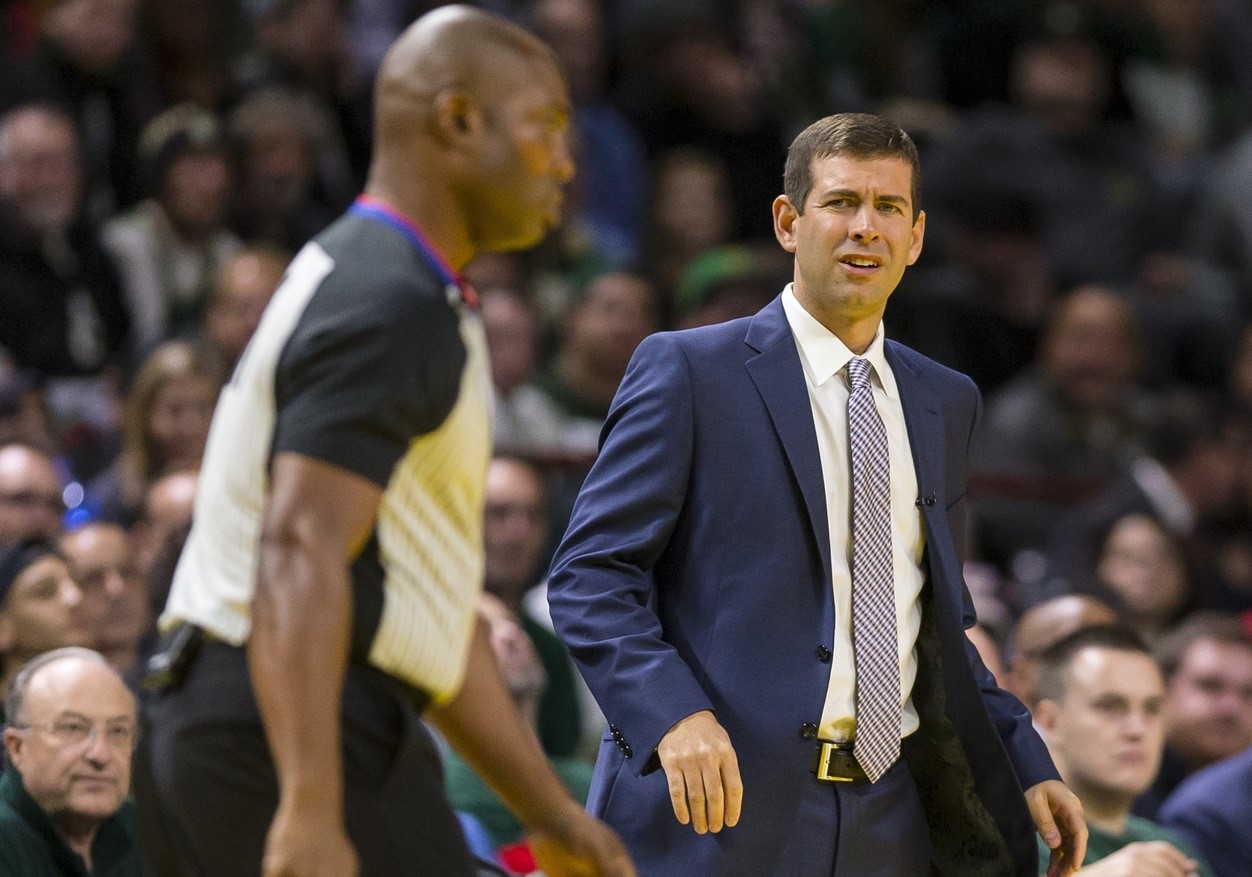 Your Morning Dump... Where Brad dumps cold water on our frivolity

Presented with the relevant facts — seven straight victories and a 7-2 record — Brad Stevens didn’t hesitate to offer his assessment.

[…] “The first thing I said when I walked into the locker room after that [Friday] win was, ‘We have 73 games left. And if we think we can get in the habit of playing the way we did in the first half, we’re wrong.’ So we’ll see.”

Typical “not too high, not too low” Brad Stevens. If the Celtics had been on a seven game losing streak, he’d come out and say “we have 73 games left and I’ve seen some good things.”

That’s who he is, and who he wants the Celtics to be. We can look at the schedule and say “hey, these guys can run this streak up to 10 before the next real challenge,” but the guys on the team can’t do that. If they look head, then Orlando, who is 6-3 by the way, will blast them. And we know the Celtics, for some reason, have had difficulty playing in Orlando.

So Brad is gonna Brad and try to keep these guys’ minds right down the middle. And since we’re popping toddlers’ balloons and slapping ice cream cones out of kids’ hands, let’s look at a few reasons why this seven-game streak, while fun, might be a bit of a mirage.

So, in the spirit of Stevens-ing ourselves back down from the high of the OKC comeback, this has been a nice stretch but the Celtics have caught some breaks along the way.

Also, since we’re being nit-picky…

So what does that all mean? Well, after extolling the virtues of the defense yesterday, it means that the C’s offense is still struggling to find its footing.

That’s to be expected early in the season, and the Celtics defense has been good enough where the offense has time to figure itself out.

Still, the offense does need to figure itself out. It’s not moving nearly quickly enough and for all their defensive acumen, it’s not translating into a ton of fast-break points. Every number I cited up there is simply a way to say the Celtics offense would benefit from running more. Obviously pace and fast break points would improve that way, but so would points in the paint and assisted two-point shots because guys would be getting passes for layups.

Another thing hurting the Celtics in the final two categories is the fact that they’re missing SO many cutters in the paint. How many times did Hubie Brown say “oh they missed him?” in Friday night’s game?

Every game, the Celtics will run a set that opens a guy up somewhere in the paint, and every game there is a player on the wing that misses the opportunity to make that pass.

All of this is correctable. The Celtics can very easily watch game film and see those missed chances and look at botched fast break opportunities and fix them. But as Brad Stevens would say, there’s a lot that needs improving, and the team needs to focus on fixing those things if they want to get to where they want to be.

Defensively, they’ve been great. Offensively, they need some work. This all stands to reason for a young team still finding itself after losing a star player and only just getting its full compliment of good role players worked into the offense. The key caveat to all of this is the small sample size that clearly makes none of these numbers super-reliable indicators of how the rest of the season will play out. The team just has to fix its mistakes and build on what they’re already doing well.

Page 2: Marcus Morris probably won’t play both games in the back to back

Morris said he was not as tired as he thought he would be during Friday’s game, and he said his knee felt great afterward. The Celtics will face the Magic on Sunday before visiting the Hawks on Monday, and Stevens said he plans to rest Morris in one of those games. But late Friday night, with the good vibes from the win still flowing, Morris smiled and suggested he might try to talk the team’s medical staff out of that decision. He is finally back, and he does not want to sit back down.

Globe: Marcus Morris is finally back, and he does not want to sit back down

Morris did a good job guarding Carmelo Anthony Friday night and was a big reason why the Celtics were able to come back.

Guarding Anthony requires being able to get up in his space without running the risk of a blow-by. Morris is capable of doing that, and it showed in the second half where Melo shot 1-12 for 2 points.

As for the back-to-back… I’d assume the plan is to play him tonight and let him get an extra day’s rest before the Wednesday game. The Celtics should be able to handle the Hawks without him, and I’m going to assume they’ll want some of his defense on Aaron Gordon while Al Horford checks Nikola Vucevic. It makes sense to start Morris in this matchup and bring Baynes off the bench. Baynes can handle Marreese Speights or Bismack Biyombo and protect the rim against Jonathans Simmons and Isaac.

This should actually be a fun matchup against Orlando. I think the Celtics match up well and there’s some fun young talent on both sides.

Back to Morris for a second…

I think we saw in the second half of the Thunder game how the Celtics decisions between Baynes and Morris in the lineup can depend on matchups. I think we’re also starting to see some numbers trending in the “don’t play Horford and Baynes” together direction.

Boston’s offense seems to be better when Horford is paired with four perimeter players than with Baynes.While Baynes DOES have a nice mid-range game, it’s still not enough space for the entire offense to get going. A lot of the earlier numbers from the first page of today’s Dump might see some improvement just from injecting Morris into the lineup with Horford.

Obviously, as I’ve said, it’s still too early to determine anything, but it’s not too early to notice a potential trend. A Morris/Horford pairing might be just what the Celtics need to shore up some offensive issues without sacrificing their defensive progress.

Brian Scalabrine: "Paul George only makes those in the Gatorade commercials." pic.twitter.com/rNZk88uNS7

NBC Sports Boston: Winning is Horford’s focus, not putting up big numbers  |  Five takeaways: A signature win for these C’s

Globe: Hayward closely watching Celtics. What he’s seen makes him smile  |  Gregg Popovich on his relationship with Manu Ginobili and the practice of resting players