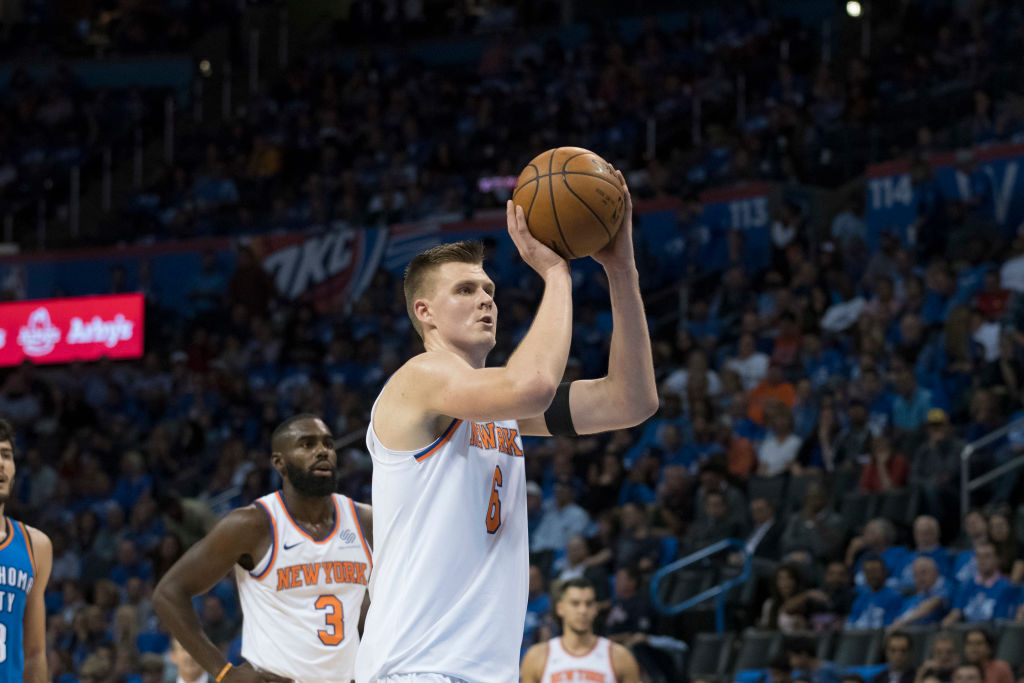 Along with another 30+ points for Kristaps Porzingis, came yet another victory for the Knicks on Sunday night. They defeated the Pacers by a score of 108-101, but this win certainly wasn’t as easy to come by as the rest.

Things didn’t look good for New York for quite a while. The Knicks looked lethargic, trailing by as many as 19 points. The group was low on energy and the home team undoubtedly wasn’t getting any benefit of the doubt from the officials. The referees appeared to miss a few calls, overzealously called a few unnecessary ones against the Knicks, and Kristaps Porzingis was getting mauled by the Pacers’ defense all the while. Porzingis and Co. let the frustration settle in and the effort wasn’t there. Their zone defense was poor, Indiana was excelling with the corner three ball, and Domantas Sabonis (16 points in 29 minutes) had his way with New York’s defense in the paint.

Needless to say, the Knicks looked ready to write this one off and simply move on to the next game. After all, last season’s team surely would have done so. But alas, this Porzingis led group is more resilient and hungry than any Knickerbocker team in well over a decade. On Sunday, they proved once again why that is.

The Pacers were throwing everything but the kitchen sink at Porzingis to slow (but not completely shut) him down. The opponent’s defensive pressure proved to be good enough. With Porzingis not in a comfortable rhythm and Enes Kanter sidelined with foul trouble (and the Knicks not benefitting from his offensive rebounding early on), the Pacers ran amuck as they made it rain from downtown, shooting a remarkable 48%. Their outside shooting killed New York…but in the final period, it was Porzingis who came alive.

The home team’s budding star had the crowd rocking as he scored 15 straight points and simply took over the game. Setting a new career-mark in points seems to be something of a weekly occurrence for Porzingis these days. Pouring in 40 total, this looked like an elevated effort that even the Knicks (and their respective opponents) haven’t been privy to just yet. He was absolutely phenomenal, providing validation to those who have anointed him with the potential to become the best player in the NBA. Challenged against an effectively adjusting defense, Porzingis fought right back. He made shot clutch shots from around the perimeter, forced his way inside with his back to the basket, and drew a bevy of shooting fouls each time he absorbed contact. His had terrific awareness on both ends of the court, as he used his length to block six shots as well. With his unique abilities, Porzingis controlled the momentum and eventually decided the outcome of this particular game all by himself.

Despite early foul trouble, Kanter continued cementing his place as Porzingis’ perfect frontcourt mate. He finished with 18 rebounds and a plus/minus of +20. Frank Ntilikina received his first taste of crunch time minutes, maintaining the tempo with Porzingis and orchestrating his team’s offense. The rookie tallied 10 points, 7 assists, and 3 steals. Lance Thomas checked in with 4:37 remaining in the third and didn’t come out until the final buzzer. His defense was key in keeping the Knicks upbeat and energized on the other end of the floor.

Safe to say, The Garden was roaring. This type of turnaround was one the local fans had not been privileged to in a rather long while. Porzingis continues to soar, with no signs of stopping. He’s taking the entire league by storm, and the Knicks are empowering the big man with the right pieces alongside him. This team is built the right way. The Knicks are admittedly preparing to maintain a strong run for the future. In doing so, they’ve taken the pressure off the group and tapered expectations so that they have time to grow. The current players are already finding success because the atmosphere is a seemingly more positive one without the doom and gloom of potential failure each time the team slips.

It’s refreshing to see all around and it’s giving this year’s team enough room to come into their own.