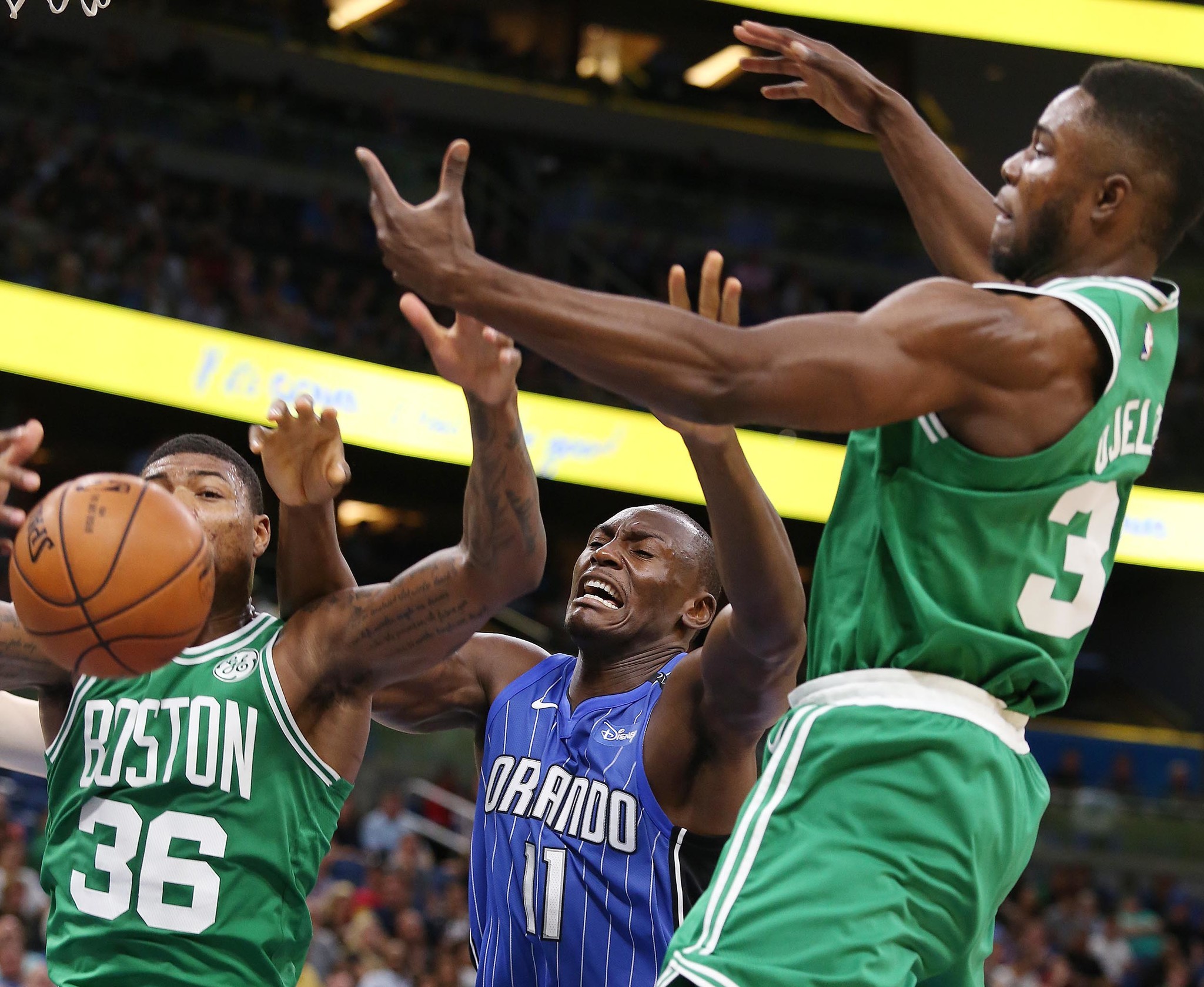 Center Al Horford said Boston’s guards have taken great pride in swarming the perimeter, and they welcomed the new challenge. In this game, the defense was just as active and annoying as it has been all season, allowing Orlando to make just 6 of 29 attempts (20.7 percent), as the Celtics rolled to a 104-88 win.

It was Boston’s eighth victory in a row — and second straight on the road against a team with a winning record — and it ended up being lopsided, with the lead swelling to as many as 23 points in the final quarter.

Coach Brad Stevens was asked about how his team’s top-ranked defense had been so enveloping once again. The opponent’s 3-point shooters hadn’t made 3-pointers. The wins were flowing.

But Stevens seemed to understand that there is danger in putting this team on a pedestal, especially now. So he gave a nod to the defense before shifting the focus to a flaw.

“Guys did a really good job again of flying around and challenging shots and making it tough, switching at the right time, all that stuff,” he said. “If our offense catches up to our defense, hopefully we’ll be better. But our offense, we leave way too many points on the board.”

The Celtics hold the NBA’s best record after yesterdays 104-88 victory in Orlando. With upcoming games against the Hawks tonight and Lakers on Wednesday, expect the team to build upon its eight game winning streak.

They beat the Magic in an ugly, grind-it-out fashion. Neither team could generate much offense — the game was a tough watch for the majority of the evening.

Despite the sluggish energy, Boston won the game with its defense, as it has throughout this young season. They’ve now held opponents to under 90 points four times this season, a feat only accomplished six times last year.

The game featured a balanced scoring attack with six Celtics reaching double figures but nobody getting to 20 points. Marcus Smart, despite shooting 4 of 12, found ways to stuff the stat sheet, finishing with 11 points, 8 rebounds, 8 assists, 3 steals and 1 block. He was also +32, by far the highest mark on the team

Orlando has emerged as one of the league’s early surprises, and entering Sunday’s matchup, they sat only one game behind Boston at the top of the East. Without point guards DJ Augustin or Elfrid Payton, the Magic struggled to find quality shots, and finished the game shooting 36 percent from the field. They entered the game as the league leading three-point shooting team, but Boston held them to only 21 percent.

The gap between Boston and the rest of the east should only grow by week’s end. Cleveland continues to struggle, losing 117-115 to the Hawks last night and falling to 4-6. Their early season issues have been shocking — they certainly don’t look like the powerhouse of previous years, but with LeBron James on the roster, you never know when they can flip the switch.

Boston has been able to withstand the injury of Gordon Hayward. Meanwhile, Cleveland desperately needs a spark, and they’re hoping to get it when Isaiah Thomas returns. He participated in pregame warmups on Friday night versus Washington. There are still no indications when he’ll return.

Our old friend is itching to get back on the court. Here’s what he tweeted last night:

People forget and act like I didn’t bust they favorite PGs ass all last season LOL.

He’s not lying. He’s coming off an MVP caliber season, his new team is struggling, and his old team keeps winning. This is his contract year, but he can’t get on the court. I can sympathize with his frustration. Despite the concerns about his hip, I’m predicting that when he returns, he’ll serve as the spark plug Cleveland desperately needs.
Other Recaps: ESPN/AP | MassLive | WEEI | NESN | USA Today | Orlando Sentinel | Boston Herald

The Boston Celtics and Philadelphia 76ers might disagree on the value of Jahlil Okafor.

The Celtics have expressed plenty of interest in the Sixers big man, who wants out of Philly no matter what it takes. Philly appears willing to accommodate Okafor’s request, but it’s possible the price it has in mind won’t resonate with Boston, according to the Boston Globe’s Gary Washburn.

“The Celtics have long held interest in Okafor, but as more of a project than an immediate contributor,” Washburn reported Saturday. “Boston is also not willing to part with a first-round pick for Okafor.”

Washburn didn’t specify whether the Sixers actually have requested a first-round pick for Okafor, or which of Boston’s first-round picks — it has several future first-rounders from other teams — they would want.

Still, considering Okafor was the third-overall pick in the 2015 NBA Draft and is just 21 years old, it’s pretty crazy to think a team isn’t willing to part with a first-rounder to obtain him.

Jahlil Okafor cannot escape the Boston headlines. While he hasn’t come close to living up to pre-draft expectaions, and he’s on track to becoming a bust, the Celtics have always been interested in acquiring the 7-footer… depending on the price.

The Celtics almost traded for him two years ago at the deadline and again during the draft. At the time, some even suggested trading the 2016 number three pick (Jaylen Brown) for Okafor, which would have been a disaster.

His value has since plummeted, and the Sixers will unlikely get a first rounder from any team, let alone the Celtics. Danny Ainge should not budge. The whole league knows Okafor doesn’t wanna be there and Philadelphia has no need for his skillset. Sixers GM Bryan Colangelo declined Okafor’s fourth year player-option — an unprecedented move on a former top-3 pick.

The Celtics (I’d imagine) are hoping to get him for nothing. If another team overpays, whatever, but if the sixers buy him out, Boston can outbid other teams with its $8.3 million exception from Hayward’s injury.

There are countless red flags with Okafor. He has poor lateral quickness. He hasn’t shown any defensive promise. He’s a traditional big stuck in a changing NBA, and it seems like his breed is getting phased out.

Regardless, I’d love to see him in green (for the right price, of course). Long 7-footers with skill don’t grow on trees. He’s playing behind Joel Embiid and Philly has consistently put him in a bad situation to develop.

Additionally, the Celtics could use some youth in their big-man rotation. Their guards and wings are loaded with young talent, but they’re missing a big guy who can join that core. In Okafor, they’d be buying low on a former blue-chip prospect. His post-up offense is alreadly advanced, and if the Celtics could turn him into an average defender, it’ll be another fleecing by Danny Ainge.

Danny’s been the Celtics GM for almost 15 years, but he apparently still can’t turn on the lights at the practice facility. It’s good to know a broken leg isn’t affecting Hayward’s shooting form.