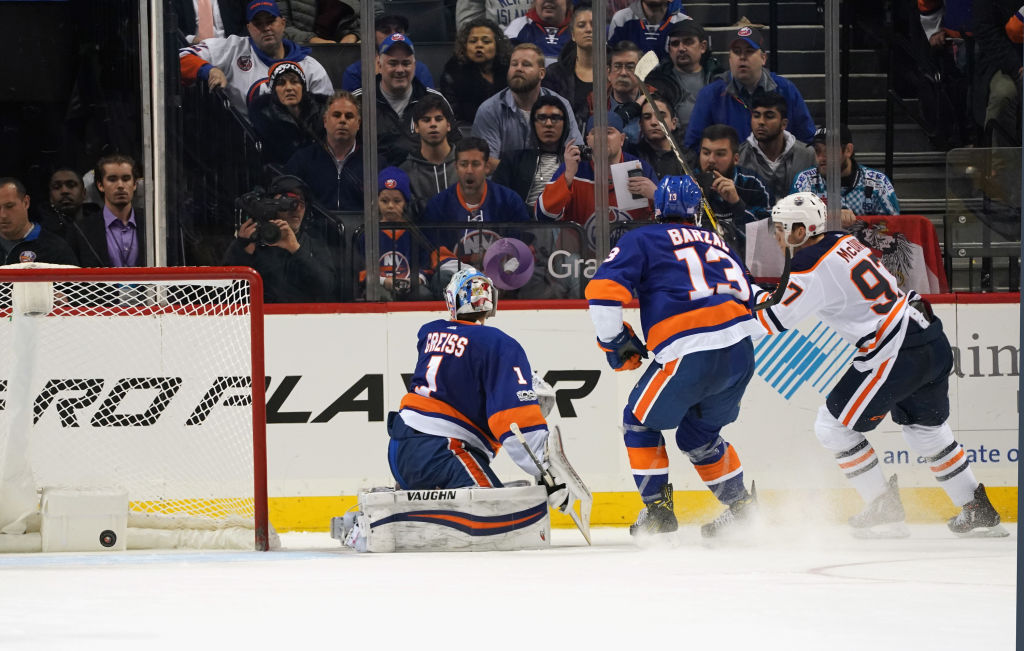 NEW YORK — An overtime scoring opportunity for the Islanders on one end of the ice turned into a game-winning goal for the Edmonton Oilers on the other end.

Connor McDavid picked up the puck in the Islanders’ end, after New York whiffed on a scoring chance, and charged the other way. The Oilers forward dropped the puck to Leon Draisaitl, who sent a quick pass back to McDavid for the game-winning goal. McDavid’s only goal of the night came 38 seconds into the overtime period

Before that, the only goals in Tuesday night’s loss had come in the second period. Draisaitl had given the Oilers the 1-0 lead at 1:59 of the middle frame after he forced Jason Chimera to turn over the puck and then blasted it through the legs of Thomas Greiss.

Jordan Eberle tied the game up at one at after firing a wrist shot past Oilers’ starter Cam Talbot. The goal was Eberle’s fifth of the season and the fourth time rookie Mathew Barzal had assisted on a goal from the organization’s newest member.

The Islanders head to Dallas on Friday to face the Stars in the first game of a two-game road trip.

1. This will be the game remembered for the chance that got away. John Tavares was able to pickpocket McDavid right in front of the net and sent a quick pass to a wide open Barzal.  The pass was either too quick or Barzal just wasn’t ready for it and flubbed the scoring chance from right in front of the net, which allowed McDavid and Draisaitl to fly up the ice the other way.

“I had (Barzal) coming in late there,” Tavares said about the overtime play. “I just tried to be patient and it was my bad I just kind of put it a little bit too inside on him. He’s so quick, he hits the hole so fast and he got their quick. I have to put that on his tape and make it an easy play for him.”

It’s a loss that will sting a bit for the Islanders. which had been the better team for most of the game. The Islanders got better as the game went along and outshot the Oilers 13-2  in the third period, as well as 37-25 total through the 60-plus minute affair.

2. “I think (Barzal) may be surprised (Tavares) that he was that open, and the puck was bouncing. By the time he settled it he just kind of fired it. He wanted a nice hard pass to get it. It was a Grade-A chance and then Nick (Leddy) chased down McDavid. I think in watching it we could have maybe pursued a little harder on the way back, but it was a great play. A great shot. That’s what overtime is.” — Doug Weight on the Oilers OT winner

3.  Prior to the goal, McDavid had been held at bay by the Islanders. The Oilers superstar only had two shots on net all night, which included the overtime goal. His only other shot of the night came in the first period, but otherwise McDavid went relatively unnoticed for most of the night. McDavid did have a shorthanded scoring opportunity in the second period, but Ryan Pulock was able to hang with him, force McDavid to the side of the net and sweep the puck away.

4. Nikolay Kulemin left the game at 16:09 of the second period after being on the receiving end of a dangerous hit from Eric Gryba. The Oilers defenseman sat in the penalty box for two minutes and Kulemin did not return to the game due to an upper-body injury from the hit.

Weight didn’t have much of an update after the game, telling reporters that Kulemin will have to be evaluated and undergo some testing. The Islanders head coach categorized it as day-to-day, but he said he would have an update on Wednesday.

5. Coincidentally, the Islanders played their best period of the game down a man and having to mix and match lines. The Islanders generated chance after chance in the third  period, including a 90-second span  that looked as though New York would finally hit the back of the net and capture the lead.

6. Mathew Barzal continues to find new ways to impress people. The rookie extended his points streak to six games with his assist on Eberle’s goal and he had that gem of a move in the first period that nearly earned hims his fourth goal of the year.

we get it mathew they lost the griffin reinhart trade pic.twitter.com/hxw1S1Prpf