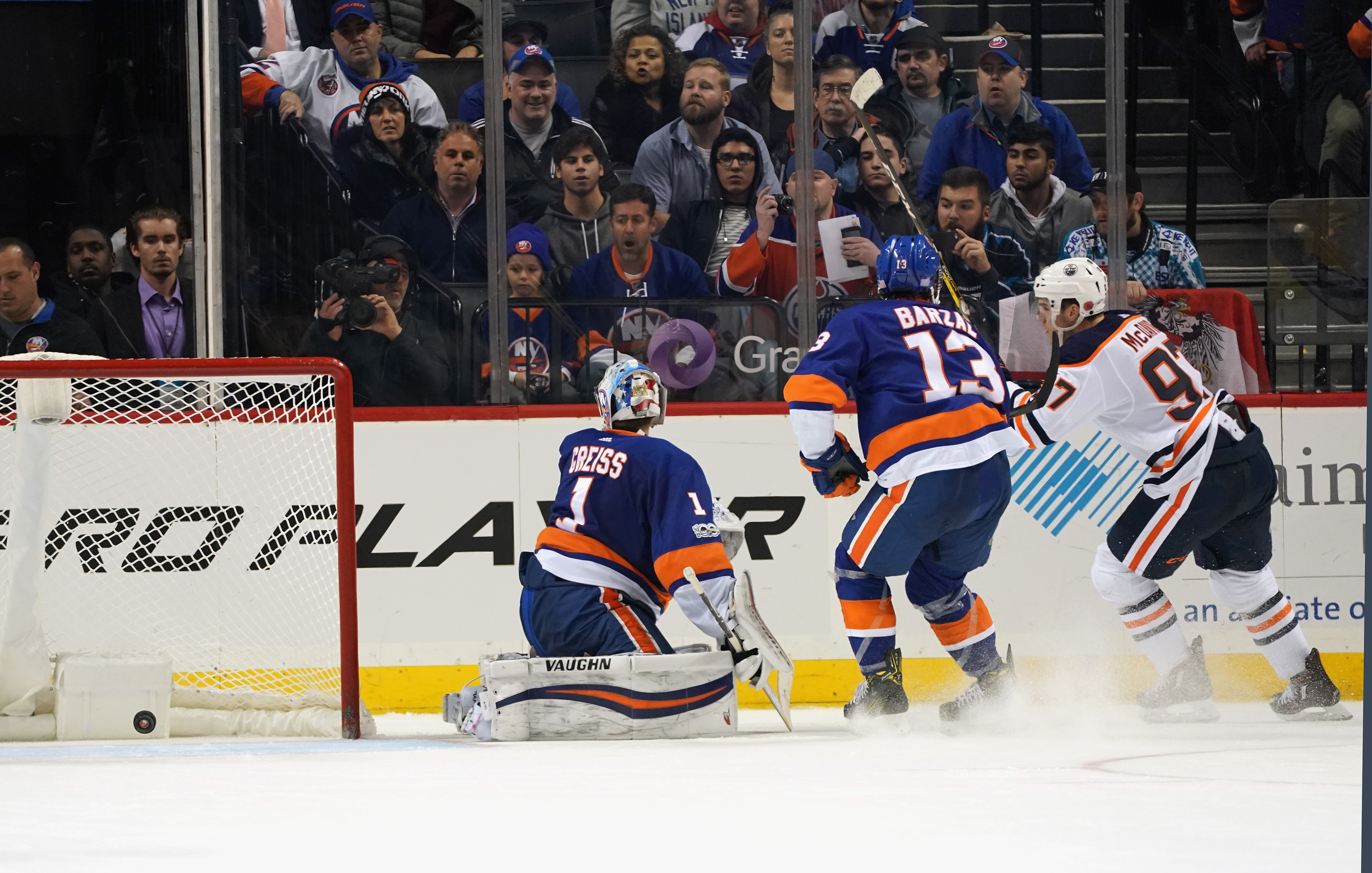 A four game road trip that will go a long way towards determining Edmonton’s fate this season has started off on a good foot. Even after a downright terrible third period, the Oilers were able to find a way to pull out two points in overtime, knocking off the Islanders 2-1.

It’s Edmonton’s second straight victory over the Isles in New York, and tonight’s decision pushes Edmonton’s all-time record in Brooklyn to 2-1-0. Tonight’s victory also sets up Edmonton quite nicely for this roadie, which swings into Newark on Thursday night.

Cam Talbot and Thomas Griess were both solid tonight for their respective teams. The goalies both turned in a perfect first period before the scoring gates would open in the middle frame.

The Oilers drew first blood, as Leon Draisaitl picked up a loose puck over the Islander blueline after winning a foot race and snapped a wrist-shot through the five-hole of Griess at 1:59. The Islanders would respond moments later, however, as Matt Barzal found old pal Jordan Eberle along the far wall. Eberle would rifle a shot over Talbot’s shoulder to tie the game at 4:43 of the middle frame.

New York would flat out dominate the third period, controlling play and firing double digit shots on the Edmonton net. Luckily for the Oilers, Talbot was on his game tonight and was perfect through the high-event frame. Talbot’s heroics would get Edmonton one point, sending us to overtime.

In overtime, the Oilers would commit a dangerous turnover in front of their own net, but John Tavares could not make them pay. As a result, Leon Draisaitl was able to carry the puck into the Islander zone before firing a backhanded pass to McDavid, who quickly put a shot over Griess’ shoulder at 38 seconds to give Edmonton the 2-1 victory.

Cam Talbot was Edmonton’s best player tonight. He made 36 saves in the victory and was the sole reason Edmonton got through a disastrous third period. Edmonton needed this type of game out of Talbot tonight, and he stood tall as he did so many times last season.

Brad Malone impressed in his return to the lineup. He nearly opened the scoring in the first period on a nifty backhander in the slot, and played his hard and desperate game all night long. Prior to getting injured, I thought Drake Caggiula played the same urgent game tonight. He stood out to me in a positive way.

Shout out to the Oiler penalty kill, which was a perfect three-for-three on this night. Other players that stood out in a good way to me? McDavid, Draisaitl, Darnell Nurse and Zack Kassian.

Edmonton’s powerplay went 0-for-two tonight and looked pretty poor on their second opportunity. They had a good first 90 seconds on their first look, but hesitated to put the puck on net. The powerplay has to get out of its current funk if the Oilers are to go on some sort of winning streak here.

Milan Lucic did get an assist tonight, but I thought he had a poor game overall. He looked slow to me, and I thought the play died on his stick far too much in the offensive end. Lucic has had a really bad start to the season, but he is not a bad player. He needs to get back to his game, which is a hard-hitting, smooth passing style. Seems to me like he is trying to do far too much right now.

Thought Eric Gryba, who took a really bad penalty and struggled playing the puck, Oscar Klefbom and Matt Benning had poor nights. Klefbom, much like the powerplay, really needs to break out of his funk if Edmonton wants to turn this season around.

Edmonton’s performance in the third period may have been their worst of the season. The Islanders completely controlled play and Edmonton struggled to gain the offensive zone, let alone set up and generate chances. If not for Talbot, the Oilers would have lost this game in that period. Edmonton has to be better than that on Thursday night.

I thought the first forty minutes of this game were really even, but Edmonton fell off a cliff in period three. It seemed to me that they were playing to not lose, which is a very dangerous game. Luckily Talbot bailed them out and then McDavid sealed it. It would be nice if that sparks a little confidence for a group that is very fragile right now.

All in all, those are two points that this team desperately needed. The Oilers need wins on this road trip, and tonight is a step in the right direction. Hopefully it is the start of some sort of winning streak, because lord knows this team needs one right now.

Edmonton may have stolen one tonight, but the fact of the matter is they found a way to win. They could use another strong showing in Newark.

The Oilers will go for a season series sweep of the New Jersey Devils for the second year in a row. The Oil doubled up Jersey 6-3 last Friday night, and will look to beat them for the second time in three days. The Oilers are 0-4-0 in games following a win, so they will also be looking to buck a nasty early season trend.

The Oilers won their only visit to Jersey last season in overtime, beating the Devils 2-1 in early January. They’ll hope for a repeat performance in two nights.