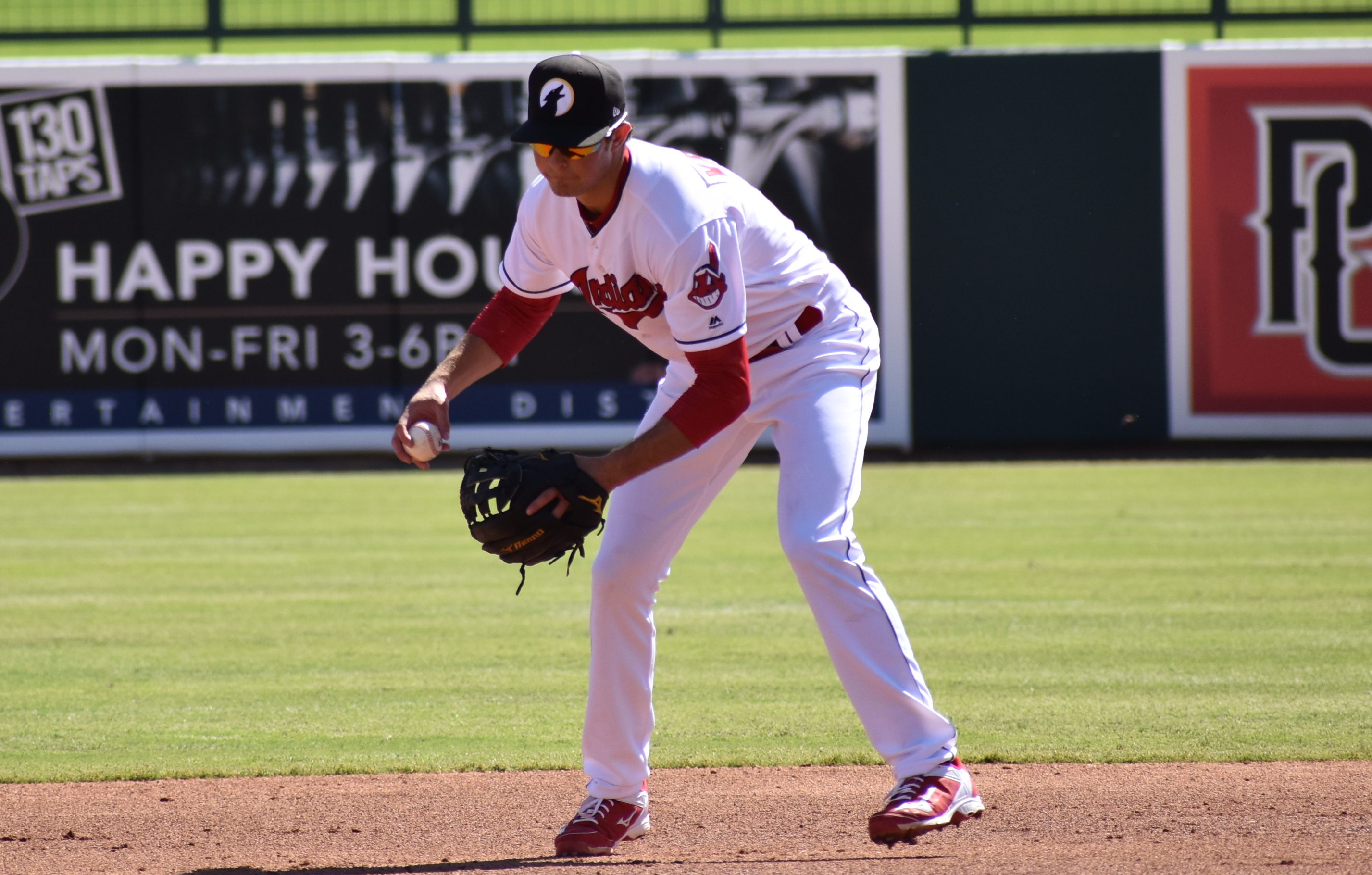 Throughout the off-season, we’ll be taking a look at how healthy the Indians are position by position in the minor league system. No matter what is happening at the Major League level, there is always need for depth throughout the minor leagues at every position, although the need is obviously greater in some places than others.

Of those, the need at second base is not extremely great at the moment. Already there is a conflict with having too much talent there for the Indians as both Jason Kipnis and Jose Ramirez have cases to start at second with plenty of utility options behind them including Erik Gonzalez, Giovanny Urshela and Yandy Diaz. Because all these players have at least a bit of MLB experience and are already in the fold of the Major League team, we’ll ignore them for now and look at the health below.

Looking at BurningRiverBaseball’s top 50 Indians prospects released earlier this month, there are only three players listed as second basemen in the group with only one in the top 20, Tyler Krieger at 14. There are, however, nine short stops including three in the top ten. Many of these have at least some experience at second base (and/or third) and they need to be considered in this equation as well. Just as the best position player in little league is generally the short stop, that trend continues through high school, college and the minor leagues. That trend has to stop somewhere, however, as there is room for fewer and fewer short stops at each level.

For example, in the 2017 draft alone, the Indians drafted and signed Tyler Freeman, Jesse Berardi, Ernie Clement, Tyler Friis and Dillon Persinger as either a second baseman or short stop and all played between AZL and SS this year. That makes five middle infielders for two teams and doesn’t consider Jose Fermin, Jhan Rodriguez and Wilbis Santiago who were already with the franchise at those levels. Some positional movement had to take place and in the end, Freeman stayed at short for the AZL team while Berardi played mostly short for Mahoning Valley with Clement, Friis and Persinger splitting time between short, second and third with Nolan Jones (who was also drafted as a short stop and moved).

The point here is that the Indians top second base prospect is almost certainly not currently playing second base. Of course, top prospect means different things to different people. Let’s break down the position by a few of those things.

The 2017 Columbus Clippers (much like 2016 Clippers and the 2015 Clippers…) were not really the peak of the Indians farm system, but rather a waiting room for AAAA replacements for the MLB team. With that, they didn’t really have a prospect second baseman as Ronny Rodriguez took most of the starts at second with Michael Martinez and Josh Wilson filling in behind. The entire roster was filled with retreads and never-will-be’s, but one player who could have a future in the Majors did stand out.

Known as a defensive specialist, Eric Stamets blew by expectations in 2017, hitting 26 doubles and 16 home runs to add power to that profile. While he doesn’t project to be a Major League starter at any position, he has the best chance of making an impact at second. He should be MLB ready by mid-2018 and Francisco Lindor is under team control for quite some time still, so there is no room for advancement. Instead, Stamets could be a better utility and short term starter option than Erik Gonzalez, who currently stands to hold the role in 2018. If the Indians do absolutely need someone for the spot due to injury or another unforeseeable situation, Stamets may in fact be the only MLB ready option at second base or short stop.

Highest Ceiling, Not Quite Ready

Coming in 6th in the Burning River rankings, Willi Castro is the most likely short stop on the list to move to second. Yu-Cheng Chang is a year older and a level higher (AA compared to A+), but when the pair played together in 2014, it was Castro who moved to second and Chang to third as Alexis Pantoja took many of the starts at short. While he hasn’t played there since, Chang’s lack of range (compared to most short stops) and his arm strength make him a better fit at third than second. Castro, however, should be able to transition smoothly.

If there is a player who reminds me of Jose Ramirez in the current system, it is Castro. He’s a slick fielder with a lot of flair and, in 2017, he started hitting like we’ve been expecting him to. With Lynchburg, he batted .290/.337/.424 with 11 home runs and 24 doubles. He will likely play in Akron next year and remain at short while Chang moves to Columbus, but at some point the Indians will have to deal with their high number of elite players at short and their complete lack of such at second.

Also in this section is Akron’s actual second baseman in 2017, Tyler Krieger. Krieger may be an example of why players shouldn’t be advanced too quickly as he had a rough year in AA in just his second season with the team. While he was drafted in 2015 out of college, he missed the whole year with injury, then jumped straight to Lake County, then Lynchburg in his first season. This year, he went from the World Baseball Classic and playing against Major League competition with team Israel to AA, then finished out the year in the Arizona Fall League. He struggled in all but the WBC, but remains the Indians top pure 2B prospect. While he is three years older and a level more advanced than Castro, I expect Krieger to repeat AA next year and for Castro to catch up to his level.

In any event, a large percent of minor leaguers fail out long before they hit the Majors, so it’s best to have as many options as possible. At the moment, it appears the Indians have about three options that could be available at second in the next three years and two are currently short stops. This isn’t particularly good.

As bad as things are at the top, there is always hope at the bottom. Of the four new SS/2B on the Scrappers this year, Ernie Clement and Jesse Berardi had solid seasons and were both ranked in the top 50 Indians prospects with Tyler Friis not too far behind. Falling just beyond  the top 50 was pure 2B, Sam Haggerty. He played in Lynchburg this year and stole 49 bases in his third pro-season. Like Krieger, he’s already 23 and he’s still a level behind Krieger, but he has an interesting mix of speed and OBP that could potentially play well at the top of a line-up somewhere. His age, however, doesn’t make him a great long term future option.

To bring up Krieger one last time, he may have finally separated himself from another player who remains a complete question mark. In 2015, the Indians drafted Mark Mathias and Krieger back to back, a pair of college educated, injury riddled middle infielders. While Krieger has advanced beyond his injury, Mathias had a huge set back this Spring when he separated his shoulder during a Major League game. He didn’t return until the very end of the season with Akron and will likely be 23 in AA next year. While he was originally considered more highly than Krieger, that has flipped and now no one knows what the Indians will get out of Mathias. If he can come back healthy in 2018, he could join the Castro and Krieger as players only a year or so out, but for now there’s little confidence he can return that quickly.

Looking into the long distant future, the latest crop of international players to come up through the DSL is extremely uninspiring. Wilbis Santiago is too old for his level, Jhan Rodriguez is an error machine and there’s little otherwise that jumps out. That could change shortly, however, as the Indians signed one of the top players in the world this summer in Aaron Bracho. While Bracho is considered a short stop right now, it’s expected he could move to second where his plus bat could quickly make him the highest ceiling prospect at that position within the system. Of course, no one has actually seen Bracho play professionally yet, so this is all hype and speculation until he actually gets to the US.

Overall, things aren’t great at second base for the Indians minor league teams. Jose Ramirez should provide a steady force through 2023 with Kipnis under control through 2020 as well, so it might not matter, but it would be nice if the Indians had a bit more of a safety net beneath them. It appears they addressed that between the draft and international signings this year, but things could be rough for a little bit until those players are ready.