Report: Relief Pitcher Will Be A Big Priority For Mets In Free Agency 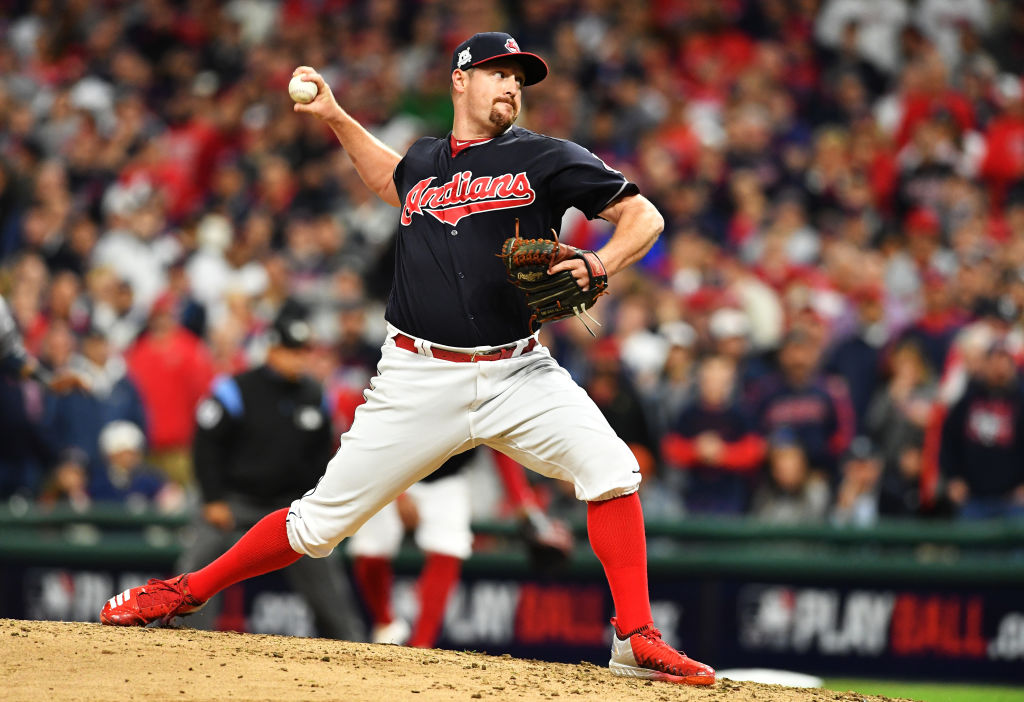 Report: Relief Pitcher Will Be A Big Priority For Mets In Free Agency

The New York Mets have a lot of needs in free agency, but General Manager Sandy Alderson appears to have made his bullpen a priority. Mike Puma of the New York Post reports that the Mets are planning on adding another quality late inning reliever to their bullpen in free agency, making that their top objective ahead of improving the offense or adding a starting pitcher. The Mets are likely going to stay away from the very top of the market, as potential closers like Wade Davis, Greg Holland, and Addison Reed are unlikely to come to them and pitch as setup men behind Jeurys Familia and A.J. Ramos. Puma’s source provided a few names the Mets might be looking at, and here’s a quick breakdown of each of them:

CLEVELAND, OH – OCTOBER 11: Bryan Shaw #27 of the Cleveland Indians pitches in the sixth inning against the New York Yankees in Game Five of the American League Divisional Series at Progressive Field on October 11, 2017 in Cleveland, Ohio. (Photo by Jason Miller/Getty Images)

RHP Bryan Shaw: Shaw, who spent the past five seasons under the tutelage of new Mets’ manager Mickey Callaway in Cleveland, makes a lot of sense as a fit. The Indians relied heavily on Shaw as a setup man over the past few years, and he has pitched very well, appearing in 79 games last season and pitching to a 3.52 ERA. Shaw is also a ground ball machine, something the bullpen currently lacks, and his familiarity with Callaway could be an x-factor. MetsBlog’s Matt Cerrone hears that Callaway is pushing hard for the Mets to sign Shaw, so there is a strong possibility they could be aggressive to secure his services. Shaw will likely command a three year deal worth about $9 million a year, which is longer than the types of deals Alderson usually gives relievers, but with all of his top arms set to be free agents after 2018 a longer commitment for Shaw could make some sense.

RHP Brandon Morrow: Morrow, a converted starter, had a breakthrough season for the Los Angeles Dodgers in 2017. Dodgers’ manager Dave Roberts relied heavily on Morrow in the playoffs after he posted a 2.06 ERA in 45 regular season appearances. Morrow became the key setup man for Kenley Jansen, so the Mets may have to fight the Dodgers for Morrow’s services if they decide to go that route.

RHP Luke Gregerson: Gregerson had a down year for the World Series champion Houston Astros, pitching to a 4.57 ERA in 65 appearances, but he does have a strong track record as a setup man. The Astros may look to shuffle up their bullpen heading into 2018, so Gregerson will likely be looking for a new home and could be a nice bargain for the Mets if they miss out on Shaw.

RHP Brandon Kintzler: Kintzler had a big year for the Minnesota Twins and Washington Nationals, pitching to a 3.03 ERA and 1.15 WHIP. The Twins used Kintzler as their closer before trading him to Washington at mid-season, where he helped stabilize what had been a dumpster fire of a bullpen. Kintzler profiles as a poor man’s version of Shaw since he is another right hander who relies heavily on ground balls, putting him into the second tier of options Alderson might prefer.

LHP Mike Minor: Minor, a converted starter, resurrected his career as a reliever with the Kansas City Royals in 2017. The Royals used Minor as a lefty specialist, and he was dominant in that role, limiting southpaws to a .163 batting average against him. Minor had an outstanding season overall, pitching to a 2.55 ERA and 1.02 WHIP in 77.2 innings pitched. The Mets should definitely look into Minor as another lefty to take some pressure off of Jerry Blevins in the LOOGY role. One x-factor for the Mets here could be new pitching coach Dave Eiland. Eiland worked extensively with Minor in Kansas City and could help recruit him to join the Mets’ bullpen.

This list is full of solid options for the Mets, whose best move would be to sign Shaw and Minor to add to their bullpen. This would give them five quality relievers to start with, allowing the other two or three spots to be filled in camp competitions. The Mets’ ability to spend money remains questionable as always, but if they are truly serious about contending in 2018 there is no reason they can’t splurge on two relievers from this list.