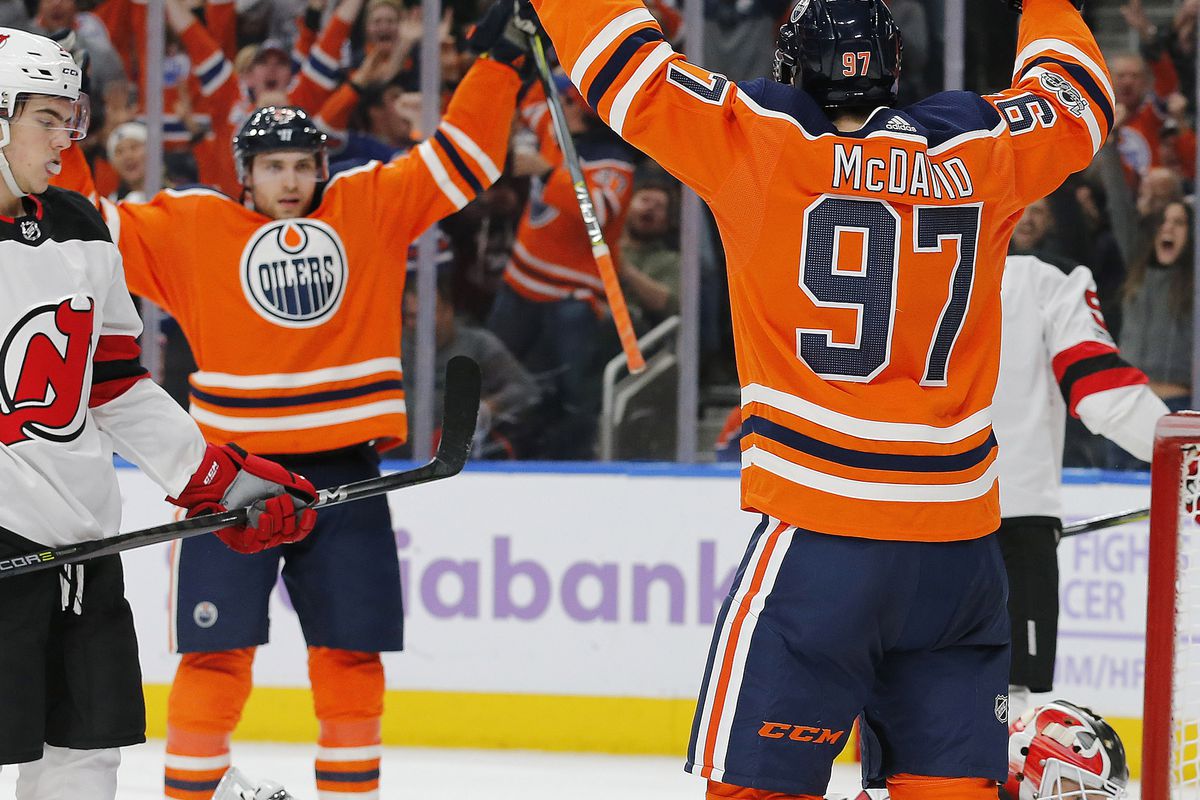 Tonight, the Edmonton Oilers travel over the bridge from Brooklyn to Jersey for game two of their four game eastern road trip. After a date with old friend Jordan Eberle on Tuesday, the Oilers will meet former franchise face Taylor Hall and the Devils for the second time in six days. The Oilers are looking for their first back-to-back victories of the season tonight.

The Oil wacked the Islanders in overtime 2-1 on Tuesday, while Jersey was taken out like an accessory after the fact by St. Louis 3-1. The Oilers are dealing with another injury, as Drake Caggiula will miss tonight’s game with an ankle injury he suffered in Tuesday’s win while blocking a shot. Anton Slepyshev will try and draw back in to replace him.

Cam Talbot gets the start for the Oilers, while Corey Schneider goes for the Devils.

Edmonton: The Oilers need a good first ten minutes tonight, and must be ready to go off the hop. Edmonton had a strong start against Jersey last Friday night and they were able to control the play from there. Against a quick and confident Devil team, a good start will once again be key tonight for the Oil.

New Jersey: Speed, speed, speed! The Devils are one of the fastest teams in the NHL, while Edmonton is one of the slower groups in the league. If the Devils can wheel free tonight and play their quick game, they’ll be in control like Tony Soprano in the Meadowlands.

Edmonton: Brad Malone has worked extremely hard in his four games with the Oilers this season and has impressed in every single one of them. Tonight he’ll be in the lineup again, and I’ll be watching him closely. Malone nearly scored on Tuesday night and was strong on the PK. He’s one of those glue guys that the Oil were missing early in the year, and is awfully close to being a made man with the Oil.

New Jersey: There are some terrific rookies in the NHL this season, but one who is flying under the radar is Jersey’s Jesper Bratt. He wasn’t too noticeable last Friday in Edmonton, but I’ll be watching him tonight to see what kind of performance he puts on. The young and speedy forward has impressed early on and has earned a spot in Jersey’s top-six.

Edmonton’s only change looks to be Caggiula’s omission, with his replacement still to be determined. If Slepyshev is good to go, it’ll be him in the lineup but that isn’t certain at this point. If not Slepyshev, Jujhar Khaira will get another chance to impress. If it is Khaira, he’ll need to shoot his cuffs and put on a show to stay in the lineup.

The Devils top-line has meshed almost as good as Tony, Paulie and Silvio did at the top of the Soprano’s food chain. That trio will be together again tonight and will be a handful for the Oil to handle. It’s expected that Stefan Noesen will draw in up front for Jersey, while Ben Lovejoy draws in on the blueline.

The Oilers have won three straight against the Devils and are trying to sweep the season series for the second consecutive year. In Edmonton’s last trip to the swap, they knocked off the Devils 2-1 in overtime. That meeting came in early January. As per play-by-play man Jack Michaels, the Oilers are 8-2-3 against the Devils in their last 13.

The Oilers are 2-6-1 against the east this season, and still have two more games against the conference during this road trip, which sees the Oil play the Rangers on Saturday and Capitals on Sunday. In Edmonton’s win over the Devils last Friday, the club had it’s best offensive performance (six goals) and had six different goal scorers.

The Devils, as mentioned above, are coming off a loss on Tuesday night and are 6-3-1 in their last ten games. While Jersey has been great on the road (5-1-1), they are a pedestrian 4-3-0 at home on the season. Their lone regulation road loss was against Edmonton last week.

The Oilers are looking to break a few trends tonight, including winning their first back-to-back games and third against the east this year. There is a lot working against the Oil tonight, but they are playing a team they have had success against and in a building they have done well in over the years.

That said, the Oil’s struggles after a win continue tonight as Jersey wacks the Oil 3-1. Hall, Bratt and Santini light the lamp like it’s the Bada Bing for the home side, while Strome fires the lone counter punch for the visitors.

Prediction aside, this is a huge game for Edmonton. A win tonight would put them back into the playoff picture for the time being, and would set them up for a very successful eastern road trip. Edmonton desperately needs a winning streak here, and tonight the opportunity is right in front of them.

Hopefully the Oilers woke up this morning and bought themselves a gun. Lord knows they’ll need it to counter Jersey’s firepower tonight.