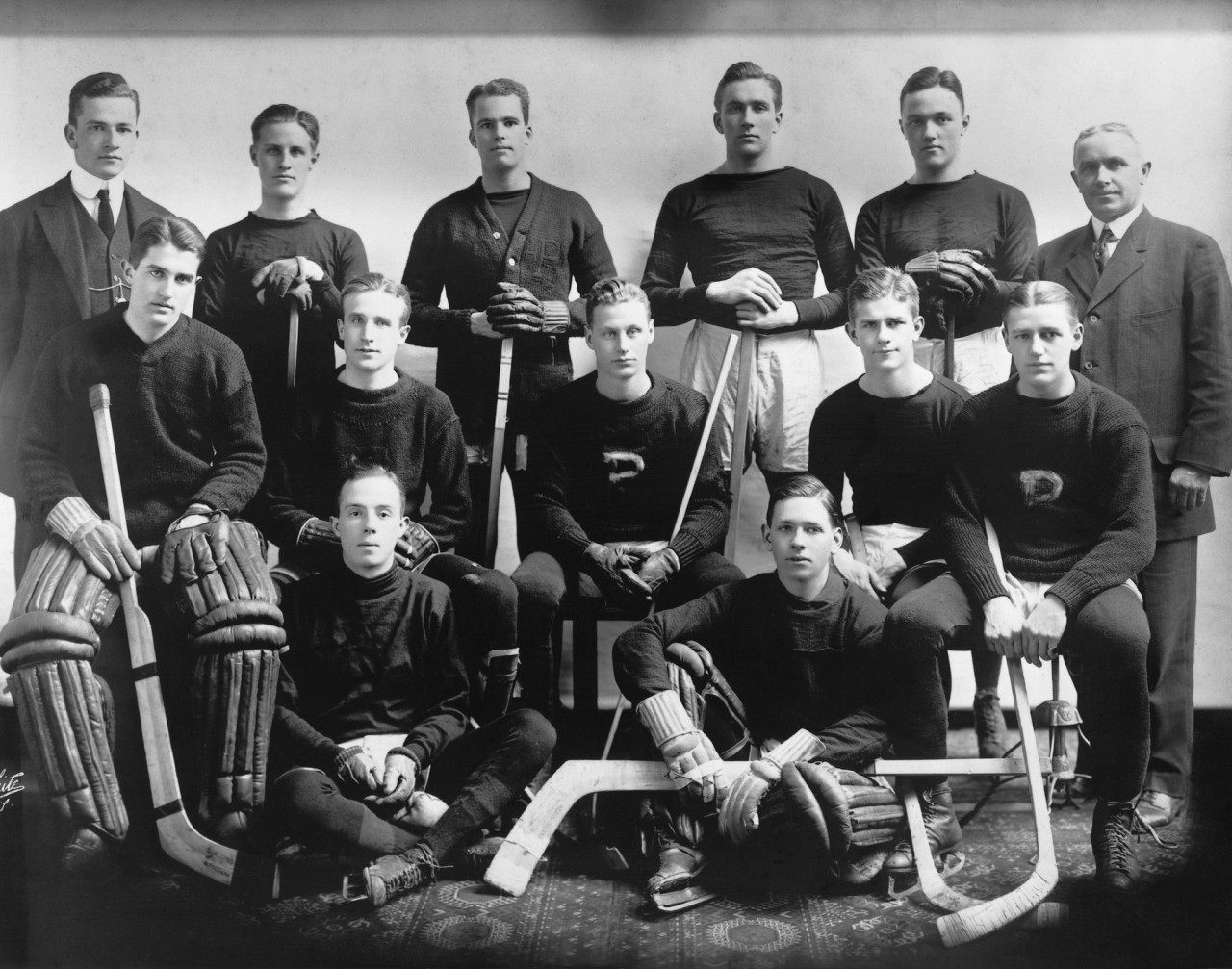 Veterans Day (and Remembrance Day in Canada) was publicly observed today since November 11 is a Saturday this year. Due to this weekend’s two-game road trip, the Penguins will honor military service personnel, past and present, at their next home game, Tuesday, November 14 against Buffalo.

One of the greatest American collegiate hockey players was also a World War I veteran. Sadly in Pittsburgh, the name of Hobey Baker is now probably more synonymous with an infamous, lame-brained attempt at humor by former Penguins television broadcaster Paul Steigerwald, than with excellence in two sports and bravery on the battlefield.

Incidentally, that game (December 21, 2009) was the contest in which Martin Brodeur broke Terry Sawchuk’s 39-year old record for career regular-season shutouts. The Devils goaltender defeated the Penguins 4-0 at Mellon Arena that night for his 104th shutout.

Hobey Baker, America’s first hockey star of the 20th century, demonstrated the courage to defend freedom when he served his country during the latter part of the Great War. While many associate his name with the award given annually to the finest player in American men’s collegiate hockey, Hobey Baker was much more than just an excellent hockey player. Baker starred at Princeton in both football and hockey and captained both Princeton Tigers teams to national championships: the football club in 1911 and the hockey club in 1912 and 1914.

Even before the United States entered World War I, Baker had already taken flying lessons anticipating the call of his country for prepared and trained pilots. In 1917, as a first lieutenant, he went to England then France for advanced military pilot training. Baker became a member of the 103rd Aero Squadron in April of 1918 and was posted to the 4th Army where he was part of a group that was patrolling the lines in northern France.

At the end of the month, Baker participated in a counterattack near Ypres in poor visibility conditions due to mist, low clouds and smoke from exploding shells. Despite a faulty compass that caused him to accidentally separate from his fellow pilots and fly inside German lines, the gritty Baker was able to navigate his way back to safety. The following month, drawing on this experience, Baker went on the attack with a group of five from the 103rd Squadron in Ypres and took on 25 German scouts. Baker shot down one of the planes and was awarded the French “Croix de Guerre” for heroism in combat against the enemy.

By the summer, Baker was promoted to flight commander of the 14th Aero Squadron and began training new pilots. By autumn, his skills and leadership were once again recognized when he was promoted to the rank of captain and in early November, days before the end of the Great War, he led his new squadron into battle and personally shot down two more German planes.

In wartime as in peacetime, Hobey Baker’s exemplary leadership and character were clearly evident. On the ice and on the gridiron, he was known for his sportsmanlike conduct, often giving personal congratulations to the opposing team. As a commander, the pilots under his authority respected, admired and trusted him. He was reliable, unselfish and always willing to deflect credit to his fellow pilots.

Tragically, 40 days after the Armistice was signed, Hobey Baker was killed when a repaired plane he was test flying crashed in Toul, France. He was 26.

Major Charles Biddle, a fellow Princeton graduate and one of Baker’s former commanders had this to say about the deceased pilot: “I have never known a man who was more eager to fly or who tried harder to give to his country the very best that was in him. He fought whenever the opportunity offered and always with the most fearless courage.”

In addition to the Hobey Baker Award, Princeton honored him by naming the school’s arena, the “Hobart Baker Rink”. He was the first American to be inducted into the Hockey Hall of Fame in 1945 and 28 years later became a charter member of the United States Hockey Hall of Fame. In 1975, he was enshrined in the College Football Hall of Fame.