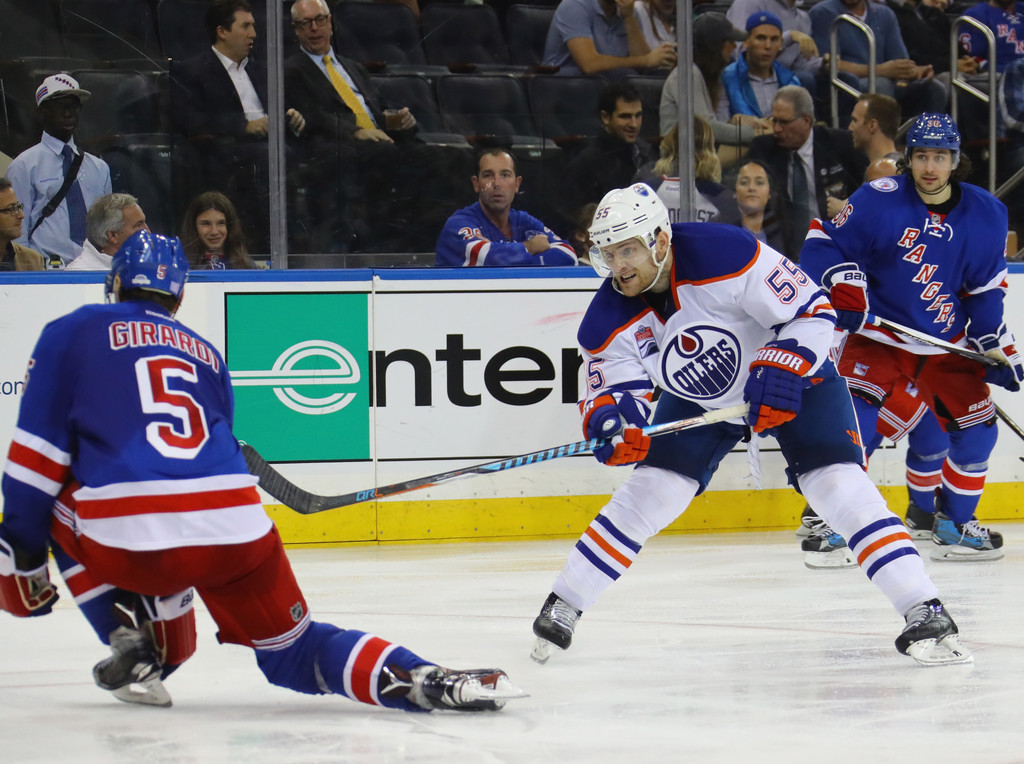 Ah yes, the dreaded afternoon affair for the Edmonton Oilers. After dropping their first two afternoon tilts of the season to Philadelphia and Detroit, the Oilers look to rebound in that department and finally win a day game today. Their task? End the New York Rangers lengthy winning streak.

Both these teams are trying to get back into a groove after tough starts to their season. Edmonton’s won two straight to open this road trip, both in overtime, while the Rangers have won five in a row. This is the first half of a back-to-back set for the Oilers, who will conclude their four game road trip tomorrow in Washington.

Cam Talbot starts for the Oilers, while Henrik Lundqvist gets the nod for the Rangers.

Edmonton: I said this on Thursday night too, but a good start is absolutely vital for the Oilers. In their previous two afternoon games, Edmonton slept through the first period and it ended up costing them points as they surrendered early goals in both contests. The Oilers need to be ready to go in the city that never sleeps. A good start could be the difference today.

New York: The Ranger offense has come alive as of late, and today will get a look at a weak Edmonton defensive group. Cam Talbot has been terrific the last two games, but the Oilers have been bleeding chances against. If the Ranger offense can use their speed to transition the puck today, they’ll have ample opportunity to fill the net.

Edmonton: Jesse Puljujarvi come on down! The 4th overall pick from the 2016 NHL entry draft was recalled yesterday to replace Anton Slepyshev, who was placed on IR after suffering an injury on Thursday night. Puljujarvi struggled a bit during his NHL stint last year and put up pedestrian numbers in the AHL, but the talent is there for the Finnish forward. I’ll be watching his season debut closely.

New York: The big prize in the NHL this summer was Kevin Shattenkirk, and to the surprise of no one he signed with the New York Rangers on July 1. The former St. Louis and Washington defender instantly became New York’s top puck mover on the backend, and has seemingly adjusted quite well. I’m interested to get my first look at him in Broadway Blue today.

Both Drake Caggiula and Anton Slepyshev are expected to miss today’s tilt, so Jesse Puljujarvi will draw into Edmonton’s top-six. This is a big opportunity for the Fin, and I expect him to come out with some serious urgency in this one. Other than that, the Oiler lineup is expected to be the same as Thursday’s winning group.

The Rangers are expected to go with the same group as the one that knocked off Boston on Wednesday night at The Garden. Of note is Boo Nieves centering the club’s fourth line after making the jump from AHL Hartford. Also of note, Pavel Buchnevich has found his stride since these two met last November. He’ll be on the top line today.

Interesting stat from TSN’s Jason Gregor, only five times in NHL history have teams swept a three game road trip through the New York Metropolitan area (NYI, NJD, NYR). Those teams? Los Angeles (2002, 2013, 2015), Nashville (2006) and Anaheim (2008). The Oilers can be number six with a win this afternoon.

Cam Talbot returns to New York for just his second start against his former team today. Edmonton’s goaltender started his career with the Ranger organization, making his way from the ECHL all the way to the top of the food chain. Talbot played in parts of two seasons for the big club before being traded to Edmonton on draft weekend in 2015.

The Oilers afternoon woes, especially in period one, unfortunately continue today. The Oil sleepwalk through the opening twenty minutes and it ends up costing them the game, snapping their modest two game winning streak and halting them one game short of history in New York.

The Rangers take this one 4-2 behind goals from Hayes, Vesey, Staal and Nieves, while the Oilers get tallies from Letestu and Maroon.

Regardless of my prediction, the Oilers could use this game this afternoon. They need their first winning streak of the season badly, and a win today would officially mean a successful road trip for the orange and blue. The Oil escaped with overtime wins in their first two games of this trip, and badly need to get back into a groove to get this season on track. We talked about needing a winning streak, and Edmonton can get just that this afternoon.

It’s like that old song, we’re back….back in the New York Groove, right?