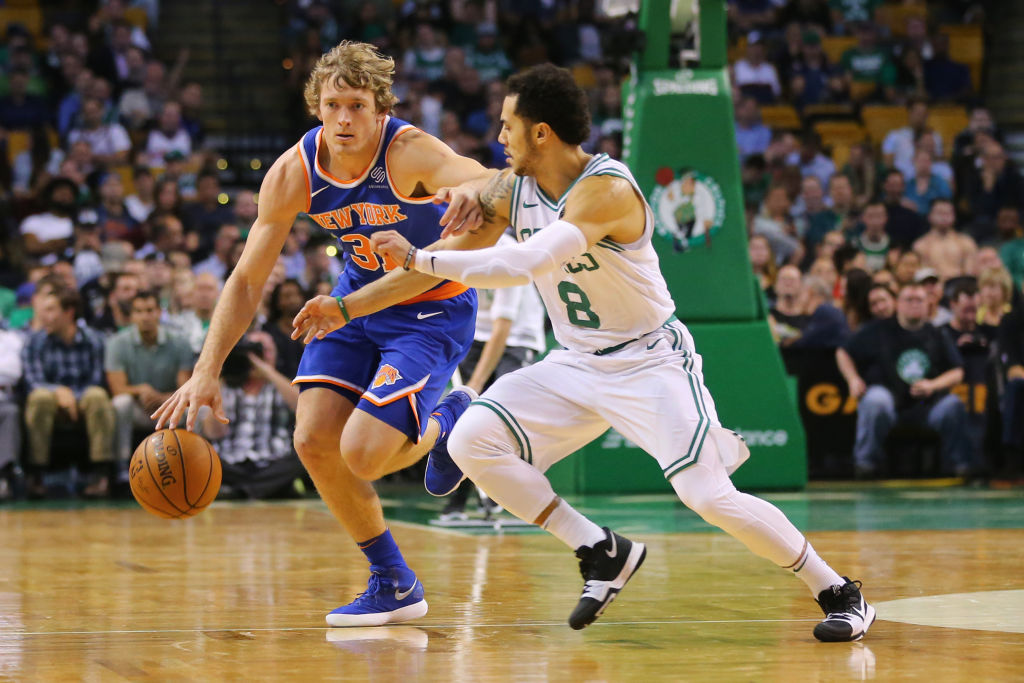 After playing their first three games on the road, the Westchester Knicks kicked off their season at the Westchester County Center on Friday. The team welcomed another 3-0 team, the Grand Rapids Drive, into town. With two teams seeking their fourth victory of the season, it was set to be an intense battle.

Shortly before the game, the New York Knicks announced Ron Baker and Damyean Dotson would suit up for the Dub Knicks. Baker has dealt with an ankle injury, not appearing in a game since October 24 against the Boston Celtics. Dotson hasn’t seen much action early on in the season, either. The Houston product has played in six of the team’s 11 games, averaging 6.5 minutes per contest. For both, this was an opportunity to get increased playing time while working on their game.

“I thought our defensive energy was great,” Miller said. “We played pretty well in the third quarter. I felt like both of the guys played a lot of minutes. That’s the idea and they get in and get the opportunity to play. They were both solid. They were really good defensively. Damyean had 12 rebounds, so he was very active. A few of those shots were pretty good shots for him and didn’t go in. I think that’s part of him getting his rhythm and get extended minutes like that.”

For Westchester, things were clicking on both ends. After three quarters of play, the minor league affiliate held a 20 point lead over Grand Rapids. The Knicks looked different in the final quarter, struggling offensively and tallying just 13 points

The Drive started out the final frame on a 11-2 run and began trimming their deficit. Zeke Upshaw drained all of his three-pointers in the fourth quarter and hit those shots at a crucial point in the game.

“Honestly our offense led to that bad defense,” Isaiah Hicks stated. “We just standing around just not passing not moving. Just come down the court like Coach [Miller] was talking about one shot after one pass or something. Defense get down. I think [Zeke Upshaw] hit two threes in transition. That kind of got them going and that run even more. I would say our offense led to bad defense.”

Westchester had an opportunity to win the game in the final moments of the game. Hicks drained a huge three off a pass from Trey Burke, which tied the score at 95 with seven seconds left in the game. Landry Nnoko tipped the ball in, which turned out to be the game winning shot for Grand Rapids.

“We won every quarter,” Miller said. “And for the most part, we’re trying to play the way that we wanted to play and we got to the fourth quarter and I thought we did a good job defending them around the floor with their shooters. They hit timely shots. I thought we got off a little bit from really working together and they got into us more defensively, in terms of denying some things and we didn’t really counter. We played against a loaded defense a lot, instead of moving it and swinging it and trying to do something on the other side. It made it very difficult and didn’t generate any offense and we didn’t really make any changes in terms of how we were playing. We were trying to run a few sets and there wasn’t anything that was really efficient with what we were doing.”

After giving up 35 points in the fourth quarter, Hicks believes the team needs to work on trusting each other more.

“I would say just working together more and trusting each other more, especially at times, you can tell when we’re all in the same rotation, all doing everything at the same speed, then we’re a good team. It’s just the other times when we just have the lapses and that’s what really messes us up.”

Hicks recorded his third double-double of the season in the loss. He finished the game with 35 points and 10 rebounds. Two-way player Luke Kornet finished with 10 points and five rebounds.