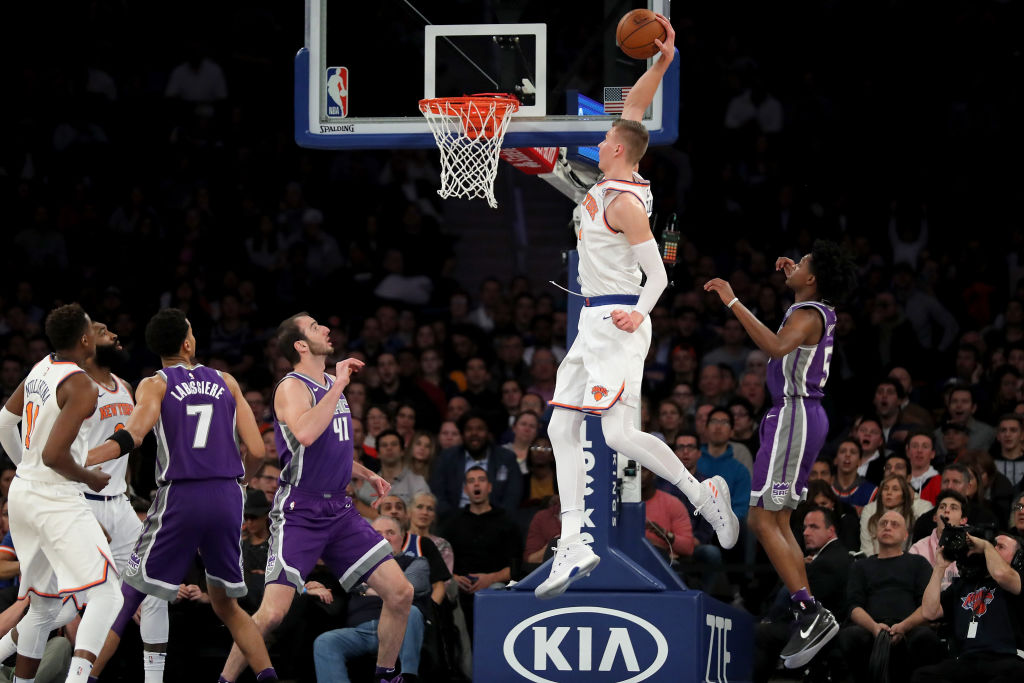 It’s become the norm for the Knicks to expect scoring explosions from Kristaps Porzingis: a certain offensive dominance in which tallying 30+ points comes rather effortlessly.

Following their loss to the Magic earlier in the week, New York came to understand the kind of void the big man’s absence creates. On the flip side, that’s how easily obtaining a victory became upon his return from a knee injury Saturday against the Kings.

With Porzingis leading the way, the Knicks are beating the teams they should be expected to beat. Sacramento was no match for the 22 year old, as a slew of opposing front court opponents were thrown at him, only to no avail. A committee of Willie Cauley-Stein, Kosta Koufas, and Skal Labissiere certainly wasn’t quick enough to close out on him across the perimeter. Porzingis’ 7’3″ frame also made it easy for him to post up and shoot fadeaway jumpers down in the low post as well. The best chance the Kings had at attempting to slow him down was to foul him. As fate would have it, Porzingis made the defense pay, converting on 8 of 9 from the charity stripe. Needless to say, he responds to what the defense is giving him, and subsequently has his way with it on a nightly basis. Saturday was no different, with Porzingis tallying 34 points by the end of the third quarter.

Despite his continued dominance, it makes sense that a defense is going to try and contain Porzingis the best way it can. As the Kings threw everything but the kitchen sink at him, New York’s other players went on to space the floor and wait on the wings to cash in on easy scoring opportunities. Courtney Lee proved to be an underrated (and arguably unexpected) benefactor, converting on five shots from deep on his way to scoring 20 points. The Knicks found their groove, bouncing back from a 10-0 deficit to start the game. They finished with 29 assists on just 11 turnovers.

One of the biggest differences between this season’s Knicks and the teams of yesteryear is that this group heads into the fourth quarter ready to fight. Even if they happen to trail, the faith is there that New York can mount a late game comeback and that all is not lost. That’s becoming part of this new look team’s DNA. Luckily enough, this contest was different in a positive way. The Knicks were not met with pressure, nor did they need any late game heroics. Instead, the overwhelming lead gave Coach Jeff Hornacek the luxury of resting his starters throughout the last period. Admittedly, the extra time to regroup will aid the Knicks’ efforts as they prepare to take on the Cavaliers in a more daunting battle on Monday.

Nevertheless, “garbage time” provided Damyean Dotson the chance to continue his development and understand what it means to be featured on offense a bit. The rookie added 14 points, complemented by Michael Beasley’s 10 points. The veteran forward played a season-high 21 minutes. Willy Hernangomez’s 9 minutes were his most played since November 1st.