Report: New York Mets Are Looking at Corner Outfielders Who Can Play First Base 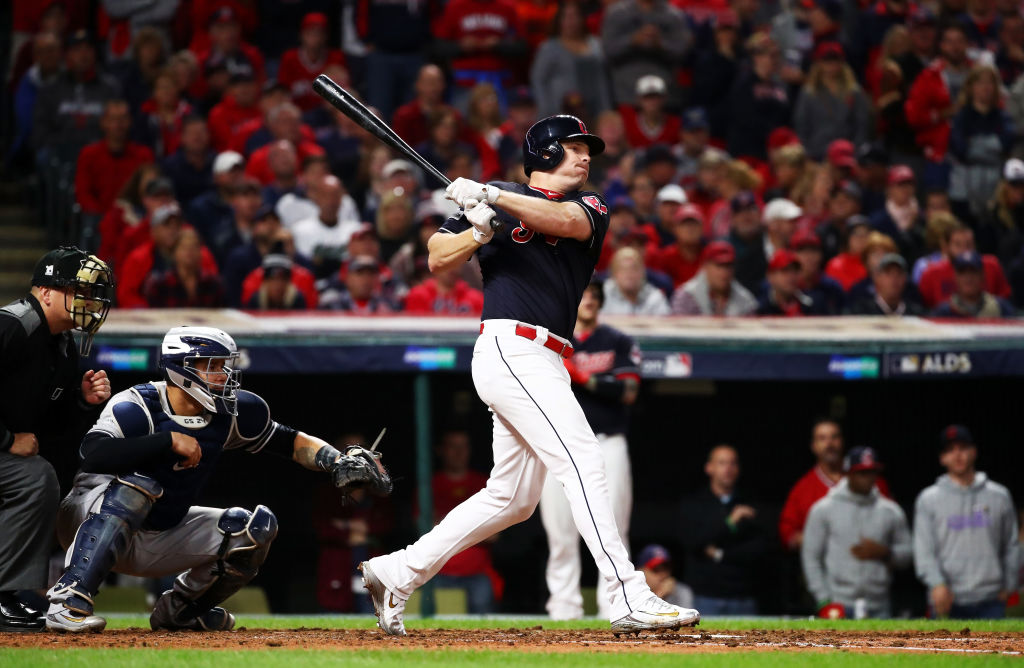 Report: New York Mets Are Looking at Corner Outfielders Who Can Play First Base

The New York Mets need a lot of help this winter, and one area of particular need is in the outfield. While most of the Mets’ fans would like them to pursue center fielder Lorenzo Cain in free agency, but the team appears to be heading in a different direction. The Mets are reportedly focused on power hitting corner outfielders with the ability to also play first base, Mike Puma of the New York Post reports. In this scenario, Michael Conforto would be the Mets’ full time center fielder while the new addition would be the primary right fielder.

CLEVELAND, OH – OCTOBER 11: Jay Bruce #32 of the Cleveland Indians hits a single in the fifth inning against the New York Yankees in Game Five of the American League Divisional Series at Progressive Field on October 11, 2017 in Cleveland, Ohio. (Photo by Gregory Shamus/Getty Images)

Puma lists three potential players to watch as fits for the Mets: Jay Bruce, Logan Morrison, and Adam Lind. Bruce makes a lot of sense for the Mets since they know he can play in New York, but he doesn’t have a ton of experience at first base. The market should also be hot for Bruce, who hit .254 with 36 home runs and 101 RBI’s between the Mets and Cleveland Indians last season. Bruce is reportedly seeking a five year deal worth as much as $80 or $90 million, ESPN’s Jerry Crasnick reports, so that asking price might be out of the Mets’ price range. If the market comes back to the Mets and Bruce doesn’t have a home later in the offseason, it’s possible the two sides could link up on a three or four year deal. Bruce probably doesn’t want to come back, with reports circulating that he would prefer to sign with a team in Texas or California.

The other two options, Morrison and Lind, are a bit more interesting. Each player is primarily a first baseman with a bit of experience in the corner outfield, so there would be a learning curve if either came to the Mets. Morrison is coming off a breakout season in Tampa Bay, where he batted .246 with a career high 38 home runs and 85 RBI’s, so he should be looking to cash in with a multi-year contract. Lind was a part time player for the Washington Nationals but he was highly productive, batting .303 with 14 home runs and 59 RBI’s. The Mets would probably look at Lind as more of a fall back option since he would probably come cheaper.

The fact that the Mets are looking at guys who can also play first base indicates their confidence is at least shaken a bit in Dominic Smith. Smith had a stellar year in the minor leagues, batting .330 with 16 home runs and 76 RBI”s in Triple-A, but he struggled to adjust to the major leagues. The Mets also had to be concerned about Smith’s defense, which is reportedly excellent but was poor at the big league level. Signing any of these players gives the Mets an insurance policy in case Smith isn’t ready for full time duty in 2018, something the club will have to try and suss out during spring training.