Depth Chart Diving: Indians Have Options, But Decisions to Make at Catcher 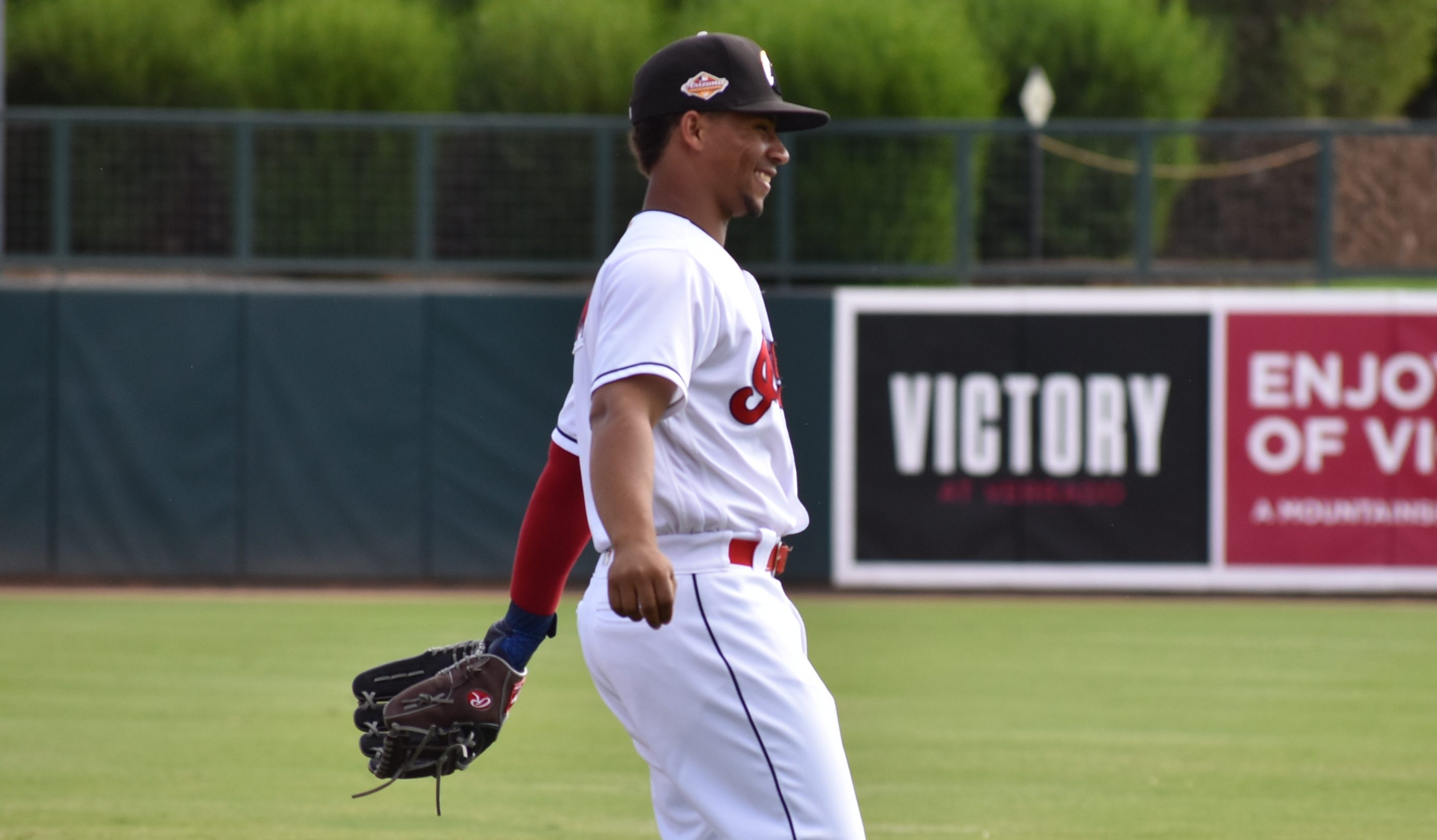 Depth Chart Diving: Indians Have Options, But Decisions to Make at Catcher

As recently as 2012, the Cleveland Indians catching depth consisted of hoping that Carlos Santana would improve as a defender behind the plate and stay healthy. The only other names that were sure to get major league time at catcher were Santana, Lou Marson and the backstop.

Fast forward to the end of 2017, Santana is likely departing the Indians organization after a season in which he should have won the Gold Glove at first base, the Indians acquired Yan Gomes from outside of the organization and he was nominated for a Gold Glove in 2017 and then Roberto Perez was developed in the system and an even better defender than Gomes.

Last week, the Indians added 2011 7th round pick, catcher Eric Haase, to their 40 man roster to join Gomes, Perez and top prospect Francisco Mejia, giving them four catcher on their 40 man roster and their best depth there in recent memory. They moved on from Tony Wolters prematurely after converting him to catcher and names like Chun Chen and Jake Lowery among others that were at one time considered future catching prospects.

Given that the Indians have team control over both of those catcher, who are considered good to great defenders through 2021 and 2022 respectively and their age 33 seasons, you would think they are set at catcher for a while.

But Mejia and Haase give the Indians an embarrassment of riches of sorts. While it doesn’t appear that Gomes will ever regain his 2014 Silver Slugger offensive levels, 2017 was a decent offensive year for him. Perez has shown he is prone to slumps at times although it’s fair to note he was pressed back into action from thumb surgery last year too early with Gomes’ injuries and Perez didn’t receive much playing time in the first half and looked better with more regular at bats in the second half. Both Mejia and Haase might be a little more ‘offense first’ type backstops.

When Mejia made his full season affiliate debut in 2015 at age 19, it was thought that his defensive abilities were ahead of the bat. With a 99 wRC+ mark in 109 games that year, Mejia more than held his own with the bat and threw out 34% of runners on 93 attempts. Of course he had the 50 game hit streak at age 20 that started in Lake County where he was already 2.5 years younger than the average age of his peers in the Midwest League and it ended in High-A Lynchburg where he was also 2.5 years younger than the average age of the Carolina League. His 160 wRC+ mark in Lake County, 140 in Lynchburg and 127 as a 21 year old in Double-A in the Eastern League (3.2 years younger than the average age) show that the bat has caught up to the defensive skills and even surpassed them. He threw out 30% of runners and Clay Davenport’s DRS had him at +2 after being +8 a year ago.

All reports suggest Mejia improved his English in order to communicate with pitchers better and take better command as a receiver and game caller. He only had seven passed balls, compared to 16 in 2015.

The one question about Mejia offensively that still is being raised is his low walk totals. He has 113 in 1,659 minor league plate appearances (6.8%). He only has 259 strikeouts (15.6%)in that time, so he makes a lot of contact. Whether or not he will continue to make that much contact and enough good contact, at the Major League, is the only question he probably needs to answer offensively. His aggressive approach likely means that his OBP is tied to his batting average, which means he may rely on running high BABIPs for his hit tool to play at the MLB. While Mejia makes a good amount of hard contact, he does run a bit higher of a ground ball rate than his fly ball rate, although he does carry a solid line drive rate. He’s shown a solidly balanced approach in terms of his spray chart in his minor league career, so hopefully shifting won’t be a problem in terms of how it would affect his BABIP. Finally with Mejia, he hasn’t shown an exceptional amount of game power, but has some pop. Though, if the juiced ball continues to be a thing at the major league level, Mejia certainly has 20+ home run upside.

As for Haase, I previously wrote about his change in approach as a launch angle revolutionary allowing himself to tap into his raw power better. Haase’s profile when drafted was that he was a solid defensive catcher with decent pop and some patience. None of that has changed except for his approach at the plate that allows him to take advantage of that pop. Overall defensively, Haase is ahead as a receiver, blocker (four passed balls) and in controlling the run game (38% runners thrown out). Even though Mejia possesses the better arm,  Haase’s mechanics and footwork are superior, which allows his arm to play more above average than it is, which makes his value as a plus defensive catcher with power and patience extremely enticing.

More fly balls for Haase was a good thing for his power, where he hit 19 homers at cavernous Canal Park. With the MLB juiced ball, Haase could easily come close to 30 homers with his power. His strikeout rate however, is the only thing that he needs to address. There aren’t many examples of players who struck out 30% of the time in Double-A like Haase did and moved up the majors to manage that strikeout rate, much less drop it. Joey Gallo is the only true recent example of a hitter who struck out at that rate in the minors and is managing to contribute positively offensively in the majors. While Haase’s power is good, it is nowhere near the level of Gallo’s so a 30% strikeout rate won’t hold up for Haase at the MLB level and he’ll have to find a way to cut down a bit. It might be more manageable in a part time role.

The part time role is where things get interesting. Haase would at the worst be an interesting backup catching option given his power, defensive presence and that he embodies everything the Indians normally want in a catcher, in that he puts defense first.

With Mejia playing some third base in the AFL, the Indians are likely trying to find options to get Mejia’s bat up to the big leagues but it also could be a way to clear a spot for Haase, who is strictly a catcher. But what does this mean for Perez and Gomes? Given their young ages and the ages and status of Mejia and Haase in terms of talent, level and ages, they are ready for a big league spot soon. Both Gomes and Perez are owed a decent amount of guaranteed money so that complicates things a bit. How they handle those four spots this offseason and going into Spring Training will be an interesting situation to see play out.

Below those four, it’s hard to guess at moment who would be the next catcher in the system to be added to the 40 man roster. Logan Ice was a good defensive catcher in college who didn’t hit much until the year the Indians drafted him. Ice threw out 25% of runners and did post a .320 OBO. He’s only in Low-A and while some feel his defense will earn him big league time someday, there’s no real hope about his offense being worthy of regular playing time yet. Li-Jen Chu put up solid offensive numbers in Lake County but was 22 doing it and played catcher just half the time. It might be too soon to write him off but he doesn’t project defensively to be a catcher long term and there’s no real proof he will have true offensive upside as he moves up. Chu threw out just 18% of runners and has already had elbow issues.

Michael Rivera was the Indians 6th round pick last year, considered a strong defender with leadership qualities the Indians like from their catchers. He threw out 7-of-14 base stealers last year but didn’t offer much with the bat and wasn’t considered a strong offensive contributor in college. Rivera and Ice are probably two catchers that fit the Indians mold with strong defense that looks good in a backup catcher but don’t project to do much offensively.

So while the current four on the 40 man complicates things a bit after 2018 or so, it’s a better situation than they’ve had in past years and it’s better depth as what sits below those four hasn’t delivered or promised much yet, so how they decide on how those four fit into the team’s future will affect their depth for years to come potentially.