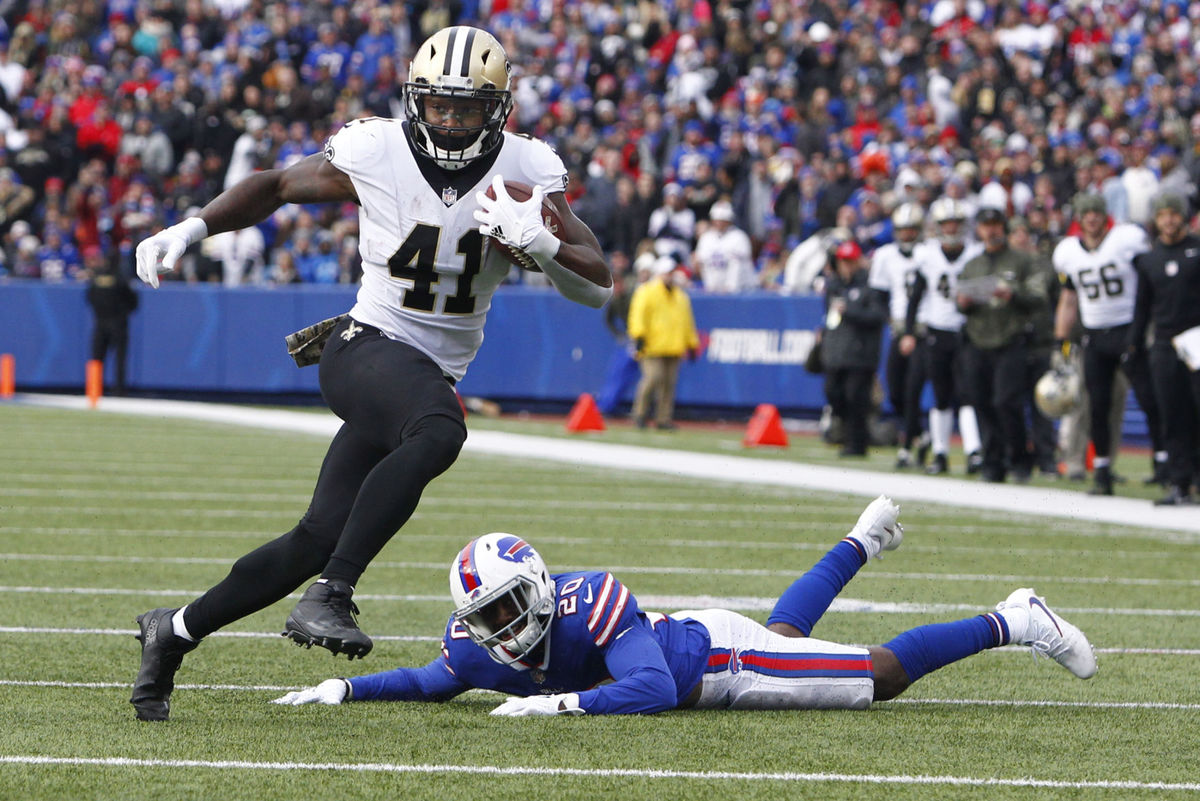 If I told you at the beginning of the season that there would be a game where the Saints had Drew Brees pass for less than 200 yards with zero touchdowns you would probably tell me the Saints got blown out in the game. The EXACT opposite happened in this game. don’t let the stat sheet fool you, Drew Brees had a great game, but the Saints had an absolutely dominant performance on the ground against the Bills on Sunday. How dominant you ask? The Bills were a top 10 unit against the run going into the game…they’re now worse than 20th.

On to the grades.

Sometimes grades have nothing to do with stats and everything to do with execution against expectation. The Bills defense was getting absolutely thrashed on the ground for large parts of this game, and because of that the Saints had no need to ignite the passing game. When it was needed Brees was able to move the chains through the air, and he added a rushing touchdown to finish off one of the most dominating drives you will see all year (94 yards, zero pass attempts, touchdown…nuff said). Drew executed brilliantly down the stretch, his mechanics for handing the ball off to Ingram and Kamara were spot on, and joking aside he had some great ball placement to a few key throws to Michael Thomas through the early parts of the game. Drew wasn’t the MVP on the day, but there just wasn’t anything I’d dock him for. Great ‘Alex Smith’ game.

To let my nerd card out for a moment, in many games that have ranking systems there is a class beyond A where the best of the best can be found (difficulty level, ranking, it varies game to game) and the Saints offensive line can only be defined as the Super S class in this game. They road graded the Buffalo Bills. How bad was it? The Saints ran 24, thats TWENTY-FOUR consecutive running plays during a point in the game. The Saints rushed for 301 yards (I’m not counting the final kneeldown), and while the backs were great, the offensive line was definitely the key to success. The play of the game was on Drew’s touchdown run when left tackle Terron Armstead tossed a Bills defender (who shall remain nameless to spare him the shaming) like he was a small child. The play was a perfect encapsulation of the Saints performance along the offensive line throughout the day.

Michael Thomas looked like a #1 receiver on Sunday. Not just by getting open, but by producing and carrying the offense at times. Thomas made tough catches in traffic and worked his way through the Bills secondary to the tune of 117 yards. That was more than enough for what the Saints needed on the day. Brandon Coleman made a play and had his usual blocking, Willie Snead was an able and willing blocker, and much like the quarterback position I’m grading the group much more on what was asked of them than what they did in the stat sheet. The Saints wide receivers were an integral part of the rushing attack with their blocking, but when called upon they produced.

Another week, another average performance, and another C. This isn’t in anyway an attack on the Saints tight ends, they have C level talent at the position and that’s the production they’re getting. These guys are doing what is asked of them week in and week out (blocking mostly), but part of the position is to provide a receiving element and they aren’t producing in that regard. That is the only reason the grades are low, not because of expectations, but positional requirements.

The running back group deserves to exceed the ‘A’ class as well, just one less S than the offensive line though. Anytime you have TWO rushers over 100 yards (the ONLY two backs to accomplish that on Sunday) with 5 touchdowns in the group, you get a high grade. The Saints running back group has been on fire the last few weeks, and they continued to produce at a very high level on Sunday. Mark Ingram ran with fury and force as he rumbled through the Bills secondary and bounced off would be tacklers. Alvin Kamara showed the toughness, balance, and vision that is putting him in contention for offensive rookie of the year throughout. He is quickly becoming a major component of the Saints offense, and the duo between him and Mark has been really fun to watch. Trey Edmunds gets bonus points for putting the Dagger in the Bills with his 41 yard TD run to finish off the game.