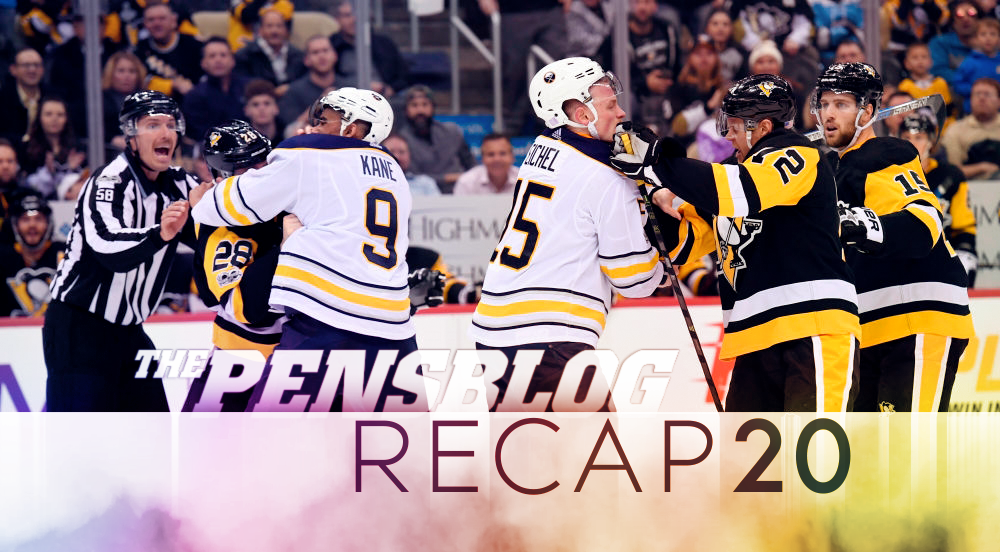 There’s nothing quite like a win against the goddamn Buffalo Sabres to bring the Penguins extremists away from their 40-story suicide pact plummet.  That ledge was beginning to get pretty intimidating.

It’s a good thing the Sabres are a fucking nightmare, too, because Fleury jersey sales would’ve taken a massive hit after last night.

It should come as no surprise either that the Sabres are horrid.  First of all, their home is in America’s asshole.  Take a minute and try to find a worse city in this country than Buffalo.  If that’s not enough, they gave playing, coaching, and general managing responsibilities to a 21 year old ginger.   No matter how much they claim that Boston education is superior to everything and everyone else, you can’t alter your DNA, kid.  The Sabres like that kid that left college after one year and thinks they’re better and smarter than everyone else because they started a construction company or some shit.

And, for as bad as Buffalo is, it didn’t help that they had to travel to Pittsburgh to face a Penguins team that just does not lose in regulation at home.  But they had 3 separate leads last night, including two different 2 goal leads.  Despite being heavily out-shot, they still had more than enough chances to put the Penguins away.  But Buffalo just wasn’t able to finish them off.  This was largely due to Murr’s solid performance, but also partially due to the best finisher in Buffalo still being Patrick Kane (though even that gets called into question).

All things equal, Buffalo were all about letting the Pens back into the game.  They gave them 5 PP opportunities on the night, including a 5v3 midway through the 2nd frame when it was just 3-2 as well as forcing Robin Lehner to make 40 saves.  Two, in particular, were inhumane and could’ve been considered acts of war, keeping Hagelin from ever scoring another NHL goal again when it was 3-3 and preventing Rust from scoring the GWG at 4-4, late in the 3rd, on a save you’ll see in some end of season countdown.

[Doctor’s Note: Dr. Bob Errey exclaimed that Lehner dislocated his groin on the save, whatever the fuck that means.]

This about sums it up.  The Buffaslugs opened the scoring just under 4 minutes into the game somehow.  Phil gets caught in possession by Sam Reinhart along the boards before getting tackled by Josh Gorges.  Cole pinched to try to keep the play alive, but Reinhart was able to chip the puck over his stick to Kane and Eichel exiting the zone with some speed.  Reinhart would pay for this with his life shortly thereafter.  Schultz somewhat did what he as supposed to do and take away the pass, but he looked more like Rob Scuderi than a competent NHL d-man on the play, allowing Eichel to dangle away and thread a pass to Kane under Jultz twig and leave Murray with limited chance.

This megahit would end up putting the Pens on the PP because Eichel jumped in to almost try to fight Cole for some reason.  Malkin would end the powerplay towards the end of it by tripping up O’Reilly to eventually put the Sabres on their first of 3 powerplays of the night.  Once again, the Pens Dick Defense on the PP did not prevail.

With Rust and Kuhnhackl stacked and Maatta just off the post, there was a shooting lane available for Scandella to crank one off the end boards and get a bounce.  Get a bounce he did as Zombie Reinhart was able to elude Maatta and Ruhwedel to bang home the loose puck.

Despite the Pens playing a sloppier than my freshman year of college, there was one big dick playa who was always going to scrap something together out of nothing and look like he’d give the Penguins some life heading into the first intermission: Patric mafukkin Hornqvist.  In what was surely the first race Riley Sheahan has ever won in his life, he was able to beat Fedun to the wall and make Lehner look stupid playing the puck behind the net, popping it out to Horny to just bank in off O’Reilly to cut the lead in half.  Give Sheahan his 100th point in his 303rd career game.  Is that good?

All of that joy and excitement about the Pens maybe changing their fortunes with a late period goal was dashed before half of PPG could get back to their seats with their IC Lights.  Dumoulin and Letang both did a nice job to win a battle along the boards vs. Reinchel.  Kane was lurking on Crosby as 58 worked it to 87 and instead of chipping it by him, Crosby decided to reverse it back to where it just came from and really fuck Murray without even taking him out to a nice seafood beforehand.

But that, dear readers, is where the Penguins didn’t falter and go into a shell.  Over the next 4 minutes, the Penguins slammed the shit out of Buffalo, registering 8 attempted shots to the Sabres’ feeble 1.  On the 8th, it was Sheary cutting the lead to 1 once again.  May have been the only controlled breakout the Pens had and they really made them pay.  Unreal stretch pass up the boards from Maatta to put it in a position where only Hornqvist could receive it.  Only way Pominville was getting to it was to take a penalty, so he instead let Horny torch him and Gorges at the same time for a 2v0 with Shares.

Nothing doing on the exchange of PPs between goals, but with Baptiste in the box for a new slash on Rust, it was all the Pens needed.  A blocked bomb from Jultz collapsed the Sabres PK enough for him to feed the beast to walk in and almost bury a goal of his own.  It got through the traffic and Lehner and was just begging for a tap tap taperoo.  Crosby obliged, making up for his blunder on the Eichel goal and bust out of his slump, netting his first in 12 games.

But in the dying seconds of the period, they’d cough blood up on their sacs with Reaves in the box for elbowing Okposo in the face.  They looked like they were fine with 3 bodies committed to the strong side.  Sheahan had the puck and had Cole coming over to help him out.  Then, Sheahan, hoping to get his 101st point, jammed it back down low to Reinhart.  Benoit  (balls) Pouliot walked away from Sheahan to take the feed and go backhand shelf before anyone chose to react.

Everything went quiet for a stretch at the beginning of the 3rd before the Pens started owning all of the puck.  Bad at sharing, these lads.  Coming on the heels of a huge Murr save on a Kane/Eichel 2v1, the Hagelin-Malkin-Phil! line stormed down the ice for Gene and Phil to put on a clinic.  Malkin weaving into the slot opened up the 1T for Phil.  Blocked, but he was able to corral it and hit G moonwalking out from behind the net and hitting Phil again for another one timer.

Legitimately, you just will not see a better pass than that this year.  In the air the entire way across the ice until it was on Phil’s stick.  Spank bank worthy shit here.

Lehner was the difference in sending it to overtime, but bad teams are not stopping the Pens in any 3v3 situation.  They needed just one SOG and one instance of Crosby clowning an entire organization, making EKane look like a chump in his office and finding Sheary all alone because Jack Eichel doesn’t defend, apparently.  He literally looks at Sheary twice before Crosby even passes the puck, then doesn’t really even react until the game was over.

Pens travel to see Matt Duchene and the Senators on Thursday night.  LGP.