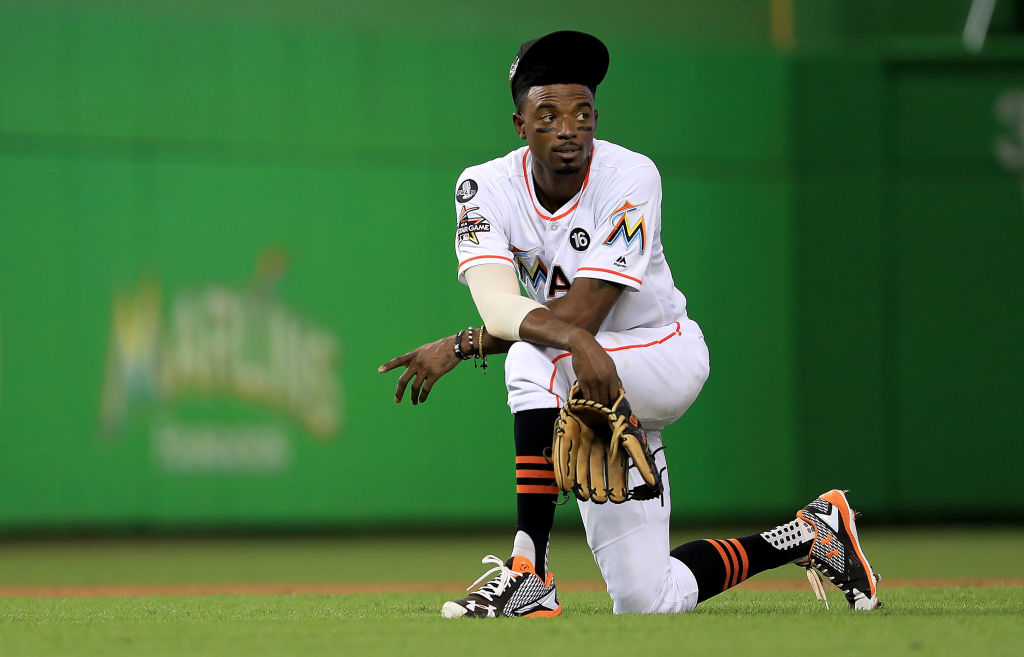 The Mets are going to be busy this winter, and they have a lot of need areas to address. The team filled one by picking up Asdrubal Cabrera’s option for 2018, making him the primary backup plan for David Wright at third base. If Wright is actually able to stay on the field this season, Cabrera could play second base, but the Mets wisely won’t count on that happening. This means that the Mets are in the market for a second baseman, and early reports indicate that the team is also exploring backup plans for first as well.

during a game at Marlins Park on October 1, 2017 in Miami, Florida.

The good news for the Mets is that they should have a lot of options to fill second base externally. The free agent market features former Met Neil Walker and utility man Eduardo Nunez, who would offer some speed and defense to the roster. The trade market could be even more robust, as several teams are shopping quality second basemen. The Miami Marlins are widely expected to dump Dee Gordon in their upcoming fire sale, while the Cleveland Indians could look to move former All Star Jason Kipnis to clear a log jam in their middle infield. The Minnesota Twins are reportedly listening to offers for All Star Brian Dozier, whose contract expires after the 2018 season. Ian Kinsler is also available from the Detroit Tigers, who have begun a rebuilding project, for the same reason as Dozier.

Trading for a second baseman might be the Mets’ preferred route, but General Manager Sandy Alderson will need to get creative to complete a deal. The Mets don’t have a ton of upper level prospects to complete trades, which are usually the most enticing pieces to offer in offseason trades. Amed Rosario is virtually untouchable and Dominic Smith is likely safe as well despite some struggles transitioning to the major leagues. The Mets’ best prospects are in the lower levels of the minor leagues, which should help in a few years but doesn’t provide much value to teams looking to improve their rosters now. The team does have big leaguers it could move to try and facilitate deals, but most of them have values at an all time low (Steven Matz, Zack Wheeler, Matt Harvey) or are pieces Alderson doesn’t want to move (Jacob deGrom, Noah Syndergaard, Juan Lagares).

Joel Sherman of the New York Post proposed a trade of Robert Gsellman and prospect Luis Guillorme to the Indians for Kipnis, a deal that makes sense for both sides. The Indians would kick in some money on the trade to entice the Mets to part with Gsellman, who has potential to be a big league starter but took a step back in 2017 and pissed off some in the organization due to his sense of entitlement. The best fit for the Mets would be Gordon, whose speed and defensive skills could really help this roster. Gordon would also give the Mets a natural leadoff hitter, but they remain unlikely to assume his entire contract in a trade. Miami would also probably ask for a lot to send Gordon to a division rival, so this deal appears unlikely at the moment.

The more intriguing situation is at first base, where many industry insiders believe that the Mets are looking for insurance policies. This would be an indictment on Smith, who is a highly touted prospect but struggled massively upon his promotion to the big leagues. Smith has been highly regarded for his excellent defensive skills, but he looked surprisingly poor in the field after his call up. There have also been tons of questions about Smith’s conditioning, with many scouts worried that he won’t be able to maintain a proper playing weight going forward. Smith’s poor play has apparently led the Mets to look for corner outfielders who can also play first, such as Jay Bruce and Logan Morrison. The Mets haven’t yet considered guys who can play third and first, such as former Yankee Todd Frazier, but they remain realistic possibilities as well. Smith will need a strong spring to keep the starting job at first, but even if he does the Mets appear committed to platooning Smith to protect him against left handed pitching. Wilmer Flores would appear to be in line for at bats at first in that scenario, and the Mets could also consider handing Wright a first base mitt in camp in order to try and keep him healthier.