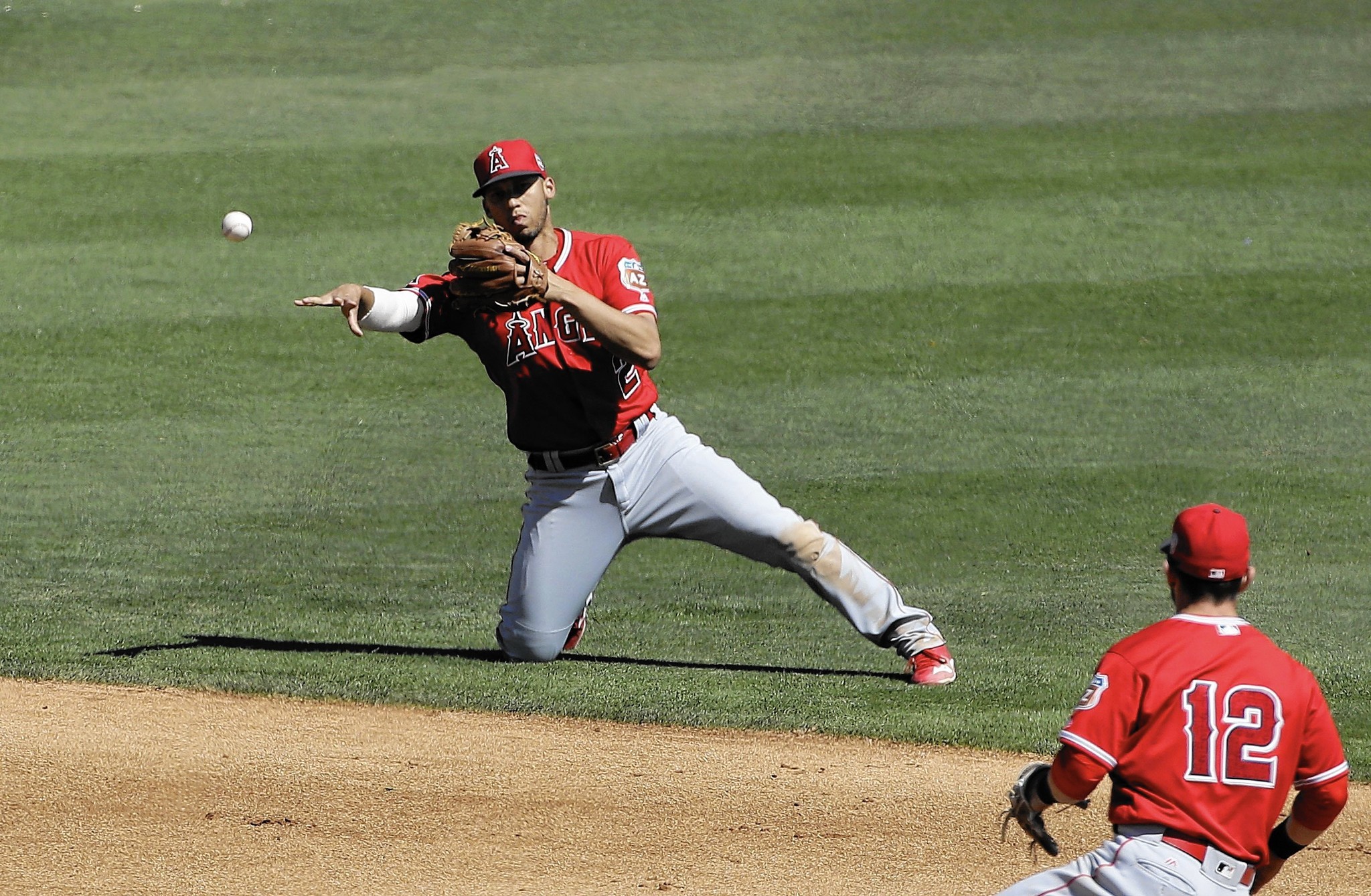 The Angels enter the 2017-2018 off-season with a surefire superstar at one up-the-middle position and a potential black hole at the other.

In regards to the former Billy Eppler took care of that need nearly two years ago and it has quite possibly been the best decision in his brief tenure as General Manager of the Angels.

However a good fix to the latter has proven elusive and, although there are internal options to fill the position, the question Billy must ask himself is, are they the best solutions available?

One thing that every General Manager loves to get is steady, consistent performance out of every position, day-in and day-out. Of course the Angels are lucky to have Mike Trout, who is, currently, the best example of that type of player, but they are also very fortunate to have 2017 Gold Glove and Fielding Bible Award winning shortstop Andrelton Simmons in the fold as well.

The trade of Andrelton “Simba” Simmons and Jose Briceno for Sean Newcomb, Chris Ellis, and Erick Aybar has yet to fully play out in terms of who “won the trade”. That will only be determined when each of the respective players have served their time with each organization and that could take years to fully resolve itself. However it is easy to say that the Angels are probably out to an early lead in that discussion.

Simmons has been nothing short of spectacular. Known for his superlative defense, he continues to show his incredible range, quickness, arm, and instincts on a daily basis. More importantly Andrelton’s body frame has matured incrementally and now he is a threat not only defensively but offensively as well, sporting a nifty 104 weighted runs created plus (wRC+) in 2017 that appears to be sustainable moving forward.

Beyond Andrelton’s excellent play on the field, his work ethic and commitment to excellence is unsurpassed, resulting in the type of mental fortitude you find among some of the greatest players in baseball. His in-game awareness is second-to-none and it is just one more layer of value he brings to the team that sets him apart from other, lesser, players.

The Angels have contractual control of Simba for the next three seasons (2018-2020) on a very team-friendly contract with an Average Annual Value (AAV) of just under $8.3M per year. More importantly this aligns perfectly with the Mike Trout window of contention, adding to a great core of players the front office can use to build around their superstar center fielder.

It would not be at all surprising for Eppler and the Angels to approach Andrelton about an extension contract in the near future. Normally it is not the best investment to give a long-term contract to a defense-first player who is heading into his late 20’s/early 30’s but Simmons is not normal and his defense is so otherworldly that even if he declines he would still be one of the better shortstops in the game.

Although it may not happen this off-season, it feels like there is a reasonably high probability that Billy will negotiate with Simba’s agent between now and Opening Day 2020. The basis of the deal will likely fall somewhere between Elvis Andrus’ and Troy Tulowitzki’s contract extensions. The former was a touch younger than Andrelton but not as good on defense while the latter already had three 5 1/2 WAR seasons under his belt when he signed his long-term deal.

That extension, assuming it happens in the 2018-2019 off-season, would likely be a 7-8 year deal (restructuring Andrelton’s current contract) with an AAV of about $17M per season for a total range of $119M-$136M. This contract would almost certainly exceed the AAV of Elvis’ and Troy’s extensions, thereby rewarding Simmons for his excellent play and likely providing the Angels with reliable value moving forward.

Even if Andrelton loses a step or two at shortstop he could, in the worst case scenario, shift over to the keystone in his later years if his athleticism and range decline and would likely still provide reasonable value at second base. Players with Simmons defensive ability do not grow on trees and that is the primary reason Eppler acquired him in the first place to build the best foundation for the organization’s up-the-middle defense.

Hopefully Billy will work on keeping Simba in Anaheim as long as possible. In the event Andrelton chooses to explore free agency the Angels should be able to move him prior to the 2020 trade deadline for quite a haul in prospect value, perhaps even matching what we gave up for him in the first place if we are out of contention. Barring something untoward in the future this acquisition is looking like a big win for Billy Eppler and the Angels. Bravo!

Andrelton Simmons, all day, every day!

For the last few years, after Howie Kendrick left, it has been pretty clear that the Angels need to find a long-term solution to settle their second base situation because continuing to get results like those above, in the graph, is the definition of insanity. A total of -0.1 WAR just will not cut it if the Angels want to have sustained success.

Although we said it last year (and the year before), 2018 increasingly appears to be the year the team will finally address this important goal and add the final, fourth element to their exceptional up-the-middle defensive unit of Mike Trout, Andrelton Simmons, and Martin Maldonado.

The Angels had hoped that one of their AA and AAA Minor League options would pan out and possibly fill the role but the three most likely candidates, Kaleb Cowart, Nolan Fontana, and Sherman Johnson have not produced and developed as rapidly as the team needs them to at this moment in time (and it is possible they may never do so).

Cowart of course is the recovering prospect the Angels brought up to the Majors on July 23rd to take a longer look at him over the remainder of the 2017 season. He initially performed well on both sides of the ball but fell off offensively as the season progressed. If Billy is forced to play a prospect, due to market factors, Kaleb could wind up with the job by default.

Behind him the less heralded Nolan Fontana put up a nice season in AAA, Salt Lake City, UT playing for the Bees. In fact the Angels even called him up for a short seven game stretch in the first half of 2017 but he struggled a bit offensively in his first cup of coffee in the Majors. Fontana’s defense is probably a touch better than Cowart’s but both can pick the ball well. Nolan is also a likely default candidate, for Eppler, as he is already on the 40-man roster.

Finally, Fringe Five Superstar Sherman Johnson has also performed well splitting time between AA, Mobile, AL and AAA, Salt Lake City, UT, playing at several positions (1B, 2B, 3B, SS, and LF) in what may be a pivot towards playing in a super utility role when he arrives in Anaheim. He plays good defense and although he does not have as much pop as Fontana or Cowart he does have a bit more speed. If the Angels do not add him to their 40-man roster by mid-to-late November he will likely be a strong Rule V candidate and could depart the franchise to a more playing-time friendly environment.

As we enter the 2017-2018 off-season, Eppler knows that the three internal candidates above probably will not pass muster at this point in time, so he finds himself setting the table for an off-season where there appears to be more readily productive, acquirable options that will not break the Angels piggy bank.

Finding a trade partner is the more likely scenario because the free agent market is lacking an abundance of 2B choices. The top name, Neil Walker, would probably be of interest to the Halos. Behind him it quickly falls off to our old friend Howie Kendrick, the versatile Eduardo Nunez, and short-term Halo Brandon Phillips, and then really drops off a cliff to players like Alexi Amarista and Stephen Drew.

One other interesting name in free agency that the Angels could consider at 2B is Zack Cozart (a natural SS). In his first healthy season in quite a while he posted a career high walk rate (12.1%) and hard hit rate (31.5%). Additionally he had solid splits against LHP and RHP on top of his really good defense.

The bottom line is that the Angels need to improve at the position if they want to avoid a repeat of the last three years. Fortunately there are good defensive options that are realistically available in both free agency (Cozart and to a lesser degree Walker) and trade (Gordon, Hernandez, Garcia, Kipnis, and Kinsler are probably the top defensive choices) so Eppler should be able to find a fit if the price makes sense (and remember our insider knowledge of negotiations is virtually zero).

Below is the author’s best estimate of the most likely targets categorized by total price (payroll and/or prospect cost) in five bins: “High Price to Pay”, “Middle of the Road”, “Bargain Basement”, “Default Solution(s)”, and the last which is the “Author’s Choice”.

Although Dee Gordon is certainly not my favorite selection out of this group (if I had my way we’d pick up Kipnis, Hernandez, Cozart, Urias, or Albies) he does represent the most likely, inexpensive upgrade for the Angels. Dee’s 2017, 3.3 WAR would be a massive improvement over the collective -0.1 WAR that six players produced for us this season! Most importantly if the Angels absorb most or all of Gordon’s salary the prospect price should be relatively low (say a couple of mid to low-tier prospects).

In an off-season where Billy Eppler will have to intelligently allocate payroll and farm system assets, 2B is one of the more likely areas based on market supply, particularly at the mid and lower end, where less spent can be more for the team in 2018 and beyond.

Another alternate, inexpensive option would be Brad Miller who recently underwent core muscle surgery to correct a lingering problem that probably contributed to his poor showing in 2017. He is a former shortstop who hit 30 HR’s in 2016 so he could be a steal from a Rays team that needs to cut salary. Miller could actually play 3B as well but profiles better at 2B.